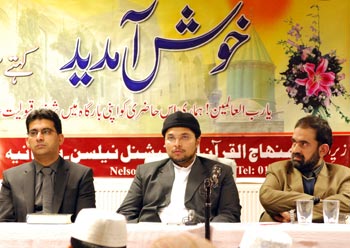 A lecture on "Materialism and Spiritualism" was arranged by MYL Nelson in collaboration with MQI Nelson on 8th January 2010. Brother Adnan Sohail performed the duty as stage secretary. Qari Sayyid Yousuf Shah made beautiful recitation of the Holy Quran and Brother Kabir Hussain from the adjacent town of Burnley, presented a nasheed and then also recited a manqabat in the honour of Hazrat Imam Hussain R.A.

Dr Raheeq Ahmed Abassi, Secretary General of MQI, was then invited to the podium to express his views. He mentioned that we were struggling in our lives in this world due to our emphasis on negatives. Negatives as are demonstrated in our communication, in our dealings with one another, in not practicing patience, not pardoning one another but expecting Allah Almighty to pardon us. He mentioned that because of such behaviour we were not effective at our work for Islam and this also meant that we were preventing others from doing good work, because of our criticism. Dr Raheeq Ahmed Abassi urged the audience to ignore the negatives and look at each other's positives and work in brotherhood to better our and each other’s lives in this world and the hereafter. 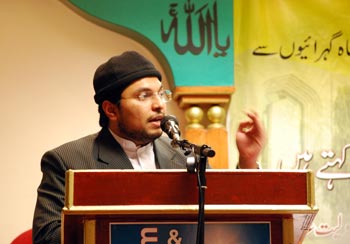 Sahibzada Hussain Mohi-ud-Din Qadri was then invited to deliver his talk. He stressed the importance of education with the Quranic verse “Iqra Be Isme Rabbek Allazi Khalaq”, and gave explanations of three forms of educational status in relation to materialism and spiritualism, by examples:

1) A scholar who has studied hundreds/thousands of books and then drawn a conclusion through comparative study, but the conclusion is not always conducive or conclusive, as the drawn conclusion can be one of confusion based on many conflicting messages from the numerous books studied and therefore we cannot necessarily take the outcome as credible guidance to be put into practice.

2) A Sufi or person of Spiritualism who receives divine guidance and instruction from the Creator. Once the message is received it is uttered by the Sufi and the message is beyond question and just – he who follows the guidance and acts upon the lesson will be on the righteous path. However, you are not always able to prove the message academically, so not everyone would necessarily accept such teachings. 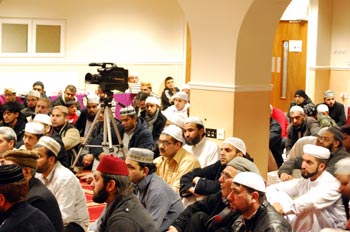 3) Shaykh ul Islam Dr. Muhammad Tahir-ul-Qadri is proving the trueness of the message of Islam on an academic level for everyone to understand and accept without any confusion or questions.

Sahibzada Hussain Mohi-ud-Din Qadri said that we all were capable of receiving guidance for which we needed to purify our hearts. If our heart is not clean and pure, full of spiritual light, it will not correctly receive or transmit the message. Sahibzada Hussain Mohi-ud-Din Qadri gave an example of a telescope and said that unless the refractor lens is clear and in good condition our eye cannot see the image from the other side of the telescope.

Sahibzada Hussain Mohi-ud-Din Qadri finished his talk with 10 minutes briefing in Urdu for the elders in the congregation. He mentioned that we do a lot of good practices for their good such as praying, keeping fast but unless we obtain the spiritual light from these acts – which is only possible by developing our pure intentions and sincere dealings with one another, we cannot obtain the light. And without spiritual light, the good earned from the performance of our acts was useless. He encouraged everyone to do good, practise Islam, but at the same time ensure that with every act spiritual light is obtained and as such our hearts are cleansed of all impurities. 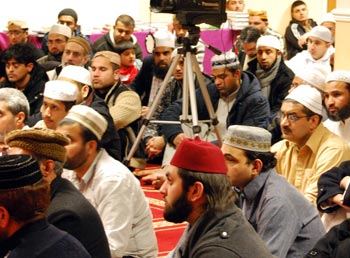 After the inspiring talk, Sahibzada Hussain Mohi-ud-Din Qadri presented an award from the NEC to MQI Nelson for their top position in acquiring MQI life memberships for the year, and one from MQI Nelson to Director of MWF UK, brother Sagheer Akhtar on his efforts and achievements for MWF UK since the demise of late brother Shazad Shaffi.

The programme ended with collective salutations upon the Holy Prophet S.A.W. an extensive and compassionate Dua by Allama Ghulam Rasool (President MQI-USA). 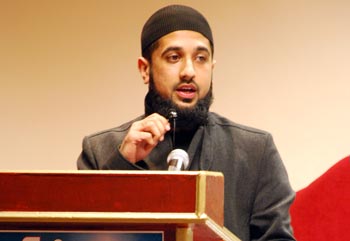 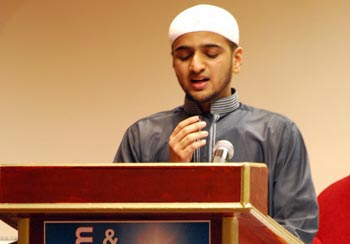 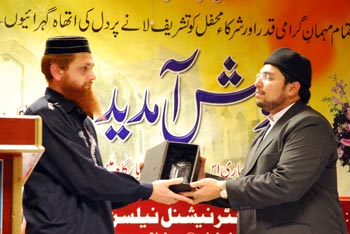 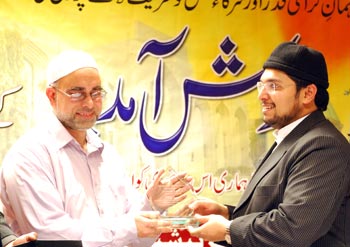