Shaykh-ul-Islam Dr Muhammad Tahir-ul-Qadri has said that change would not come about by becoming part of corrupt and elitist system but by clashing against it. He said that the present electoral system was the biggest enemy of the people and the country.

He said that the ruling elite regarded the people as their slave and their psychology was like that of Pharaohs of Egypt. He declared to return to Pakistan on December 23 this year. The keynote address of Dr Tahir-ul-Qadri was shown around the world through internet technology. 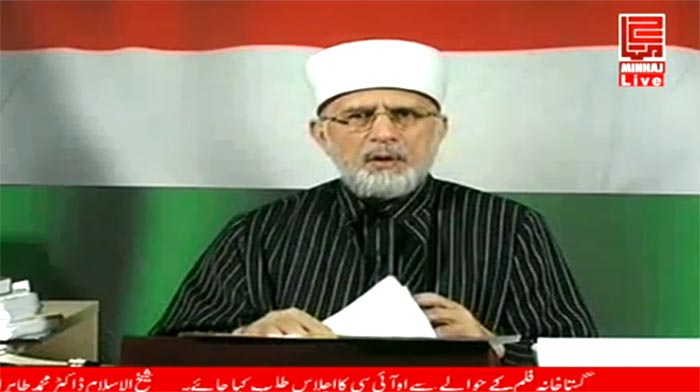 Dr Muhammad Tahir-ul-Qadri expressed these views while addressing Workers Conventions through video conference from Canada. These Conventions were held under the banner of Minhaj-ul-Quran International today in over 25 Tehsils and 100 countries of the world including the main ceremony at the Central Secretariat in Model Town, Lahore today.

Dr Muhammad Tahir-ul-Qadri said that it was wrong to describe the prevalent system as democracy, for democracy denoted exercise of ‘rationality’ and ‘free choice’, while the people were forced to vote along caste, tribal, ethnic and linguistic lines in Pakistan, which was contrary to the spirit of democracy. He said that the system protected the interests of 3% of the privileged elite while 97% of the masses did not have access to the basic necessities of life.

Dr Muhammad Tahir-ul-Qadri said that the assemblies were rubber stamps and debating forums for fabricating lies. He said that in this system, the decisions by the apex court were not being implemented and the people were being punished through price hike, inflation and skyrocketing dearness. He said that the country’s sovereignty was being sold for peanuts and all talk of integrity and sovereignty by the ruling classes was a sham.

Dr Muhammad Tahir-ul-Qadri asked the masses not to allow a handful of privileged people to befool them anymore and initiate effective but peaceful struggle against the current electoral system as it was based on corruption, violation of people’s rights and anti-people policies. He said that MQI’s slogan of change in the system would become the basis of durable change in the society.

Dr Muhammad Tahir-ul-Qadri condemned the brutal assassination attempt on the life of Malala Yousafzai and her fellow students, adding that terrorism originating from radicalism and fundamentalist mindset had undermined peace. He said that the attackers did not merely try to kill innocent Malala but they tried to kill the entire humanity.

He said that the profane movie makers were the worst enemies of humanity and global peace. He asked if the Prime Minister of Pakistan could be sent home for contempt of court, why the government was silent and not knocking on the doors of the International Court of Justice.

Dr Tahir-ul-Qadri said that international law did not allow the making of blasphemous movie. This was the collective matter dealing with respect of religions, which should not be looked at from the angle of freedom of speech. He said that law on respect and sanctity of religions already existed in a number of western countries but it was not being implemented. He said that if the denial of Holocaust was a punishable act, how anyone could justify the injuring of feelings of 1.5 billion Muslims around the world. He said that Old and New Testaments contained references describing blasphemy as a crime publishable with death.

Dr Muhammad Tahir-ul-Qadri highlighted the need of legislation at the UN level to preclude any possibility of such despicable occurrences. He also urged the Muslim countries to work out collective policy on the matter.

Speaking on the occasion, Dr Raheeq Abbasi said that the people of Pakistan would give historic welcome to Dr Muhammad Tahir-ul-Qadri on his arrival at Minar-e-Pakistan on the 23rd of December. He said that preparations had already begun in this regard.