On the auspicious occasion of 66th Independence Day, I extend my deepest greetings to the people of Pakistan including Pakistani expatriate community living overseas who feel so passionately about their motherland. The fact that this year, the 14th of August falls in the holy month of Ramadan makes the occasion all the more blessed. The establishment of Pakistan on the night of 27th Ramadan 65 years ago was not merely a coincidence.

The 14th of August represents a culmination of historical process, which had various layers i.e. political, cultural, civilizational, economic, social and psychological. The way the Muslims of sub-continent braved the heavy odd pitted in their way and rendered every sacrifice for the attainment of Pakistan gives us an idea of what the country means. So overwhelming and deep-rooted was the demand of the Muslims for a separate homeland of their own that the combined opposition of the ruling British and the Hindu majority failed to subdue it despite employment of all tricks in their book. 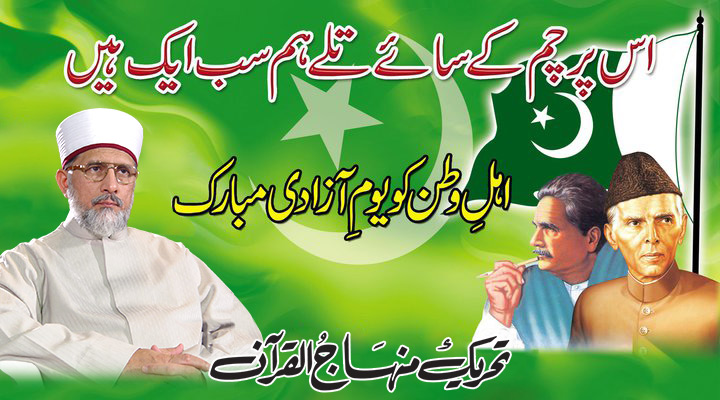 The establishment of Pakistan is also unique in the sense that it was created through a democratic process to showcase to the world that Islam was relevant to the contemporary world and had answers to various questions in different fields. The Objective Resolution adopted in March 1949 sums up what Pakistan was meant to be.

Alas! The successive governments, both civilian and military, that have been holding power for last 65 years, have failed the idea of Pakistan. Today’s Pakistan is direct opposite of what its founding fathers thought it to be. The ship of state is caught up in unchartered waters with little hope of she being able to steer its way to safe shores. Individual and collective chaos has reached climactic point with the result that moral and political values are on the slippery slope at the moment.

The rampancy of intolerance, bigotry, lack of respect for dissent has given the country a bad name globally, contrary to teachings of Islam and vision of Quaid-e-Azam Muhammad Ali Jinnah and Allama Dr Muhammad Iqbal. The country’s security, territorial integrity, and sovereignty have been exposed to fatal dangers due to flawed policies followed hitherto by the ruling elites whose main concern had been to perpetuate themselves in power to the detriment of national interests.

Today’s Pakistan is caught in a vortex of lethal challenges with terrorism and extremism being most daunting of them all. What has compounded these problems is the prevailing situation whereby state institutions remain weak and dictatorial monarchies stay intact in the name of democracy. The political and economic systems have been so structured that chasm between haves and have-nots has been widening by the day. Parliament, which should have been representative of aspirations of the people, remains beholden to a few powerful individuals.

In these grim circumstances, the policy of being mum, inactive and taking everything lying down would do no good to the country, for at stake is the future of 180 million of this country.

On this Independence, it is national duty of each one of us to identify as to what ails this country and what we can do both individually as well as collectively to set it right. We should understand that electoral system is responsible for voting a select privileged group of people into power each time elections are held. Individually, we must be part of efforts to promote awareness about the dangers associated with the current electoral system and collectively we must get together for a larger cause of reforming this system and replacing it with the one, which truly is reflective of people’s aspirations.

On this occasion, I would urge the people of Pakistan to join MQI’s Public Awareness campaign to bring about a change in the country’s system through peaceful means. This country deservers better and it should be our utmost endeavour to make sure that we enable it to earn its rightful place in the global community. Pakistan has the makings of being a successful polity in every respect. What it needs is the installation of right kinds of systems. The Muslims of sub-continent rose to occasion in 1947. History urges the people of Pakistan, as inheritor to proud legacy, to play the same role once again. I am sure we would like to be on the right side of history.