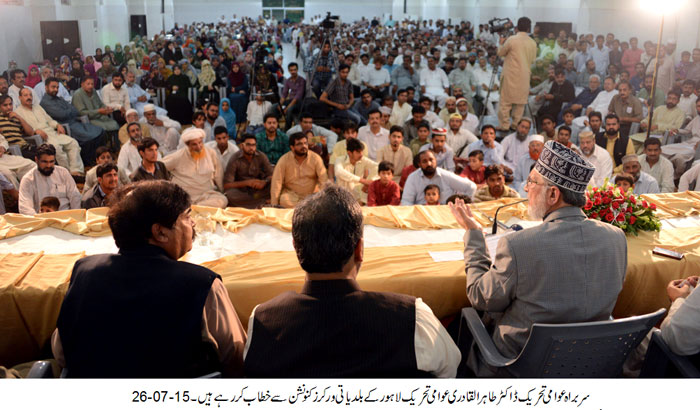 Addressing the workers convention here at the party’s central secretariat on July 26, PAT Chairman Dr Muhammad Tahir-ul-Qadri has said that the resources of the local governments were looted with both hands through appointment of administrators. He said that the PAT would create leadership at the grass-roots who would drive out the looters and plunderers from the corridors of power through political and democratic process. He said that those who have deprived the masses of their constitutional right to vote and stunted the growth of local government institutions through appointment of bureaucrats are the enemies of democracy and the people. He said that the so-called democratic parties did not let the masses become stakeholder in the state resources and powers.

Dr Tahir-ul-Qadri asked the people of Lahore to reject the candidates of the killers of Model Town tragedy. He said that the PAT is waging the struggle for the poor and downtrodden sections of society. He said that the ruling PML-N is the guardian of Qabza mafia, money launderers, hoarders, black marketers and profiteers. He asked the workers to tell the women and the minorities during their election campaign that the PML-N has reduced the number of women seats and snatched from minorities their right to direct election. He said that the people should be told that the powers of the candidates competing for LG polls have been clipped and these are the PAT candidates who would restore the powers and constitutional status of the local government institutions.