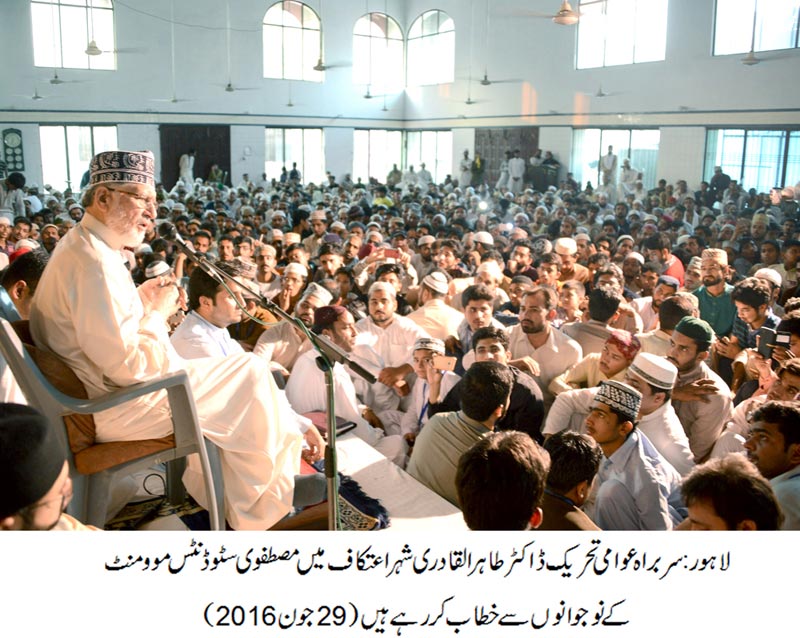 PAT Chairman Dr Muhammad Tahir-ul-Qadri has said that there is an unwritten agreement and a red line between the current rulers and the opposition parties are part of the same corrupt system and none of them ever tries to overstep it. He said that if any third political power threatens the status quo, these guardians of status quo gang up, adding that the Model Town tragedy in which 14 people were killed and 85 were injured is the proof of this. He said that those indulging in corruption are in power and protecting the corrupt system He said that the fate of ToRs committee is enough to open our eyes. He said that rulers and politicians equally thrive on the corruption-ridden system.

Dr Tahir-ul-Qadri paid his rich tributes to the student community and youths for their active participation in the long and revolution marches PAT led against corruption and rigged system. He said that we staged a long march against the unconstitutionally composed Election Commission and its illegally appointed members in January 2013. He said that we also went to the Supreme Court but the status quo parties got together against us. He said that after three years, the government institutions and committees are raising questions about illegality of the ECP members’ pay and perks, which is an endorsement of PAT’s position. He said that the General Elections 2013 were bought by giving pay and perks illegally to the members of ECP whose appointment was not according to law.

The PAT Chairman demanded that investigation should now be carried out into the fact as to under which rules and regulations and in return for which services, the retired members of the ECP were given jobs on hefty pay packages. He said that the rulers spray bullets on us because we talk of revolution, whereas the political parties who are part of the corrupt system only indulge in war of words. He said that the system of deal-making has destroyed national institutions and morale.

Addressing the MSM youth, Dr Qadri said that whichever revolution came in the world, the youth and students were at the forefront of the struggle. He said that they were in the vanguard of the freedom movement under the leadership of the Quaid-e-Azam. He said that it is the downtrodden sections of society who struggle for and bring about revolution. He said that the poor and middle class but committed youth and students who are associated with PAT are endeavouring for peaceful change in Pakistan and these efforts have now been complemented by the blood of the martyrs of Model Town. He said that the sun of oppression is setting and the day is not far when the oppressors will be behind bars and the youth, women and the poor of the country would be ascendant.

The PAT Chairman said that PAT is waging relentless struggle for political awareness. He said that it goes to the credit of the party that it not only challenged the rigged electoral system but also made practical efforts for elimination of terrorism and extremism at the intellectual and scholarly level. He said that its workers staged sit-ins and led long-marches without giving a hoot to the extreme weather conditions, adding that only a final push is required for the crumbling walls.