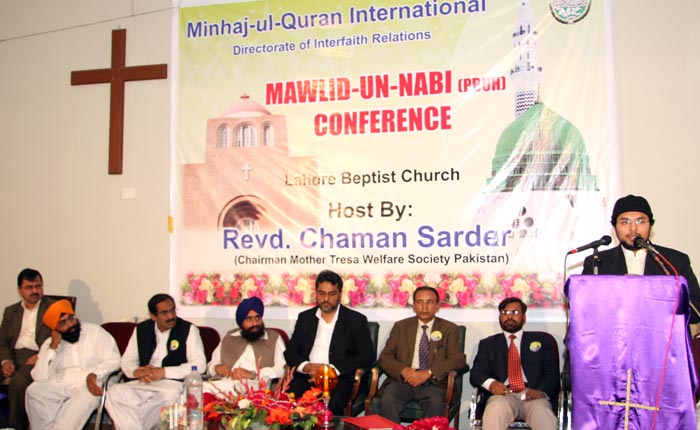 The special Milad ceremony was held in February 2010 in a local Church for the first time in the history of Pakistan. Hosted by Reverend Chaman Sardar, chairman of Mother Teresa Welfare Society and the Christian community in the Baptist Church in Shahadrah Lahore, the ceremony was named as Mawlid-un-Nabi Conference. For centuries on end, the Muslims have been celebrating the birth anniversary of the Holy Prophet (blessings and peace be upon him), which has now become a symbol of cross-cultural and inter-religious harmony and call towards establishing durable peace in the world. 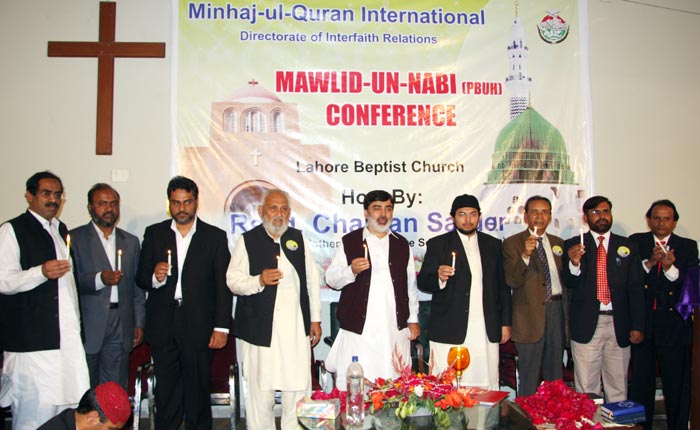 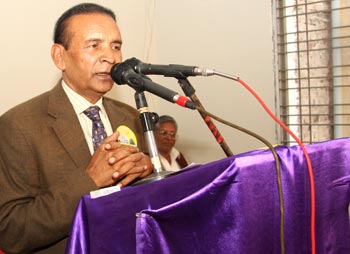 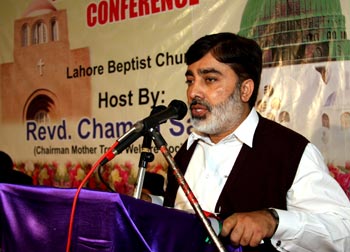 With the recitation from the Holy Quran by Qari Nazeer Ahmad Saeedi, the formal proceedings of the Milad Conference got underway. Pastor Noor recited verses from the Bible, whereas the Choir of the Baptist Church sang the peace song. Sahibzada Iftikhar-ul-Hassan Chishti, Qari Amjad Ali Bilali brothers and Shahzad Ashiq presented Naat. 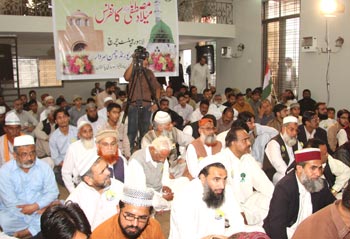 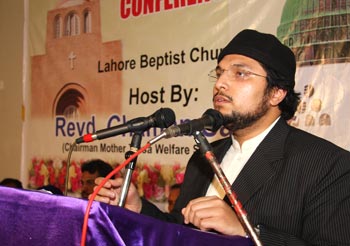 In his welcome address, Reverend Chaman Sardar, the host of the ceremony, said that the Milad celebration in a Church is historic occasion in the history of the sub-continent. This represents a great step forward on the road to interfaith dialogue and harmony and it would be extended to other parts of the country. He said that Dr Muhammad Tahir-ul-Qadri sowed the seed of interfaith harmony, which has now grown into a tree. He said that MQI has been organizing Christmas programmes at its central secretariat every year and the Christians would now celebrate the Milad of the Holy Prophet (blessings and peace be upon him). He garlanded all the respected guests sitting on the main stage. Sahibzada Hussain Mohi-ud-Din Qadri lighted the peace candles with his hands to mark the pleasant atmosphere of interfaith harmony. 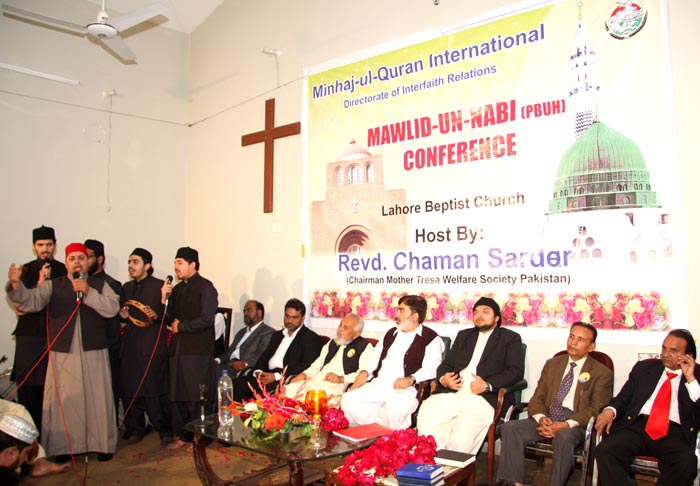 Sohail Ahmad Raza, Director of Interfaith Relations of MQI, said that Shaykh-ul-Islam Dr Muhammad Tahir-ul-Qadri is not merely a leader of the Muslim Umma. Rather he is a leader who loves the entire humanity. The Milad celebration in a Church proved that the Christian community also considers Dr Tahir-ul-Qadri as its leader. He said that the Christian brethren deserved our appreciation and rich tribute for promoting interfaith tolerance through this programme. We need to promote this tradition. He thanked Reverend Chaman Sardar and entire Christian community on the conduct of the Milad programme in the Church. 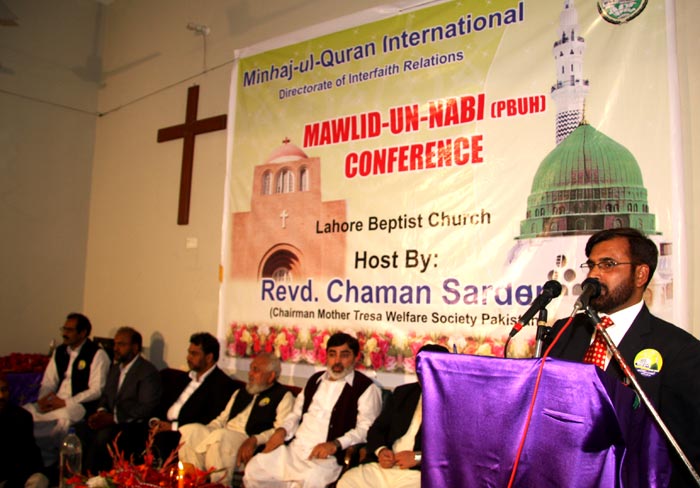 Dr Munawar Chand said in his speech that the followers of all religions should live in harmony in accordance with the instructions of the Quaid-e-Azam. The founder of Pakistan had asked all communities and followers of different religions to respect one another and through the Milad programme; the Christian community has given a strong message to the world that they are desirous of peace in Pakistan. 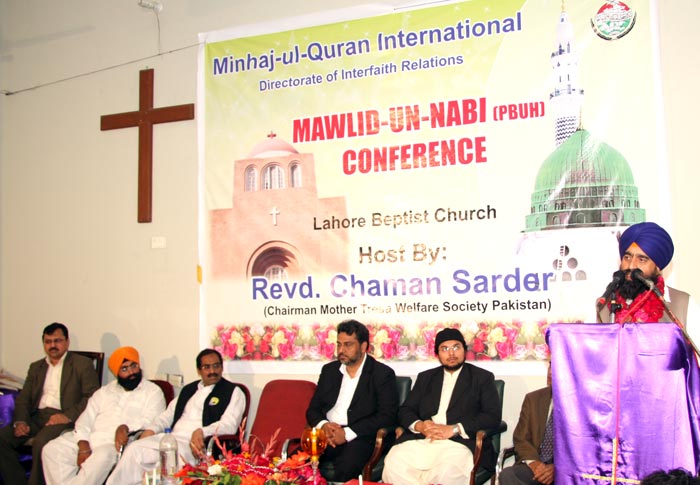 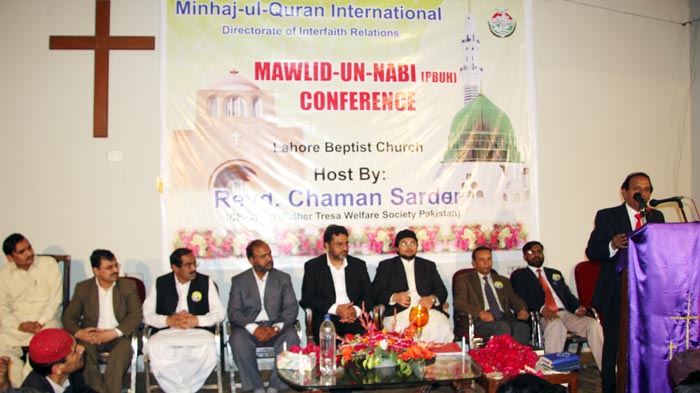 Malik Riaz Ahmad, MNA and PML-N leader, said that Islam is a religion of peace and love and MQI is spreading this message in the world in a very effective manner. The Christian community has also chronicled a glorious chapter in the history by hosting the Milad programme in a Church. He said that it is a matter of immense pride and we need to promote it.

Rana Iqbal Ahmad Khan, MPA, said that minorities enjoy complete freedom and religious independence in Pakistan. The efforts made by Shaykh-ul-Islam Dr Muhammad Tahir-ul-Qadri and MQI to foster interfaith dialogue and peace in the world are commendable. He said that religious harmony is the dire need of the hour for the establishment of peace in the country and MQI is performing this responsibility in an effective manner. 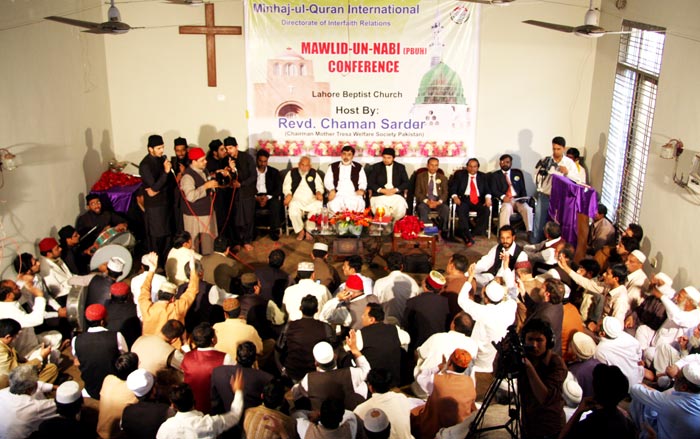 Sahibzada Hussain Mohi-ud-Din Qadri, the chief guest of the ceremony, congratulated Reverend Chaman Sardar on hosting the Milad ceremony. In his speech, he said that Shaykh-ul-Islam Dr Muhammad Tahir-ul-Qadri founded Muslim-Christian Dialogue Forum 12 years ago in compliance with the Sunna of the Holy Prophet (blessings and peace be upon him) wherein he hosted the Christian delegation from Najran and made them stay and worship in the Prophet's Mosque 1400 years ago. 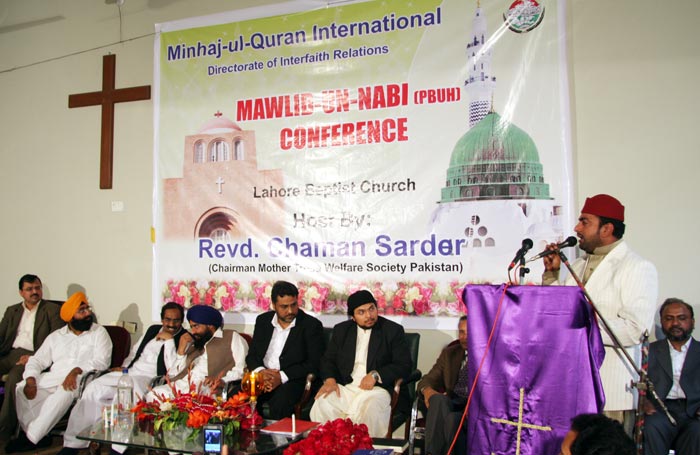 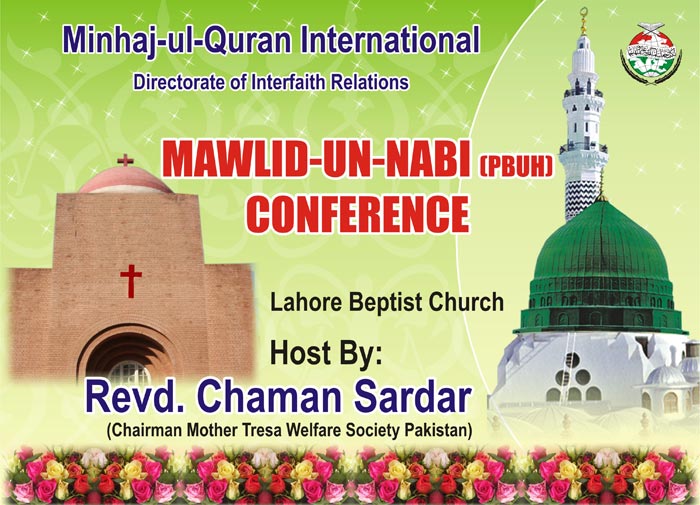 Hussain Mohi-ud-Din Qadri said that there is no extremism and short-sightedness in Islam. A Muslim who says that he follows Islam but does not believe in Hazrat Isa (AS) has nothing to with religion because the rejection of a Prophet or Divine Book is tantamount to rejection of faith. He said that none can be a Muslim unless he believes in all Prophets and past Divine Books and likewise regards Hazrat Maryam as pure and pious. 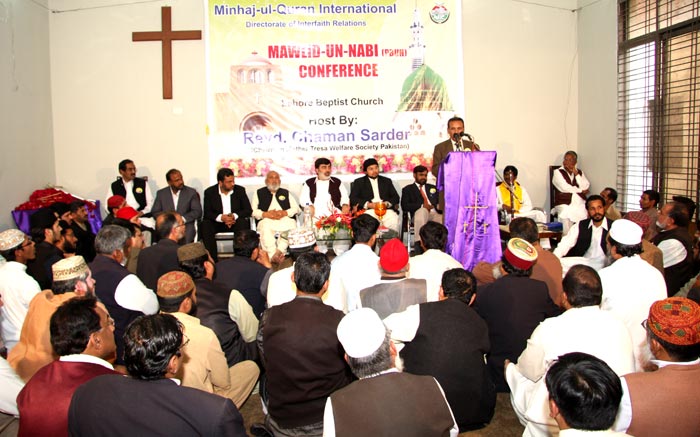 He said that people asked MQI as to why it had been celebrating Christmas for last 12 years while Hazrat Isa (AS) is not our Prophet. He said that holder of such opinion are ignorant and live in manifest error. We have tried our level best to demonstrate harmony and brotherhood by holding the Milad Programme in the Church. Referring to a Hadith, he stated that the Holy Prophet (blessings and peace be upon him) said: "I would bear witness against such a Muslim on the Day of Judgment who happened to kill a non-Muslim." This is the message which MQI and Dr Muhammad Tahir-ul-Qadri are projecting in the world. Shaykh-ul-Islam stands for unity, human development and religious tolerance. 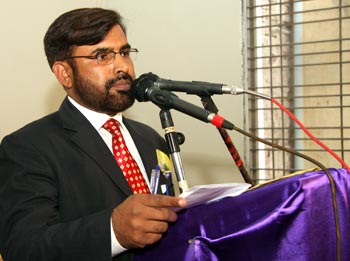 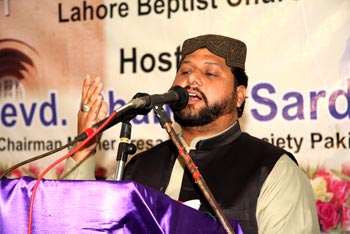 The Christian, Sikh, Hindu and Muslim leaders jointly cut the birthday cake of the Holy Prophet (blessings and peace be upon him) and made special prayer on the occasion. Call for Asr prayer was given in Church and prayer offered. There was arrangement for Milad feast after the conclusion of the programme. 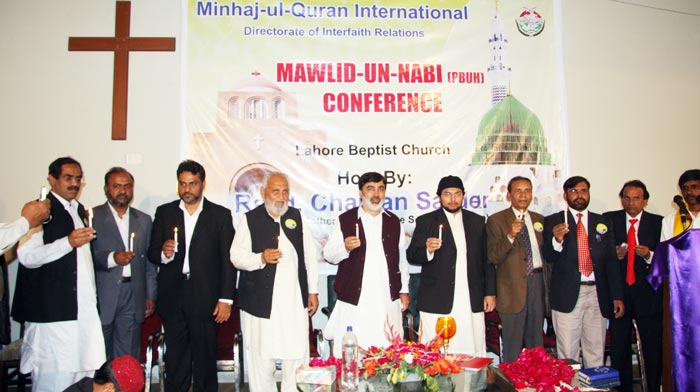 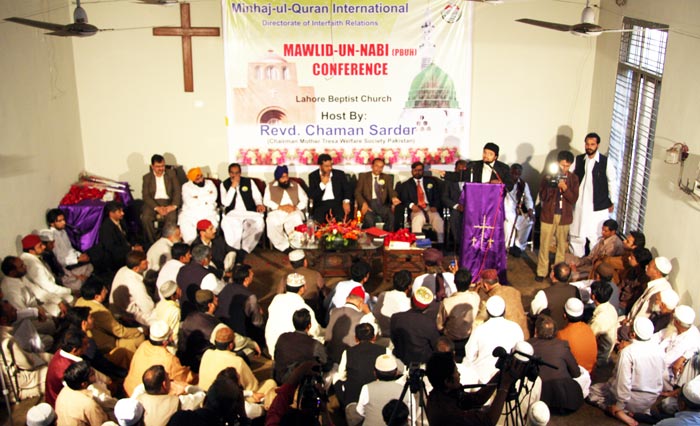 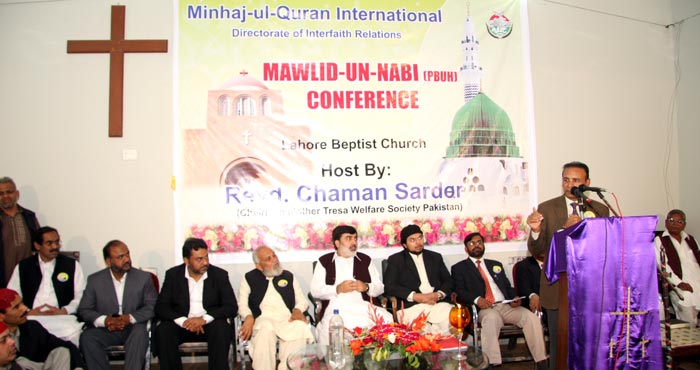 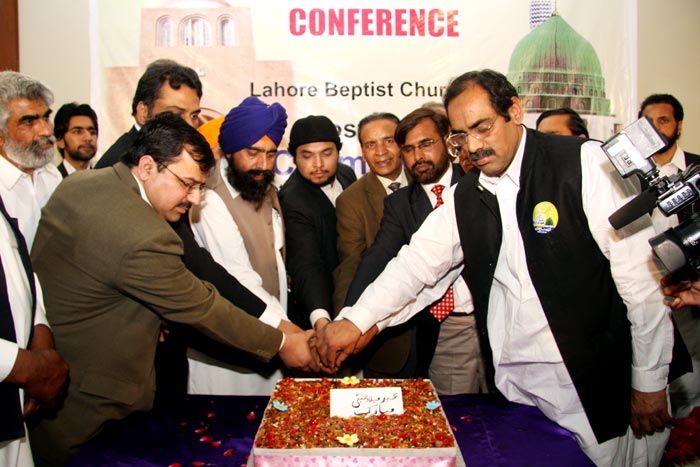 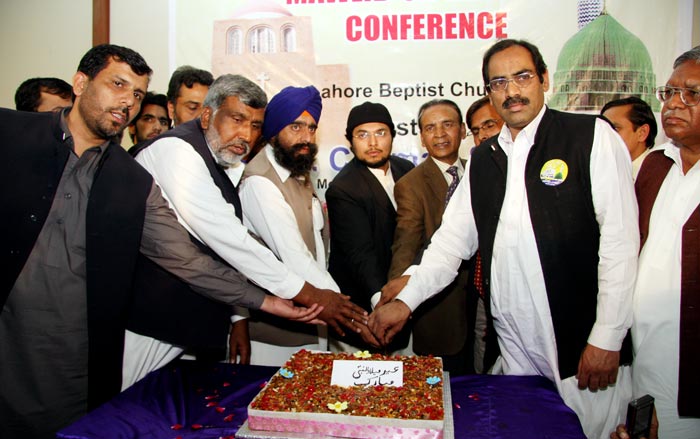 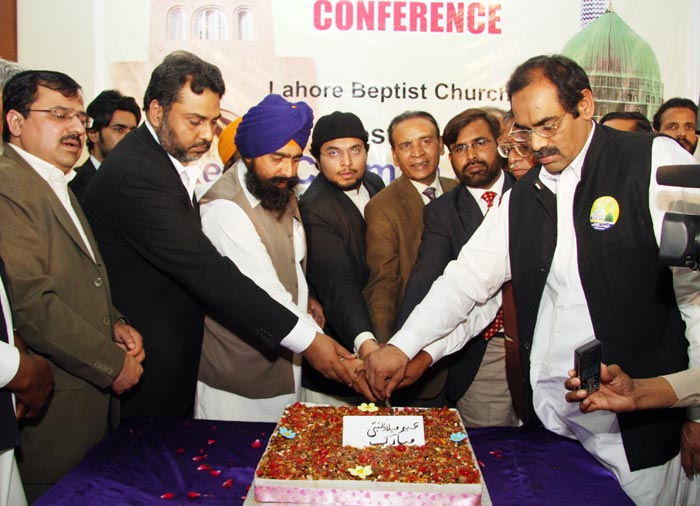 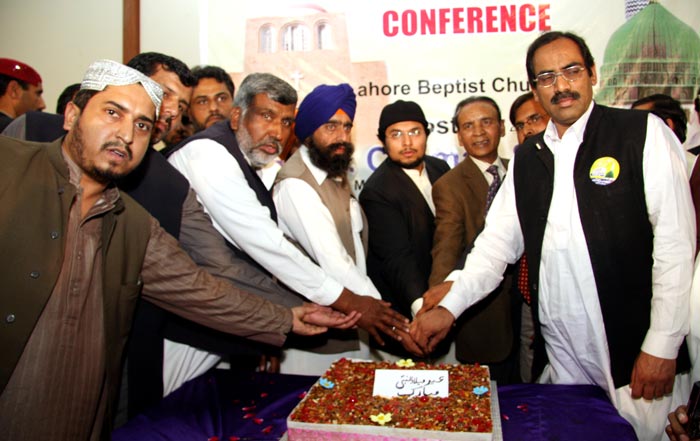 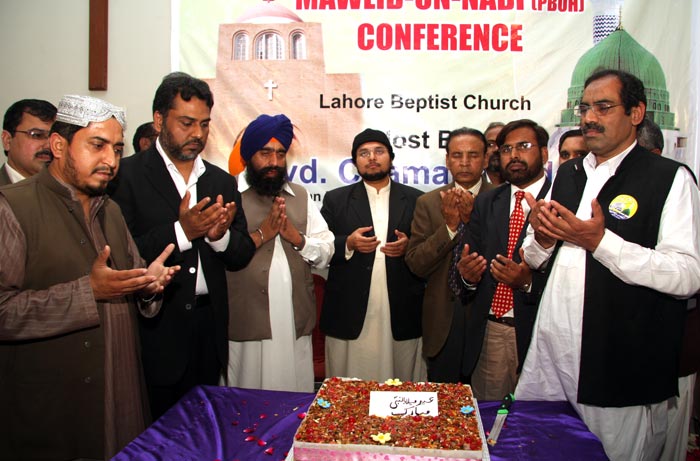