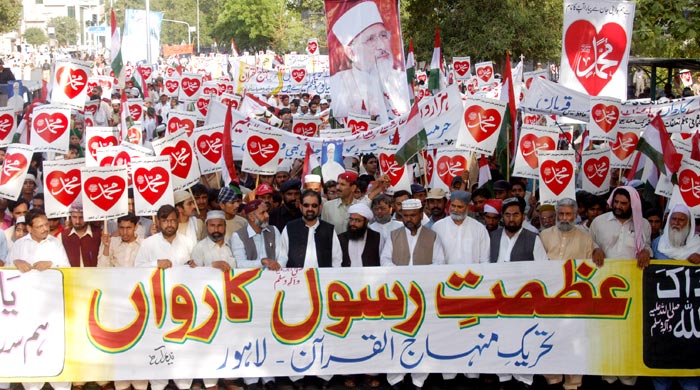 Attended by thousands of people, Minhaj-ul-Quran International organized ‘Azmat-e-Rasool Caravan’ on June 13, 2010, which started off from the Assembly Hall and concluded on Data Darbar. The participation of such a large number of people in the Caravan was the reflection of their love for the Holy Prophet (blessings and peace be upon him) and a stern message to those who were involved in the heinous act of drawing blasphemous sketches of the Holy Prophet (blessings and peace be upon him) that the Prophetic love is the part and parcel of their collective being. Those who have committed this nefarious act are scar on the name of humanity and they should know that the respect of the Holy Prophet (blessings and peace be upon him) is the dearest to the 1.5 billion Muslims living across the world. The hundreds of participants were carrying placards and red posters bearing the name ‘Muhammad (blessings and peace be upon him)’ written inside them. The hundreds of people standing on both sides of the caravan on the pavement had formed a human chain by holding one another’s hands from the Assembly Hall to the Data Darbar. The participants kept on moving ahead by reciting Durood Sharif. 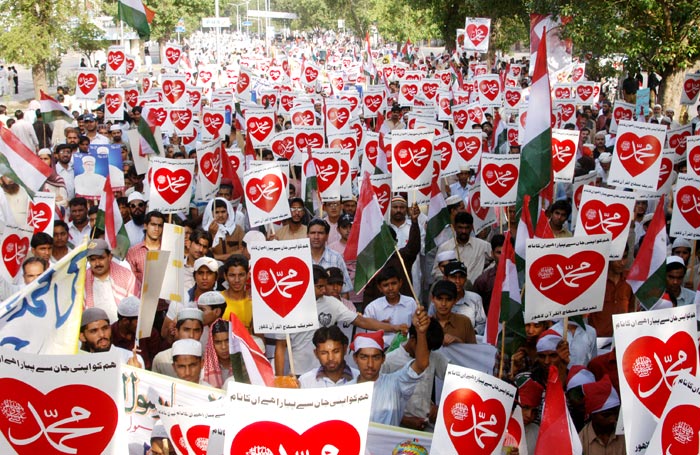 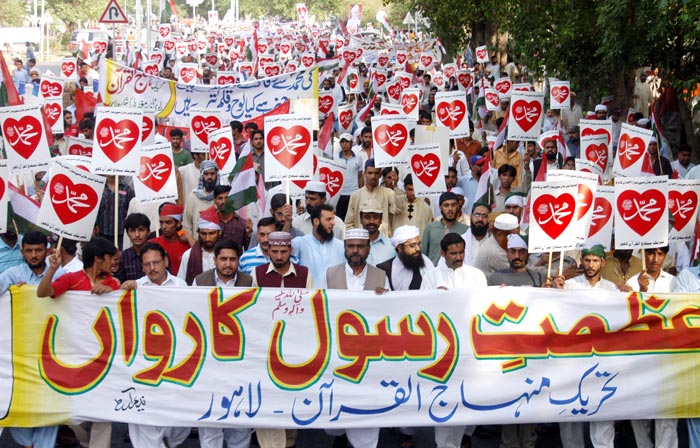 Addressing the participants of the Caravan near Shuhada Mosque, Nazim-e-Ala Dr Raheeq Ahmad Abbasi said that the online posting of blasphemous sketches is an attack on the faith of the over one hundred billion Muslims. The best way to respond to this heinous act is to promote the love and remembrance of the Holy Prophet (blessings and peace be upon him) throughout the world. He asked the Muslims to get united for the expression of their love and respect for the Holy Prophet (blessings and peace be upon him). He declared that MQI would hold conferences throughout the country for the protection of the sanctity of the Prophethood on the upcoming Friday. 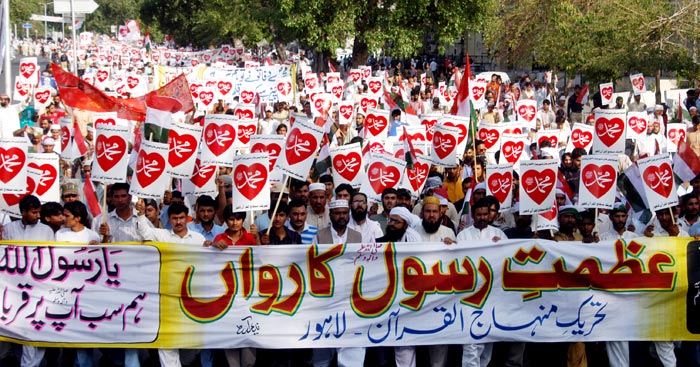 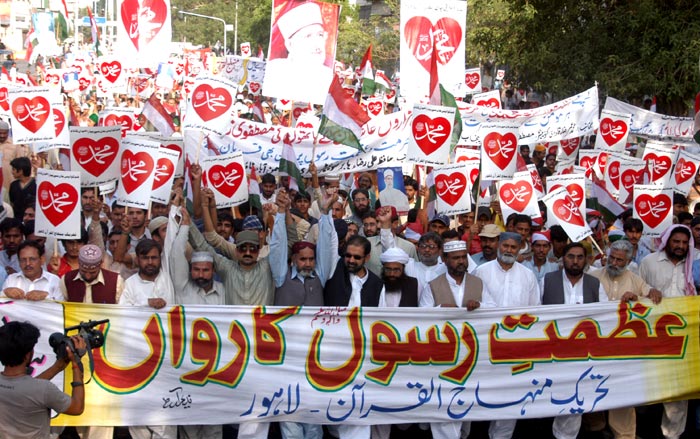 Dr Raheeq Ahmad Abbasi said that the country is caught up in the fire of terrorism and the thousands of participants of the caravan condemn the incidents of terrorism and want to tell the world that those wreaking havoc with human lives have nothing to do with Islam. Condemning the Israeli attack on the Flotilla ship carrying relief goods, he denounced the Israel for its contravention of the UN charter and international law. ‘The decision of the Turkish PM to lead the caravan of relief goods for those besieged in Gaza is a courageous and timely. The other world leaders should also take a leaf from the book of the Turkish leader,” he concluded. He also condemned the UNSC’s decision to place sanctions on Iran and dubbed it as ‘a case of double standard’. 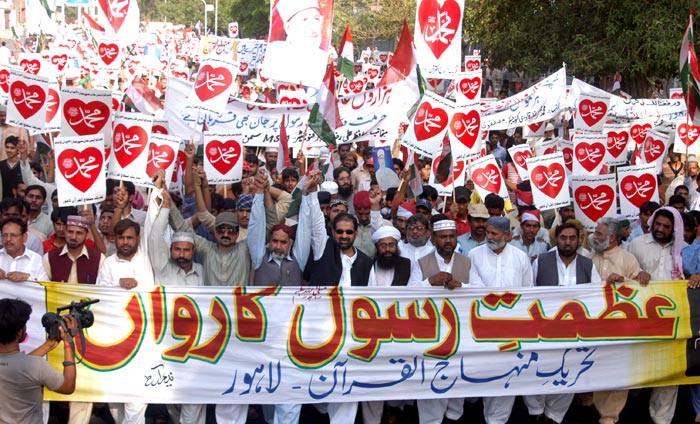 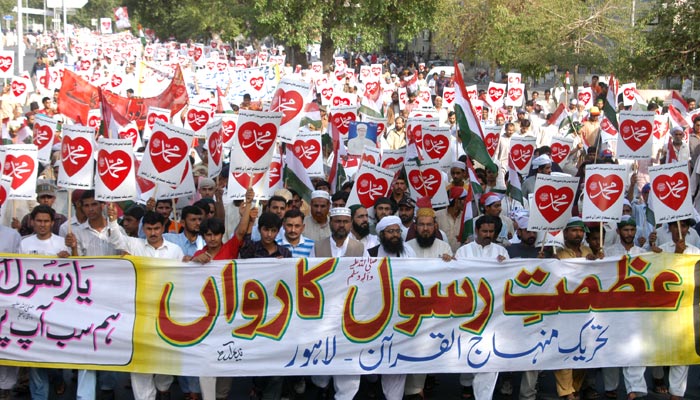 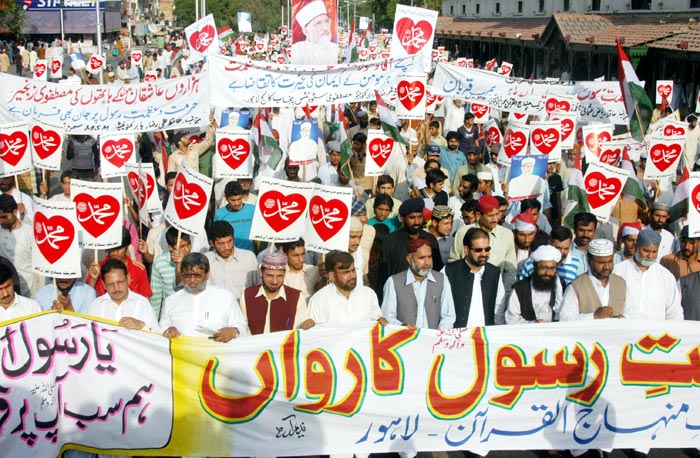 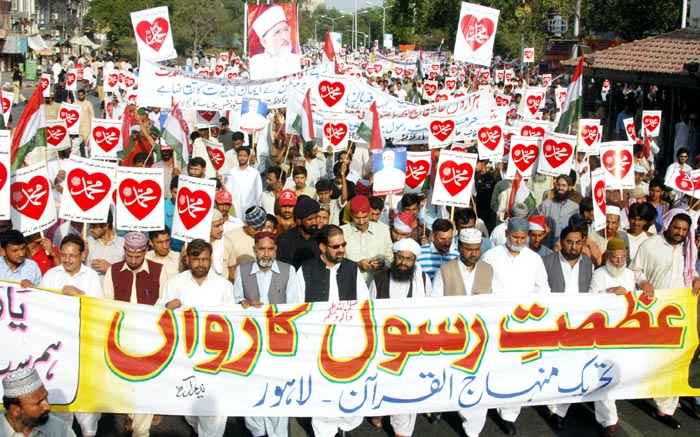