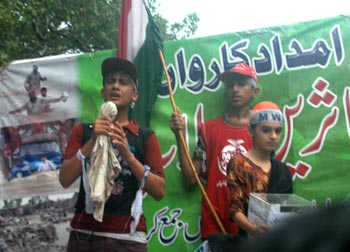 Hundreds of children took part in the ‘Children Relief Walk’ under the Minhaj Welfare Federation from Assembly Hall to Shuhada Mosque in order to show solidarity with the flood stricken children and collect funds for their rescue and rehabilitation today. After the walk, these children visited different markets and collected funds. They were carrying different placards and banners with slogans inscribed on them. These children appealed to 1.5 billion people of Pakistan to donate at least Rs. 100 and thus 15 billion rupees can be collected in this way. A few placards showed slogans against the governmental inaction, while others bore appeal to the affluent sections of society to donate generously for the relief and rehabilitation of the flood victims.

The children also demanded of the Muslim countries to come forward and do something for the suffering people of Pakistan before it is too late. According to the UN report, 3.5 million children are in urgent need of medication, food and clean drinking water to save their lives. They said that if timely action is not taken, these children face the prospect of severe starvation, and outbreak of epidemics, which can result into colossal loss of lives. 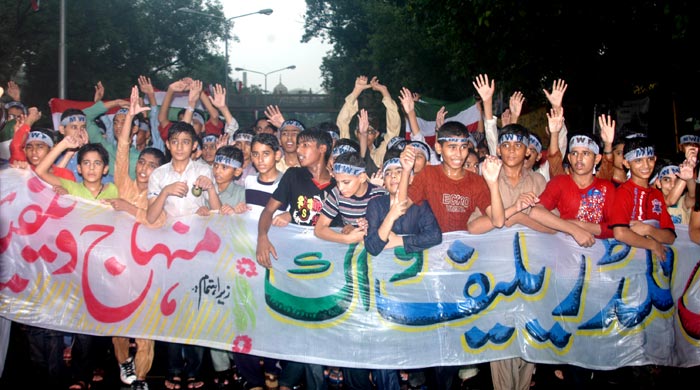 The purpose of the walk was to spread awareness about the magnitude of the crisis and highlight the plight of the children. The message that the children put across is that all of us need to play our role according to our respective financial capacity, for it is not possible for individuals to face this calamity on their own. The children fervently pleaded to the affluent sections to leave no stone unturned in that regard. The rally was also attended by Muhammad Mustafa (G.M. Malik), Sajid Mahmood Bhatti, Iftikhar Shah Bokhari, Raja Jamil Ajmal, Iftikhar Baig, Irshad Tahir, Ishtiaq Hanif Mughal, Hafizullah Javed, Afzal Gujjar, Hafiz Ghulam Farid and other leaders.