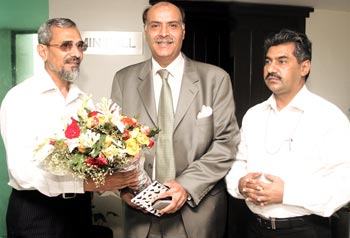 The Deputy Secretary General MQI (PR), Mr GM Malik, called on the new elected president of Lahore Chamber of Commerce and Industries (LCCI) Mr. Shahid Malik in his office. He extended ti him his warm felicitations on taking over as the new President LCCI and expressed best wishes for his success.

Mr Malik briefed him on the colossal efforts Shaykh-ul-Islam is doing in pursuit of global peace, interfaith harmony, promoting the culture of love, moderation and tolerance and bringing the civilizations closer. The President of LCCI appreciated the accomplishments of Shaykh-ul-Islam in the field of religion, education and social walks of life, especially projecting the true face of Islam at global level, thus thwarting the heinous activities and propaganda of the extremist forces engaged in defaming Islam and maligning its invincible position.

GM Malik presented him a copy of Irfan-ul-Quran, the translation of the Holy Quran wrought by Shaykh-ul-Islam and a bouquet of flowers and invited him to visit the central secretariat of Minhaj-ul-Quran International. Nasir Iqbal Advocate also attended the meeting.