In his message to the nation on the 65th Independence Day, Shaykh-ul-Islam Dr Muhammad Tahir-ul-Qadri has said "we have wasted six decades and real independence is still far away from us. He said that we do have our identity on the map of the world as a separate country but the people have been forced to live like slaves within the country. “The leadership crisis that the country faced after the demise of the Quaid-e-Azam is still the biggest problem of the country. A few families have the sole right to rule, while the people continue to suffer.”

Dr Muhammad Tahir-ul-Qadri said that serious questions have been raised with regard to our sovereignty. The state institutions are in a position of clash. He said that the country’s economy has been hit hard due to the worst energy crisis and the government has not woken up to the urgency of resolving this problem. He stated that monopolization of power by a minority of elite has resulted in disempowerment of the countrymen who are having to bear the brunt of skyrocketing inflation, unemployment and poverty. He said that people’s fate would not change unless the present system, which is responsible for their predicaments, is sent packing. He asked the people to launch awareness campaign in this regard.

Dr Muhammad Tahir-ul-Qadri paid glowing tribute to leadership of the Quaid-e-Azam Muhammad Ali Jinnah who led a relentless struggle for the establishment of Pakistan. He said that it was the Quaid’s leadership which marshaled the Muslims into a formidable force. He said that it was power of conviction and a sense of purpose which enabled the Muslims to face heavy odds and carve out a separate homeland for the Muslims despite combined opposition of the ruling British and the Indian National Congress. He said that the Quaid’s slogan of ‘unity, faith and discipline’ can still serve a binding force to steer the nation out of myriad problems. He congratulated the people of Pakistan on the 65th Independence Day. 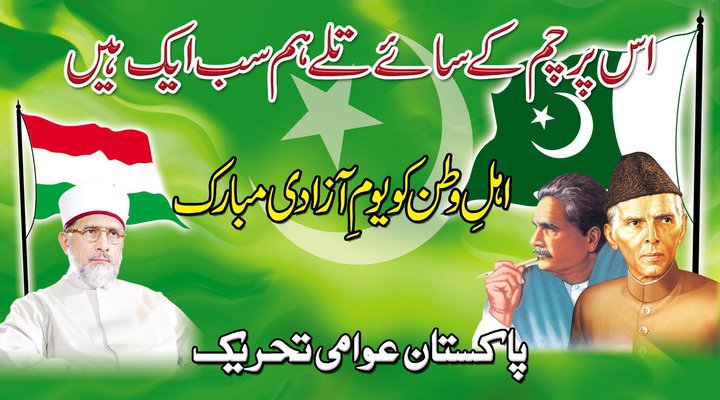