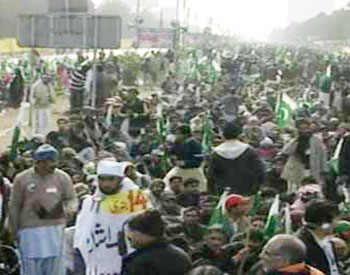 In Jhelum, witnesses saw men, women and children carrying Pakistani flags and piled onto the rooftops of buses, flashing victory signs as part of a five-kilometre convoy of cars, trucks, motorcycles and other vehicles.

Anthems blasted out of loudspeakers as protesters danced to drumbeats and residents lined both sides of the road, showering the crowd with rose petals.

Many of those taking part in the protest are long-standing followers of Qadri and activists in his TMQ movement, which has a network of religious and educational institutions in Pakistan and all over the world.

The convoy left the eastern city of Lahore on Sunday for Islamabad and police say thousands of officers have been deployed along the route of the march, including more than a dozen police vehicles guarding Qadri.

Mobile phone networks have been shut down en route, a precaution designed to stop the Taliban and other Islamist militant groups detonating bombs.