Pakistani police break up marchers for political reform in Islamabad

The protesters respond by throwing rocks and crushing cars. The clashes between the protesters and police are under way just a few residential quarters away from the building of the Pakistani Parliament. 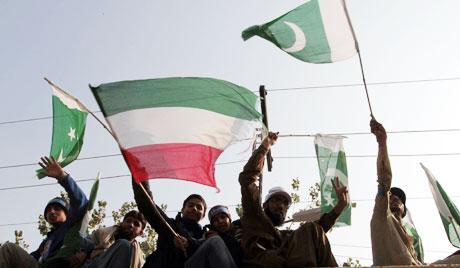 On Monday, tens of thousands of supporters of the Minhaj-ul-Koran, or the Way of the Koran, movement marched into Pakistan’s capital Islamabad protesting against corruption and lawlessness.

The protesters demand that parliament be dissolved and that the President resign, they claim they will protest until their demands are met. According to the France Presse news agency, the strength of the marchers is estimated at some 50,000.

Pakistani anti-corruption march due in Islamabad

An influential Pakistani preacher and thousands of his supporters are due to reach Islamabad on Monday as part of a "long march" against corruption.

Tahirul Qadri, a preacher who returned to Pakistan from Canada last month, is leading a call for electoral reforms.

He left the city of Lahore on Sunday with thousands of supporters, with the intention of gathering more support on the way to the capital.

Pakistan is due to hold general elections in a few months' time.

Speaking to reporters before the march began, Qadri said he wanted measures put in place to prevent corrupt people or criminals from standing for elected office.

He also wants the military and judiciary to be involved in installing a caretaker government to oversee the forthcoming elections.

The government is due to disband in March, and elections must then be held within six weeks.

By Sunday evening the organisers claimed that around 200,000 people had joined the slow-moving convoy of cars, buses and trucks headed for Islamabad, but this could not be confirmed independently and police did not give their own estimate.