Addressing a press conference in Lahore, Dr Muhammad Tahir-ul-Qadri has said that the nation has got tremendous advantages from the Long March in addition to advancement of agenda of electoral reforms. He said that Pakistan’s image improved in the world and the Pakistani people emerged as civilized and peace loving people in the comity of nations.

Dr Tahir-ul-Qadri said that he wanted to knit disparate elements into one unified whole. He said that rat race was order of the day and patriotism was on the wane. He said that no effective voice was raised against terrorism, inflation, deteriorating law and order situation, and corruption in last five years. He said that we saved Parliament and opened the door for reforms as well. He held that we provided a good beginning and used the power of peace to get our demands accepted. 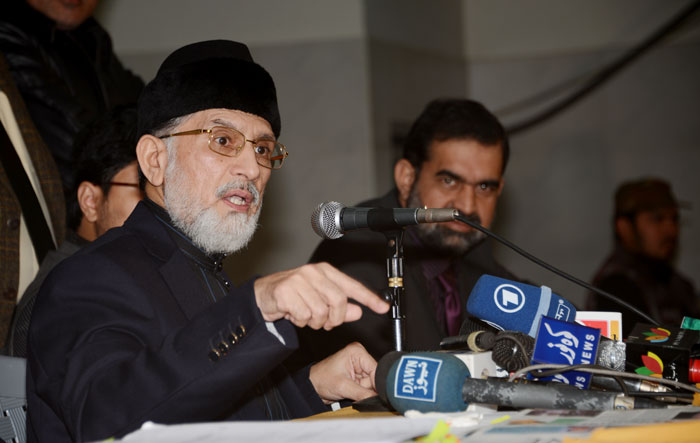 Dr Tahir-ul-Qadri said that all great wars and rivalries always came to end through an agreement, adding that to say that agreement was a piece of paper was not true. He said that he struck deal with the government, further holding that even if the present government was no more, the agreement would continue to hold water. He said that mechanism would be determined in a meeting between the government’s team and MQI on January 27. He said that it was not possible for political parties to run away from Articles 62, 63, Supreme Court’s judgment on electoral reforms and People’s Representation Act 1976.

Dr Qadri said that he propounded the concept of social, religious and political service as well as welfare of the downtrodden sections of society 32 years ago and it was due to the training of three decades that the Long March remained peaceful. He said that MQI provided an intellectual guidance to the nation that if the leadership was competent, honest and credible, the nation was ready to offer any sacrifice and move forward on the path of development. He said that he led the Long March for Allah’s pleasure and service of the people of Pakistan. He said that he had been struggling to project real and peaceful image of Islam and Pakistan in the world for last four years. He said that a book published in the US clearly stated that the people were exposed to Islam’s real image because of him.

Dr Tahir-ul-Qadri felicitated the marchers on being an incarnation of steadfastness, courage and perseverance who set a new example of extreme dedication to people’s cause in the country’s history irrespective clear and manifest threats. He said that the Pakistani nation was proud of the marchers.