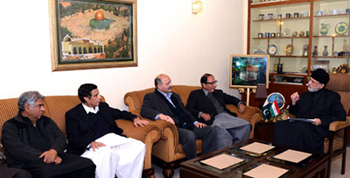 Talking to the media after the meeting, Dr Muhammad Tahir-ul-Qadri said that PML-Q delegation discussed initial proposals about caretaker Prime Minister and Chief Ministers and dissolution of assemblies. He however added that the meeting was more of an informal chat and conclusive discussions would take place next week when the government’s team would hold a meeting with him. He said that Federal Minister for Law and Justice Farooq Naek and Minister for Information Qamar Zaman Kaira would also attend that meeting.

Dr Tahir-ul-Qadri said that he had reservations on the proposals given by PML-Q but added that things would take conclusive shape in the forthcoming meeting some time later next week. He said that despite the meetings lengthening out, PAT would launch a public contact campaign in the form of revolution marches from February 15 onward. He said that a mammoth public meeting would be held in Gujranwala on February 15 followed by more such meetings in Faisalabad and Multan on Feb 17 and 22.

Speaking to the media men, PML-Q head Chaudhry Shujaat Hussain said that the meeting discussed legal matters pertaining to the Long March Declaration. He said that the government’s team would hold a meeting next week which would be attended by Ministers for Law and Information and Broadcasting. 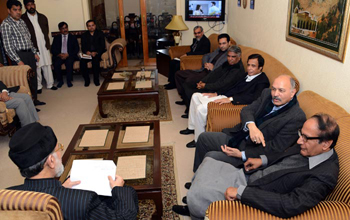