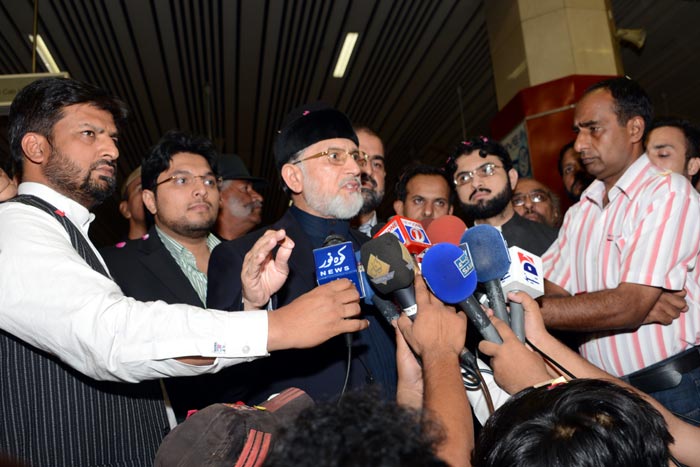 Pakistan Awami Tehreek leader Dr Muhammad Tahir-ul-Qadri has said that polling day sit-ins are not meant to disrupt the electoral exercise, adding that they are a vote against the incumbent electoral system. He said that elections taking place under the current system would return the same crop of corrupt politicians, rascals, tax cheats and loan defaulters back to power, which would be the biggest joke the with the nation. He said that the Election Commission was unconstitutionally composed and a culprit of the nation. He said that those presiding over the elections were deaf, dumb and blind. He said that PAT would not support the system of corruption.

Dr Muhammad Tahir-ul-Qadri expressed these views while talking to reporters at the Allama Iqbal International Airport, Lahore the other day upon his return from abroad. PAT’s national, provincial and local leadership was present at the airport to extend a warm welcome to their leader. The thousands of PAT workers were carrying placards and banners with anti-system slogans written on them.

Dr Muhammad Tahir-ul-Qadri said that if the people wanted to protect their future, they should become part of these sit-ins in their hundreds of thousands. He said that PAT’s public sit-ins would prove to be referendum against the pro-elite and anti-state electoral system and the 11th of May would see the demise of the corrupt system along with its protectors. He said that the polling day sit-ins would lay the foundation-stone for real change in the country, adding that attending these sit-ins was the national obligation of all Pakistanis.

Dr Tahir-ul-Qadri said that voting under the present system was akin to supporting corruption and misrule in the country. He said that stink emanating from the rotten system would engulf the entire nation after the elections leading to intensification of terrorism and strengthening of corrupt practices in the country. He said that the masses did not know as to how big a fraud was being committed with them in the name of elections. He said that the present system of elections was a grave conspiracy against the independence of the country as it bound rulers to take decisions for perpetuation of status quo and corruption-based system.

Dr Qadri maintained that the only way to achieve national progress, prosperity and deliverance lay in the rejection of the incumbent electoral system. He said that we had clarified it time and again that PAT was not against elections but the system of elections. He said that the polling stations could wear deserted look as the people would register their disapproval of the system by participating in PAT’s public sit-ins. He said that PAT’s slogan ‘We will have to fight against corrupt system, there will surely be sit-in’ had become popular slogan in the country, adding that elections duly approved by PAT would be considered to have been free, fair and transparent. He said that the ECP and corrupt mafia had ganged up to save the current corrupt system. He said that people understood the nexus and were determined to frustrate this conspiracy. 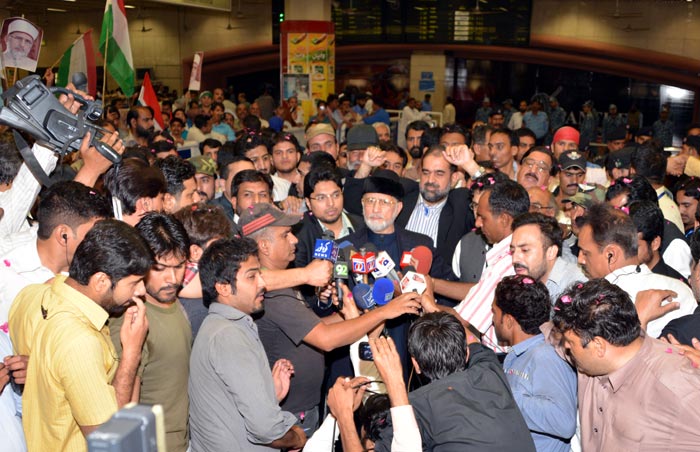