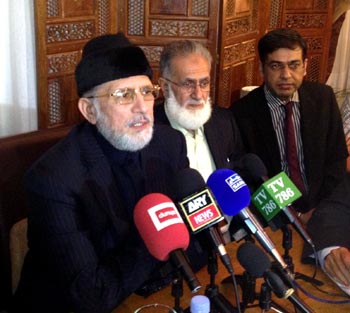 The war against Syria is part of global agenda. The power and wealth of some of the Islamic countries is lending a helping hand in this regard. Pakistan has the most inapt, cowardly and unwise people at the helm of affairs at the moment. If Imran Khan rises for demolition of the present system, he will find PAT standing by him. Those slave to their interests, prefer to join the bandwagon, whereas Pakistan needs a leadership that is courageous enough to say No to international diktats.

These views were expressed by PAT leader Dr Muhammad Tahir-ul-Qadri while talking to Pakistani journalists in London on August 29. In ‘Meet the Press’ programme, Dr Tahir-ul-Qadri gave blunt answers to dozens of questions ranging from political situation in Pakistan to international situation currently obtaining in the world.

Dr Muhammad Tahir-ul-Qadri made it clear that sectarian differences never existed in Iraq, Syria and Egypt and no sectarian-based violent activities took place in these countries. He said that the international powers were crating ‘situations’ in these countries by using their trained ‘Talibans and Al-Qaeda accomplices’ that could justify their intervention in accordance with carefully calibrated strategy. The impending military action in Syria is part of this grand strategy, he said.

Dr Tahir-ul-Qadri disclosed that influence and wealth of some of the Muslim countries was coming in handy to translate the strategy into action. He warned that these conspiracies would finally culminate in intervention in Pakistan. He said that the terrorists who were got freed from Pakistani jails were being used against the country. He said that our incompetent leadership was at a loss to understand this deep rooted conspiracy. He said that the country needed a leadership, whose independence was not compromised by greed for power, business and protection of vested interests and who had the courage to say no to the ever increasing international demands.

Replying to a question regarding Imran Khan’s support of his point of view, Dr Tahir-ul-Qadri said that the matters had gone well beyond the point of support. He said that it was time for action and advised Imran Khan to launch a struggle for change in the system by standing shoulder to shoulder with Pakistan Awami Tehreek. He warned that if those seeking change did not act against the system, the incumbent elitist system had the potential of metamorphosing them. He said that the system was structured for the protection of vested interests of the privileged elite, while the poor and downtrodden sections of society were bound to suffer under it. He said that the system could not guarantee national progress and prosperity.

In reply to another question, Dr Tahir-ul-Qadri asked the Pakistani nation to wake up from slumber. He said that PAT gave a call to prayer (Azan) in the forms of mammoth meeting on December 23 and the Long March on January 14, adding that now the next phase of preparing 10 million Namazis was underway. He said that we wanted to give an opportunity to the incumbents to bring about improvements and reforms in the country.

Dr Tahir-ul-Qadri also threw light on the broad contours of his alternative system which revolved around decentralization and devolution of power from the centre to the union councils at the grassroots. He said that all Divisions would be made provinces under his scheme of things and provincial cabinets would be done away with the executive setup having been headed by Governors. He said that he wanted the system to strengthen the institutions and ensure inbuilt accountability for enhanced output and effective delivery of services.

Condemning the Balochistan’s government’s attempt to muzzle media, Dr Qadri said that media was playing its due role for the good of the society. He said that freedom of expression was guaranteed under the Constitution and his party would stand by media against the government’s excesses. 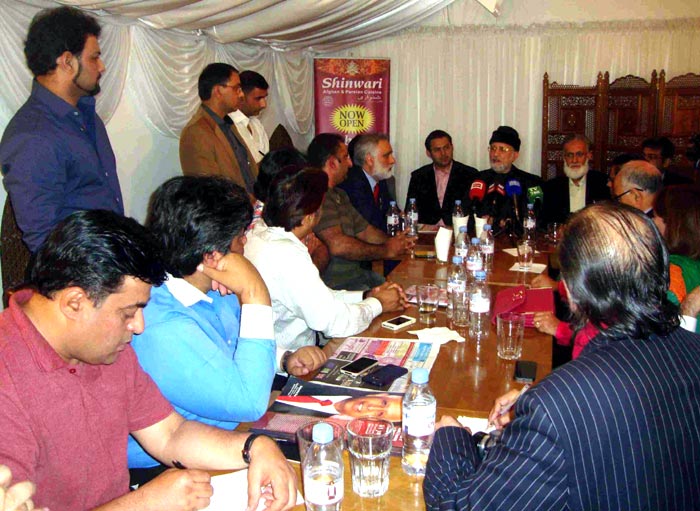