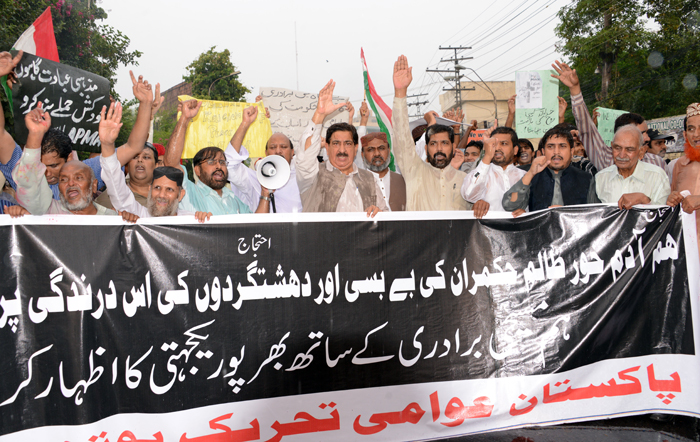 The Lahore chapter of Pakistan Awami Tehreek & Interfaith Relations of MQI organized a demonstration to protest suicide attacks on a church in Peshawar in front of Lahore Press Club today. The protesters strongly condemned the brutal act of killing innocent people belonging to the Christian community. Key leaders of Christian community including Dr James Chanan, Dr Francis Nadim, Revd. Fr. Pascul Polous, Bishop Akram Gill, and Dr Majid Abel, Dr Kanwal Feroz attended the demonstration. The protesters were carrying placards and banners with anti-terrorism slogans written on them. A good number of women also attended the demonstration to express their solidarity with the brothers and sisters of the Christian community.

Addressing the demonstration, Khurram Nawaz Gandapur, Secretary General of Pakistan Awami Tehreek, declared 3-day mourning and described the senseless and brutal attack as an attack on security and solidarity of Pakistan. He said that it was a national tragedy which had grieved every citizen of the country. He said that corrupt and exploitative electoral system had completely failed to protect the masses. He said that the powers that be should remember that if they left the people at the mercy of terrorists they would not be able to escape the public wrath. He said that Quaid-e-Azam’s Pakistan was established to give complete protection to life, honour and property to the non-Muslim citizens of the country. He, however, added in the same breath that while the animals were safe here, the blood of innocent people was being shed like water. 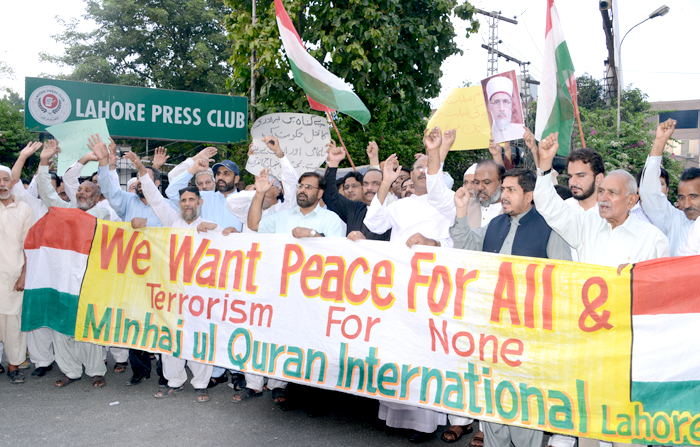 PAT Secretary General said that terrorism could not be wished away by issuance of clichéd statements, further saying that tough actions were needed to stem the scourge. He said that those who were advocating the option of talks with terrorists lived in fools’ paradise. He said that terrorism was a blot on the face of Pakistan. He demanded that the government would have to give up the policy of appeasement and expediency and take a firm stand against those who had challenged the state of Pakistan.

Khurram Nawaz Gandapur said that Pakistan had been a victim to terrorism for well over a decade now and there appeared to be little resolve or strategy to deal with this menace. He said that unending flurry of terrorist activities conveyed an image of Pakistan being an unsafe country the world over. He said that PAT and MQI always raised the banner of rights of the non-Muslim citizens. He said that we were with our Christian brothers and sisters at this great trial and tribulations. He said that PAT and MQI would mourn the national tragedy for three days both inside and outside Pakistan to express their solidarity with the members of the Christian community. 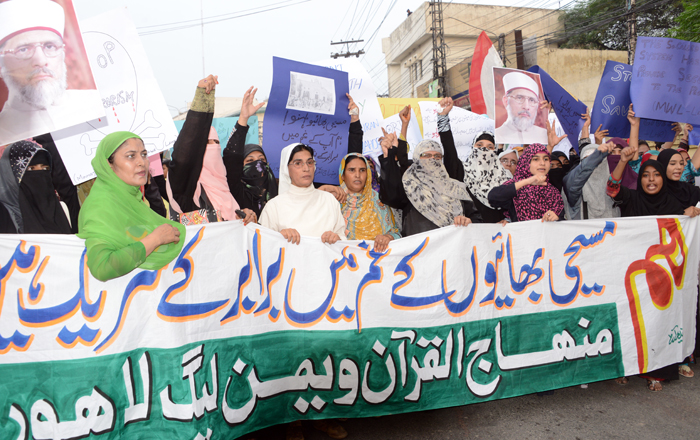 Addressing the demonstration, President of MQI (Lahore chapter) Irshad Ahmad Tahir said that a handful of beasts in the garb of humans had eaten into the vitals of peace in the society. He said that talking about holding negotiations with such beasts was akin to rejecting the reality. He said that the entire nation was protesting against the gruesome massacre of the innocent members of Christian community. He said that it was about time we came out of our comfort zones and took decisions in the best interest of the state and society.

In his remarks on the occasion, General Secretary of MQI (Lahore) Ghulam Farid said that it was not possible to eliminate terrorism from the society without changing the policy of appeasement and good-Taliban and bad-Taliban. He said that clear-headedness was required at policy level to achieve the requisite results. He said that attack on the Christian community was an attack on the Pakistani nationhood. He said that the entire nation condemned this brutal killing of humanity.