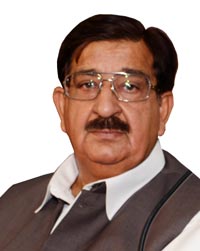 After detailed consultation with the central leadership and workers, Shaky-ul-Islam Dr Muhammad Tahir-ul-Qadri has appointed Khurram Nawaz Gandapur as a new Secretary General of Minhaj-ul-Quran International. He has taken over the responsibilities of new office. Dr Muhammad Tahir-ul-Qadri and the central leadership of PAT and MQI congratulated Khurram Nawaz Gandapur on assumption of the office and wished him best of luck.

The family of Khurram Nawaz Gandapur has been associated with MQI since 1989. He got his early education from Abbottabad. After graduating from the Peshawar University, he joined Pakistan Army and won many prestigious honours during his stay in the army including getting commissioned on the basis of securing 1st position in the Pakistan Military Academy as well as the Sword of Honour. He then took part in firing competition in London as part of Pakistan Army Firing Team. He also served as Instructor in the Pakistan Military Academy from 1976 to 1978.

Mr. Gandapur resigned from the army service in pursuit of better opportunities. Given his profile in the army, he was all set for a take-off position in terms of illustrious career in the armed forces which is a dream of any young entrant in the army. After resignation from his job in the army, he decided to pursue his education and got the following degrees: