People being cheated in name of dialogue with Taliban: Dr Tahir-ul-Qadri

Dr Muhammad Tahir-ul-Qadri, the leader of Pakistan Awami Tehreek, has said that talking of holding a dialogue with the militants is tantamount to hoodwinking the people of Pakistan. He said that choosing to talk with those who had been killing people, bombing cities and worship places indiscriminately meant that the government was surrendering before the terrorists. He said that he was not against the option of dialogue but dialogue with whom and on what agenda? He asked how could there be talks with those who rejected Pakistan’s Constitution and the writ of the state.

Dr Muhammad Tahir-ul-Qadri said that the proposed negotiation with the Taliban was beyond one’s comprehension, adding that the latter had claimed responsibility of many attacks. He said that Jundullah accepted responsibility of attack on Church in Peshawar while the Taliban dissociated themselves from it. He said that about 60 groups were working in the name of Taliban and the million-dollar question was who to hold dialogue with, on what terms of engagement and what would be guarantee of its sustainable success. Will one group accept the outcome of talks with the other faction? he asked.

Dr Qadri said that the All-Parties Conference only created confusion in the country. He asked the government to tell the people of Pakistan about identity of terrorists, their financers and backers and whose war against terrorism was it. He said that Article 19-A of the Constitution obligated the government to inform the people about all matters of national importance. He said that the Constitution was being disobeyed by not sharing the details of meeting between the Prime Minister, the Chief of Army Staff and Imran Khan. He said that the nation should be apprised about our role in war against terrorism and drone attacks, adding that the Parliament should be taken into confidence on this count. 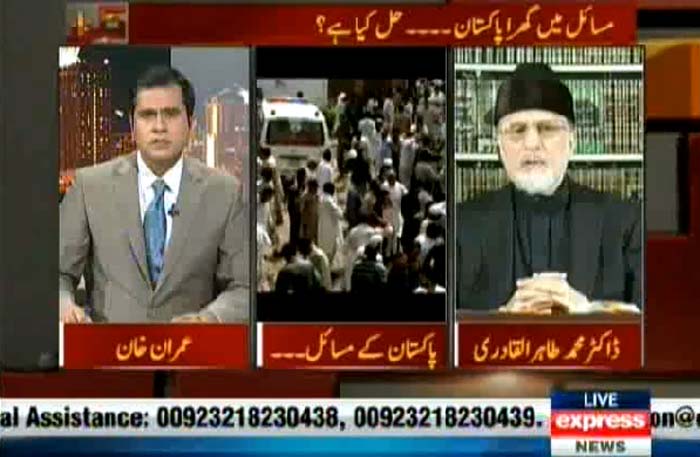 In reply to a question regarding Imran Khan’s statement of facilitating the opening of Taliban’s office, Dr Tahir-ul-Qadri said that if the Taliban accept the supremacy of the Constitution of Pakistan, they could be allowed to open an office. He said that Imran Khan’s compulsion was that his party had to run the government of KPK. He, however, added in the same breath that we would have think by rising above all compulsions and discarding all pressures. He said that the questions were left to be answered as to where money and arms for terrorists came from, which port was being used for this purpose, who were the recipients of weapons and funding, and whether the financers were the Muslim or non-Muslim countries. ‘Whether we are beggars, dumb and deaf that other countries humiliate us with abandon and choose to use our land for fighting proxy wars,” he asked.

Dr Muhammad Tahir-ul-Qadri said that those who demanded an end to drone attacks during the Musharraf era were in power now and were spared terrorist attacks during the elections. Now they wanted to pay back the favour done to them and want to complete 5 years in power themselves. He said that hundreds of people were losing their lives in target killing and merciless violence every day, adding that a government that cannot protect the life and property of its people did not have any right to stay in office. He said that the people would have to rise up for their rights. He said that the looters would never surrender these rights voluntarily unless people struggled for it.

Dr Qadri said that the genie of dearness got out of control in the first three months since the assumption of power by the present government. He said that prices used to stay stable in the past and there were no frequent changes. He said that if the present government stayed in office for 5 years, the country would be destroyed. He said that suicides were being committed on daily basis and people were so helpless economically that they were even compelled to sell the honour of their daughters to make their both ends meet, while the unemployed educated youths were committing robberies. He said that the youths needed employment opportunities not loans.

In reply to another question, Dr Tahir-ul-Qadri said that 20 million ‘Namazis’ were required for green revolution in the country with 10 million for struggle at the central level and 10 million at the regional level. He said that elections were the major hurdle in the way of democratic change, predicting that no change would come about under the present system.