Corruption, unemployment and price hike have hit new records in the country. Decisions are imposed on the people unilaterally by bypassing the Parliament. A plan has been worked out to whiten the black money collected from corrupt practices through a special waiver to an investment of Rs. 50 billion, which was envisaged to be 20.5 million rupees initially under the so-called special economic incentive package announced by the Prime Minister. This matter was not taken up before Parliament for discussion and approval. The prices of household items and eatables registered a phenomenal increase of 50% during the last six months. Power tariff has been set at Rs. 16 per unit, while the prices of other items have gone beyond the purchase capacity of common man. The government’s agenda is only corruption and welfare of 200 privileged families that continue to hold lever of power. The State Bank of Pakistan printed currency notes of worth Rs. 751 billion in 131 days, which comes to be roughly Rs. 5.75 billion per day and 239 million per hour. The nation is not aware of this fact. Inflation has increased manifold from 5.9 % a few months ago to reach 10.9% at the moment.

Pakistan Awami Tehreek leader Dr Muhammad Tahir-ul-Qadri expressed these views during his appearance on a TV programme on Saturday night. He appealed to the nation to stand up against this tyranny, elite capture of state resources, corruption and economic mismanagement. He said that the people would have to support him for revolution, strengthening of institutions and bright future of the youth. He said that the ruling elite resorted to massive rigging during elections, adding that when the Chairman NADRA started spilling beans and exposing this rigging, he was summarily removed from his position during the dead hour of night. The government tried to hush the matter under the carpet in this manner. 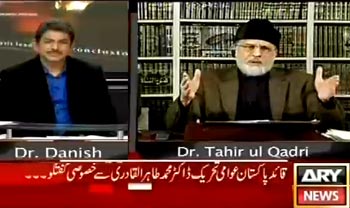 Dr Tahir-ul-Qadri said that the Prime Minister of Pakistan undertook 11 visits of various countries during last six months including a visit to Thailand. He said that since there was no official business to transact and a matter of public welfare to be discussed in Bangkok, the Prime Minister gave a finishing touch to a joint business agenda with his Thai counterpart. He said that price hike was breaking new records while the ruling elite was busy in merry-making. He said that all were keeping mum as there was no visibility of those known for taking suo motos and raising slogans of revolution. He said that revolution was the only answer to the rampant corruption, mismanagement, and bad governance, adding that he was even ready to lay down his life if revolution so warranted.

Addressing people from various walks of life including journalists, officials, traders, lawyers, labourers, farmers, men, women, and the youth, Dr Tahir-ul-Qadri said that the day of revolution was near and it was not time to sit on the fence, adding that they should join the caravan of revolution as it was a shared duty of all of us. He said that we had to save Pakistan founded by the Quaid-e-Azam Muhammad Ali Jinnah. He further said that this country was achieved after millions of sacrifices and it was our duty to save it now. He said that it was time to work for redemption of national honor and esteem. He said that we got to struggle for establishment of socio-economic justice in the country. He said that he knew personally that highly educated doctors and engineers were not able to get even a petty job. He said that these children of the poor households who were talented and got education due to immense sacrifices of their parents were asked to pay bribe for jobs.

In reply to another question, Dr Tahir-ul-Qadri said that he was waging a struggle to make Pakistan a peaceful, democratic, welfare Islamic state on the pattern of city-state of Madina founded by the Holy Prophet (peace be upon him). He said that he was endeavouring for restoration of rights of people, protection of their life, honour and property, giving their children a bright future and making this counter greater as envisaged by the founding fathers. He said that if vested interests took his life during the course of struggle, he was ready for it. He said that we would struggle to the finish peacefully and democratically. He made it categorically clear that none would be allowed to carry a weapon in his revolution, adding that his struggle would remain peaceful from start to the end. He said that not even a sparrow would be killed nor a glass broken. He said either he would return power to the people after success of revolution or people would bring his dead body back. He said that he was not afraid of death, adding that those who had indulged in all kinds of corruption and plunder of resources should be fearful of death. He said that if his blood was able to save the blood of the poor, it is a bargain worth going for.

Dr Muhammad Tahir-ul-Qadri said that he would lay down his life but would not bow before any one, adding that he who bows before Allah Almighty and is proud to be slave of his Prophet (peace be upon him) neither submits himself to anyone, nor fears anyone nor sells himself to anyone. Appealing to the nation again, he said that it was the work of entire nation of 180 million people to stand up and be counted. He said that revolution would not come about as a result of efforts of his person, his party and workers alone. He said that these were the people who brought about revolutions through combined efforts and sustained struggles.

Dr Qadri said that it was not time to grieve over the prevailing state of affairs and express one’s inability to turn the tide. He asked people to come out and launch a peaceful struggle for comprehensive change in the system. He said that people change the course of history through peaceful struggles, adding that we should take a leaf from their book.

Dr Tahir-ul-Qadri congratulated Chief of Army Staff General Raheel Sharif and Chairman Joint Chiefs of Staff Committee General Rashid Mahmood on assumption of their offices. He said that the armed forces of Pakistan were among the best and professionally committed and ideologically sound in the world. He said that the officers and jawans of the armed forces rendered sacrifices for the protection of the motherland and the nation was proud of their benefactors.