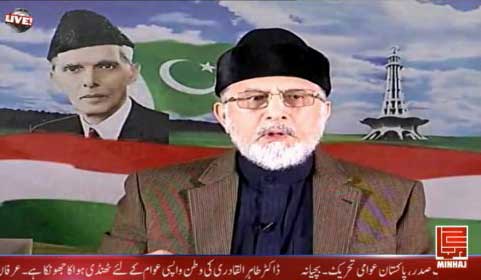 Dr Tahir-ul-Qadri expressed these views while addressing a crowded press conference in the central secretariat of PAT through a video link from Canada.

He said that the Pakistan military had always been a protector of the country at external and internal fronts. He said that he and every worker of Pakistan Awami Tehreek supported the armed forces for launching an operation for elimination of militancy and terrorism. He said that he considered the military operation against terrorism in North Waziristan as a great Jihad for the defence, security and stability of the motherland, adding that supporting his Jihad had become binding on the entire nation from Islamic point of view. He directed the PAT workers to establish ‘defence committees’ at the level of ward, village and union councils, and keep a strict watch over the activities of anti-peace and anti-social elements.

In reply to a question, Dr Tahir-ul-Qadri said that the way brazen and derogatory attacks against the armed forces and ISI were carried out by one private TV channel, the Federal Minister for Defence admitted them. Khawaja Asif is on record as having said that he witnessed the evidence of that channel’s involvement in anti-state activities and sent the summery to PEMRA after consultation with the Prime Minister.

Dr Qadri asked that when the Federal Minister for Defence had seen the evidence himself, why was no action taken against the channel and why was it not booked for being involved in anti-state activities? He further asked as to why the façade of 15-day suspension of the channel’s license and an imposition of Rs 10 million as fine was staged?

Dr Tahir-ul-Qadri asked the nation not to believe in propaganda being carried out ahead of his scheduled arrival on June 23. He said that his arrival was for the purpose of strengthening the people and further boosting the morale of the armed forces. He said that he was coming to Pakistan on June 23 to save the country and free the people from oppression. He asked the rulers to happily arrest or deport him in retaliation of the incident when General Pervez Musharraf had sent them back to Jeddah, adding that we were not wearing bangles. He said that he was a citizen of Pakistan and served this country throughout his life. He warned that if the rulers took any such step, the government would go home within a few hours, not months following the huge response and revolution would come about the same day.

In reply to another question, Dr Tahir-ul-Qadri said that the armed forces did a great favour on the nation by launching operation in North Waziristan, stating that the government of Pakistan did not take this decision. He said that had the government been sincere in eliminating terrorism, it would not have protected terrorists for full one year. He said that the entire nation was ridiculed in the name of talks, adding that those talks were against the practice of the holy Prophet (PBUH) and the Companions. He said that the government never allowed the people to get united against terrorism nor did they give free hand to the armed forces. He said that the military took this decision on its own for the defence, security and stability of the country and God willing, this operation would definitely be successful with the prayers of the people.

Dr Tahir-ul-Qadri said that the armed forces did not need any new religious decree or Fatwa. They had the Holy Prophet’s (PBUH) saying ordaining them to eliminate terrorists and militants like the peoples of ‘Aad’ and ‘Samood’. He said that if all religious parties got united and issued this decree, it would be great service to the state.