Not afraid of investigation into my assets, my conscience is clear: Dr Tahir-ul-Qadri

The fate of cruel rulers will become a point of reference in history as a result of people’s wrath. I cannot be unnerved by the government’s rumour-mongering mills and so-called investigative institutions. My destination is revolution only and there is no question of U-turn on this. The corrupt and oppressive government that came into being as a result rigging and malpractices will be sent home. Chaudhry Shujaat is a loyal friend and would continue to stand by me till revolution. There will be no bargain on the blood of the martyrs.

PAT chief Dr Muhammad Tahir-ul-Qadri expressed these views while speaking to people after laying floral wreath and lighting candles at the martyrs’ memorial in front of central secretariat in Model Town on Friday.

Dr Qadri said that National Accountability Bureau (NAB) and Federal Investigation Agency (FIA) had become handmaiden of rulers instead of being state institutions. He said that he could not be scared by any kind of investigation, adding that these agencies were free to conduct investigation into his assets the way they liked. He said that his conscience was clear. He said that the rulers had been known for asset accumulation the world over through corrupt practices, plunder of state resources and money laundering. He said that these people would be held accountable for each and every penny.

Dr Tahir-ul-Qadri said that he had been living in one-kanal house for last 30 years along with families of his two sons. He said that there was no way there could be any trade-off over the blood of the martyrs, adding that each drop of blood would be avenged. He said that people’s uprising would kick out Pakistan’s Hitler and Mussolini who had gone made, further saying that revolution would be followed by transfer of power to the masses. He said that overthrow of the government was a phase in the overall scheme of revolution and there would be no U-turn in this struggle.

Responding to purported misunderstandings in his press conference with Chaudhry brothers the other day, Dr Qadri quashed such rumours and expressed his regrets, adding that Chaudhry Shujaat was a loyal friend who was in close touch with political forces for All Parties Conference on June 29. 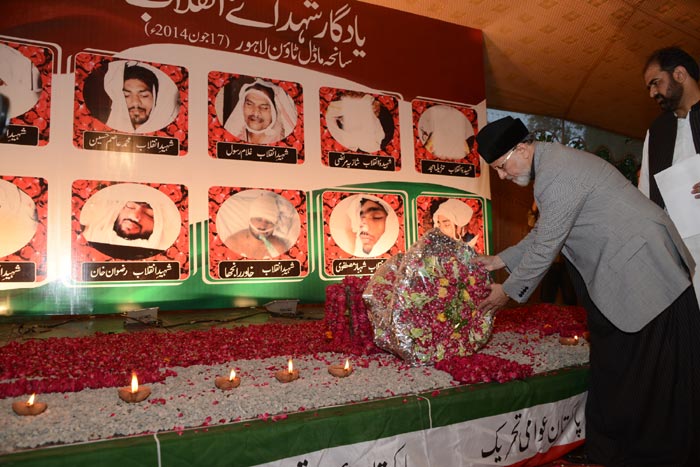