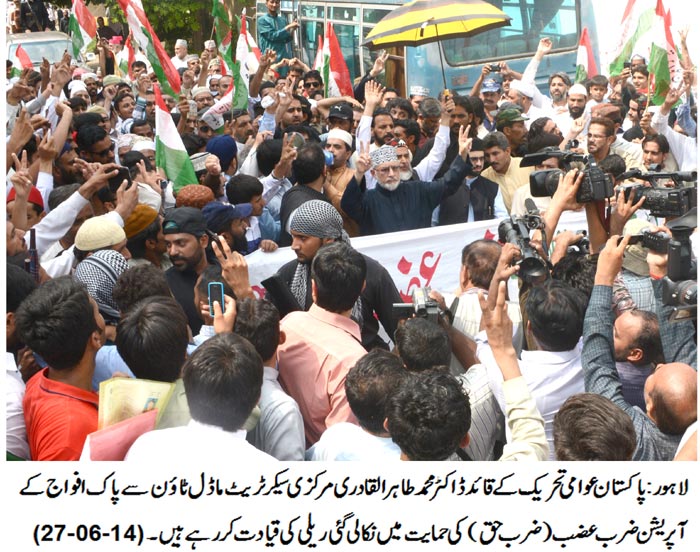 Countrywide rallies were taken out on Friday by PAT to express solidarity with the armed forces on the special instructions of Dr Muhammad Tahir-ul-Qadri. Thousands of people attended these rallies in over 60 cities. The PAT rally organized in Model was also attended by Dr Tahir-ul-Qadri. It started from Shalamar chowk and concluded at the Lahore Press Club. Muhammad Irshad Tahir, Qazi Faiz and Hafiz Ghulam Farid were among the prominent leaders of the rally.

Addressing the participants of the rally, Dr Tahir-ul-Qadri said that Operation Zarb-e-Azb was in fact Zarb-e-Haq and every child of Pakistan stood by their armed forces in this battle. He said that it was duty of every Pakistan to express solidarity with the armed forces. He said that the military was fighting a war for restoration of internal peace. He said that the government failed to eliminate terrorism and extremism in the country. He lauded the military’s decision to launch an operation against the terrorists, saying had it been left to the government, it would still have chosen to engage the terrorists in meaningless talks and thus provided them with space to re-arm and regroup themselves. He said that every worker of PAT was with their valiant forces in this fight.

Speaking to the participants in front of Lahore Press Club, PAT’s central Secretary Information Qazi Faiz-ul-Islam said that Dr Tahir-ul-Qadri was ambassador of peace and he was the first person to raise a voice against terrorism and extremism in the country. He said that he also took the initiative to express solidarity with the armed forces as they battled with the terrorists in restive North Waziristan. He said that every Pakistani stood with their armed forces in this war against terrorism.

Irshad Ahmad Tahir said in his speech that the situation demanded of every Pakistani to show their unstinted support to the armed forces. He said that PAT took out countrywide rallies in accordance with the announcement of PAT chief Dr Tahir-ul-Qadri. Hafiz Ghulam Farid said that the armed forces were pride of Pakistan and operation against terrorism was voice of every Pakistani’s heart. 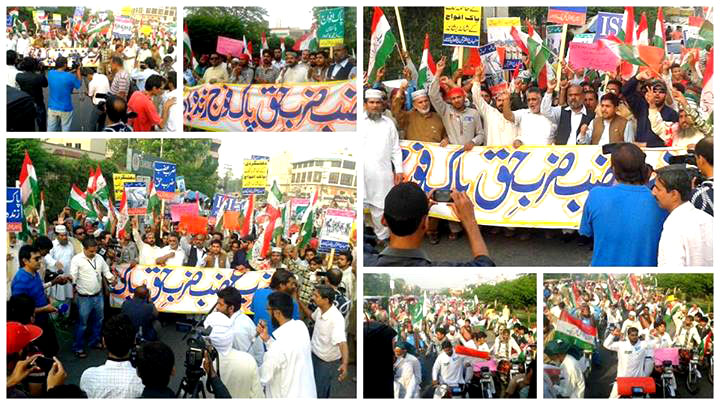 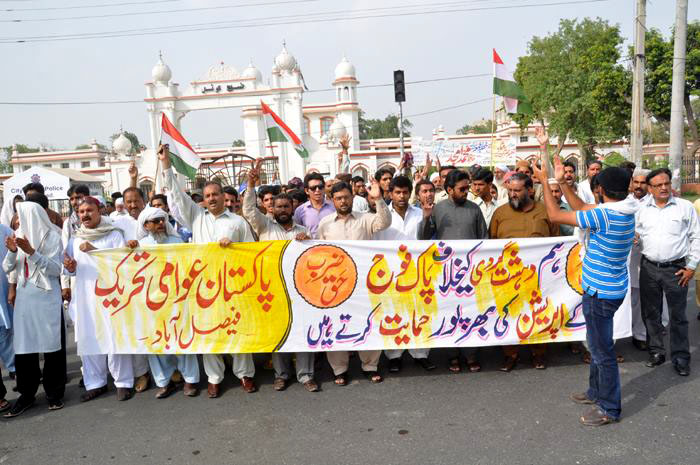 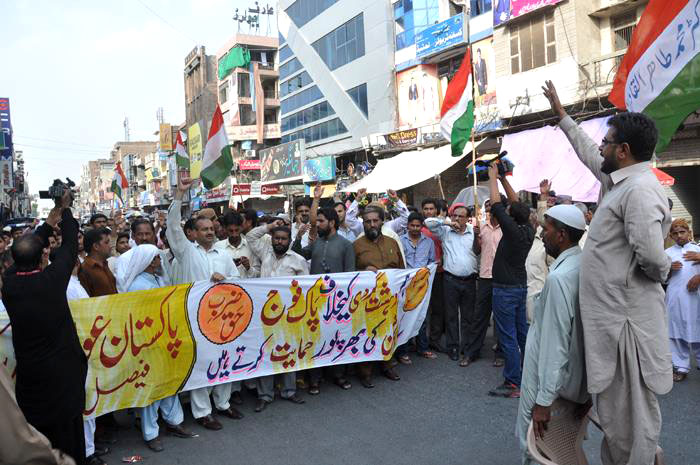 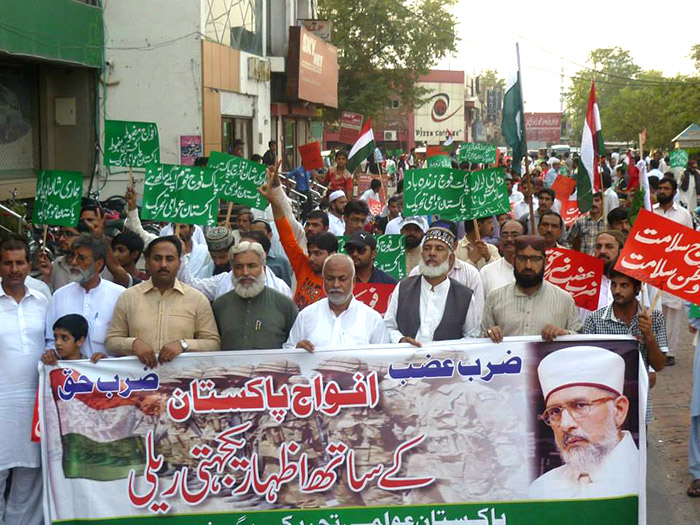 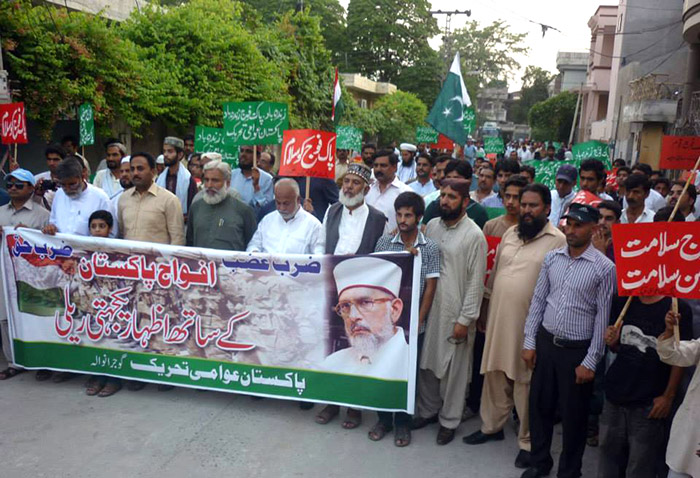 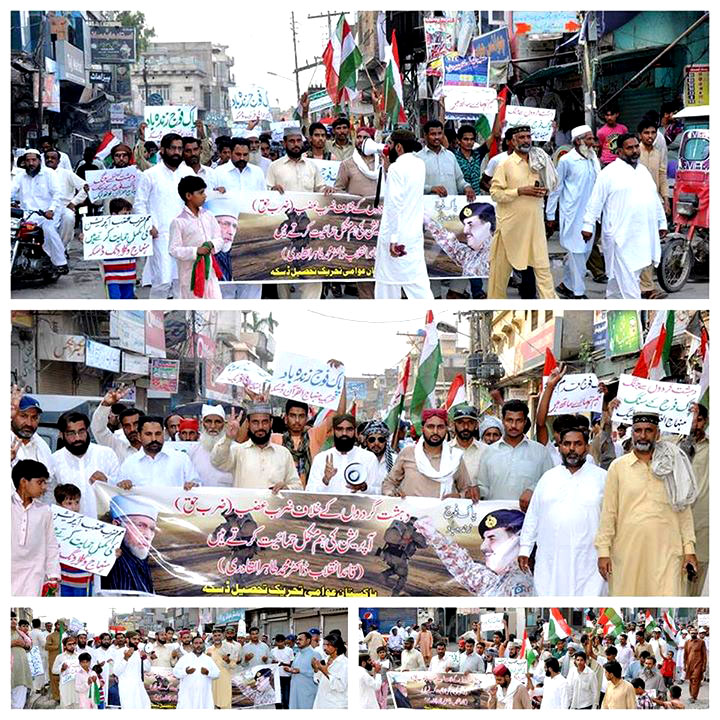