People to come out for revolution despite crackdown across Punjab: Dr Tahir-ul-Qadri

PAT chief Dr Muhammad Tahir-ul-Qadri has said that one of PAT workers from Bhakar, Abdul Majeed, died of bullet injuries he sustained when the district police shot at innocent and unarmed workers there. He said that Shahbaz Sharif was now responsible for martyrdom of 16 workers for which he would have to answer. He asked the nation to stand by one who would stand his ground for change in the system, whether it be Tahir-ul-Qadri or Imran Khan. He said that the rulers had turned Model Town into Gaza as all roads and approaches had been sealed off. He said that the people had come to Model Town for Quran Khawani to pay tributes to martyrs, adding that the people had been besieged inside the Model Town and supply of food, water and other edibles had been discontinued in a show of barbarism, and worst terrorism by the Punjab government. He said that when people went to nearby hotels and restaurants for food, police would arrest them.

Dr Tahir-ul-Qadri expressed these views while talking to media in front of his residence on August 08. Dr Raheeq Abbasi, Khurram Nawaz Gandapur, Bashrat Aziz Jaspal, Fayyaz Warraich, Farid-ud-Din Koreja, Qazi Faiz and others were also present on the occasion. He said that the Punjab police had lost all humanitarian values and stooped very low at the behest of the rulers. He said that the worst ever crackdown was being carried out on peaceful workers coming from across the country for Quran Khawani. He said that the Punjab government was a domestic terrorist, adding that the terrorist rulers were taking revenge on PAT for extending all-out support to operation Zarb-e-Azb and declaring the military operation as Zarb-e-Haq. He said that PAT garnered people’s support and created unity against terrorism at national level but the cruel rulers tore this unity into shreds by killing 14 unarmed civilians in Model Town on June 17.

Dr Qadri said that Nawaz Sharif and Shahbaz Sharif were playing the role of Israel in Pakistan and perpetrating barbarism on the people. He appealed to the civil society and people of Lahore of Lahore to provide food, water and other eatables to the people besieged in Model Town. He said that they were their brothers and sisters who were rendering huge sacrifices for the future and well-being of the nation. He said that it was also incumbent on the civil society to take part in this movement for change. He said that people here had been besieged like the people of Gaza and Palestine with virtually no access to water, food and eatables.

Dr Tahir-ul-Qadri revealed that the Chief Secretary Punjab had summoned the owner of private security company to his office whose security guards had been hired by PAT and ordered him to withdraw his security from their duty of security at PAT headquarters. He said that it was point to ponder for all segments of society that the Prime Minister and Chief Minister said that they had done so in the name of verification of credentials of these security agencies. He said that they should beware that their credentials would also be checked and it would be checked as to where their business empires were located. He said that they would be held answerable for each and every penny looted by them. They would have to answer as to which country invested money into the election campaign and brining them into power. He said that crackdown was underway across Punjab and hundreds of PAT workers and people had been rounded off. 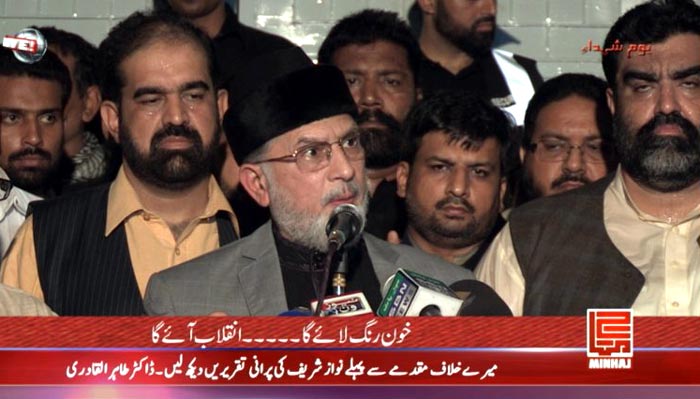