Dr Tahir-ul-Qadri presents his charter of demands before marchers 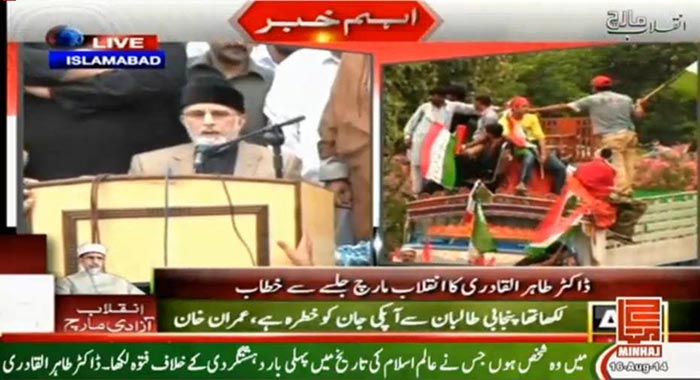 In his keynote address to the hundreds of thousands of participants of the revolution march at Khayaban-e-Suharwardi on August 16, PAT leader Dr Muhammad Tahir-ul-Qadri put forward his charter of demands and reforms. Before formally starting his speech, he made two important announcements. One, he said that an Additional District and Session Judge in Lahore ordered the registration of FIR against the 21 accused of Model Town incident including the Sharif brothers. He asked the police to implement the court order immediately, failing which police will be held responsible. He demanded that both Prime Minister Nawaz Sharif and Chief Minister Punjab Shahbaz Sharif should immediately step down from their offices and face the law over their role in the Model Town killings.

Secondly, Dr Qadri appealed to owners of nearby markets, food outlets and shops to open their markets for the participants, saying that they were their brothers and sisters who were waging a struggle for restoration of their rights. He assured them that the participants were peaceful people and he gave personal guarantee in this regard.

Dr Tahir-ul-Qadri made the following submissions and presented his set of demands in an emphatic tone.