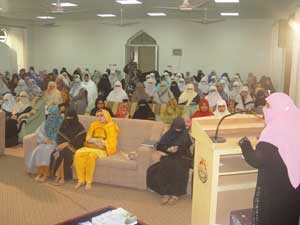 On 10th May 2007 the Minhaj ul Quran Women’s League, by the Grace of Allah Almighty and mercy of the Holy Prophet (PBUH) arranged a ‘Women Workers Convention’ which was held in the conference hall of the Central Secretariat of Minhaj-ul-Qur’an International, Lahore.

The main purpose of this event was to arrange a convention in order to congratulate all of the different ‘tanzimaat’ (Minahj-ul-Qur’an women league branches) through out Lahore, who have provided a great contribution during the blessed month of Rabi ul Awal. Alhumdulilah there are many branches of the women league throughout Lahore that are busily engaged in doing Dawah work; spreading the word of Islam, encouraging women to practice the Deen in their lives and to become more and more spiritually attached to the Holy Prophet (PBHU) through increasing their love for him and following his Sunnah. The convention was also an opportunity to brief the tanzimaat/branches about the new “Cassette Exchange System”. 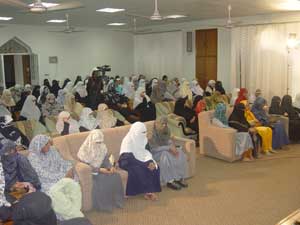 The senior students of the Minhaj College for Women were also invited since all of the students had exhibited great efforts during the International Mawlid Confrence which took place on the 12th Rabi Awal at Minar-e-Pakistan, Lahore and was attended by hundreds of thousands of brothers and sisters. The students were given a wide range of duties and were formed into different committees for the entire night.

Members of the Minhaj Naat Council were also invited to the convention in appreciation of their hard works during the month of Rabi Awaal. The sisters were also formed into small Nasheed groups and traveled all over the country attending the Mawlid programmes organized by various Minhaj-ul-Qur’an Women Leagues throughout Pakistan. They sang delightful Nasheeds with their melodious voices and always sent salutations upon the Holy Prophet (PBUH) in their unique styles. The Central Directorate of Women League was also specially invited to the convention as they too contributed greatly during the Mawlid programmes by giving charismatic speeches.

The convention began 3:00pm sharp with Rabia Urooj Malik (Student’s Convener) as being the host for the occasion. Verses from the Holy Qur’an were recited by Hafiza Abida Nasim. A beautiful nasheed was then sung by a famous nasheed artist of QTV, Shabina Majida. Introductory words were delivered by Mrs. Farah Naz (Central Nazima Women League). This was followed by a melodious missionary song “HUM INQALAAB ZAADIYAN” sung by Shabina Majida and Aaliya Liaqat. Shields and awards were then distributed to the Tanzimaat. 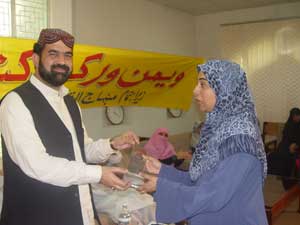 Minhaj-ul-Qur’an Women League of Iqbal Town, Lahore was awarded a shield based upon their achievements of targets set by the Markhaz (headquarters) and also received another shield for a great increase in their membership.

Minhaj-ul-Qur’an Women League, Samanabad Town, Lahore were awarded shields for organizing hundreds of Halaqa-e-Durood in their areas. This is where local women are organized into small groups that meet either weekly or fortnightly and read Darood and Salaam upon the Holy Prophet (PBUH). These are indeed very spiritual gatherings where the women who attend are encouraged to leave behind their worldly affairs for a short period and just concentrate upon reconnecting their link with Allah Almighty and His Holy Prophet (PBUH). 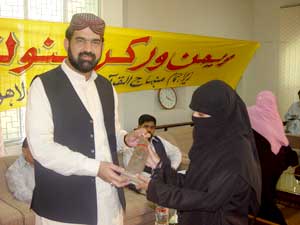 Minhaj-ul-Qur’an Women League, Aziz Bhatti Town also received a shield for holding the most successful Halaqa Irfaan-ul-Qur’an. These Halaqah’s are where again women gather together on a weekly or fortnightly basis and listen to and then study the translation and tafseer of the Holy Qur’an based upon the translation given by Shaykh-ul-Islam, Dr. Tahir-ul-Qadri called Irfaan-ul-Qur’an.

Mubashira Ghulam Qadir was awarded the “Best worker of Lahore” for her efforts throughout the year. 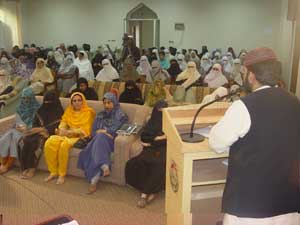 After the distribution of shields Dr. Raheeq Ahmad Abbassi (Nazim e A’la) briefed the audience on the new “cassette exchange system”. In that briefing he focused on the new systematic way to launch the CD Systems.

At the end of convention leaflets of the forthcoming Islamic learning courses and CD exchange system were distributed among the tanzimaat.

The Convention was ended by a collective Du’a.

May Allah Almighty give us more guidance and spiritual enforcement to do much for this Great True Mission. Amin Bajah-e-Sayyad-il-Mursaleen (sallala ho Alaihe wassalam).