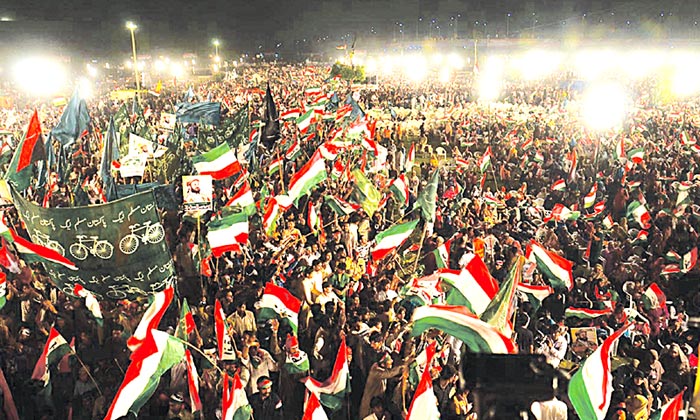 He urged people to vote PAT to power so that it could implement its agenda and warned that the country would be ruined if the government was not removed.

Reiterating his demand for accountability and reforms before midterm elections under a national government within constitutional bounds, Mr Qadri said his party would not leave the field open (for rivals) if elections were “imposed” without reforms and would field candidates in every constituency.

He again made an appeal for votes and funds for the cause of revolution.

He called upon people to become revolutionaries and knock down the current system which had brought them nothing but miseries and said his revolutionary movement and sit-in would be spread to every nook and corner of the country.

Spelling out his 10-point agenda, the PAT leader said devolution of power to the union council level would be introduced under the plan.

People urged to vote for PAT to implement its programme

The agenda included provision of essential commodities to the poor at half the prices, free healthcare and education up to the matric level, economic empowerment of women, removing disparity among salaries of different pay scales, purging the country of sectarianism, distribution of government land among landless farmers, electricity supply to small towns, shelter for the homeless, reduction by half the utility bills of people earning less than Rs15,000 per month and doing away with tax on utility bills of the poor.

He said new federating units would be created at the divisional level.

He said PAT would not accept blood money for the victims of the Model Town incident and would only agree to “retribution through courts”.

He alleged that by outsourcing different contracts to foreign firms the government was running the country on the pattern of the East India Company and said that if not removed, it would outsource the entire country.

He said different political philosophies and isms had been tried in the country but they all had failed to deliver and now “Quaid-i-Azamism” would be introduced.

Referring to the strategic location of Pakistan, he said the country could serve as a transit route for trade among different economic zones.

Earlier, a charged crowd received Dr Qadri when he, under strict security measures, reached the venue of the public meeting, which reverberated with the slogans of “Go Nawaz go” and “Go Nizam (system) go”.

PML-Q leader Chaudhry Pervaiz Elahi was conspicuous by his absence from the rally, giving credence to reports that the Chuadhrys of Gujrat were unhappy with Dr Qadri reportedly for holding secret talks with the government.

PAT is said to be ready to call off its Islamabad sit-in if Punjab Chief Minister Shahbaz Sharif goes on leave till completion of investigation into the Model Town tragedy.

However, Dr Qadri spoke to Chaudhry Shujaat Hussain on phone and persuaded him to participate in the rally. The latter denied that they had any difference with the PAT chief.