Daily Times: Qadri spells out ‘revolutionary agenda’ to pull Pakistan out of crises 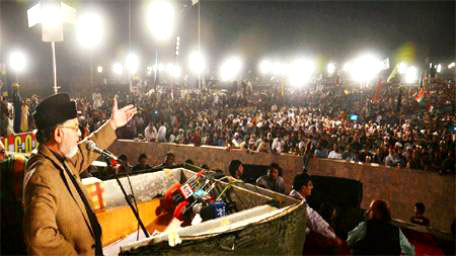 LAHORE: Pakistan Awami Tehreek (PAT) chief Tahir-ul-Qadri gave his election manifesto and campaigning slogan “No Asia without Pakistan” on Sunday and announced that he will end load shedding and provide electricity to every village within next three years after coming in power.

He announced to divide Punjab into seven to nine provinces under his devolution plan in which independence and authorities would be directly given to the districts, teshils and union councils, which will establish their own assemblies. Addressing a huge rally at Minar-e-Pakistan on Sunday, Qadri said that he would provide food, clothes, residence, free education, tax-free bills of electricity, gas and water to every poor according to the vision of Quaid-e-Azam.

He asked the people to get the PAT membership so that his “revolution” could come to power after the next general elections that could be held in next three months or within next year. He said that Pakistan is linked with four great economic regional zones comprising China, India, Iran and Central Asia, and the country could earn a lot of money in inter-transit facilities for mutual trade. But he said “we must end corruption, and law and order situation should be improve first, and secondly, Pakistan could make money through gas and tourism, and thirdly, Pakistan could use its status of a big consumer society”.

Qadri promised the nation that he would end extremism in the country and make Pakistan a part of G7, G20 and other great economic forums of the world after his “revolution”. He said the sitting government is working on only nine electricity projects of 5,094MW which would be completed in 2017, so load shedding would not end. The cleric said that after coming to power, he would produce electricity from 12 different methods inclding solar, windmills and micro hydro project of 25MW. He said that 90 million people in the country are illiterate and poor while unemployment ratio is more than that in many small countries. The rally passed a “condemnation resolution” against the government “for threatening media and closing a private TV channel”.