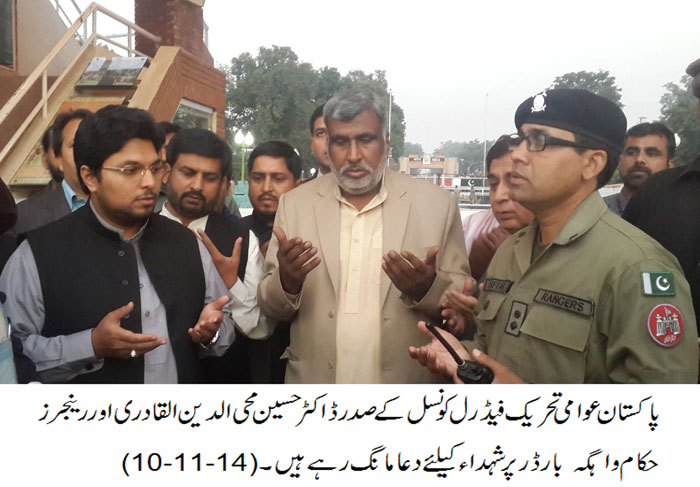 President of PAT Federal Council, Dr Hussain Mohi-ud-Din Qadri, visited Wagha border on Monday along with senior leaders of the party and condoled the martyrdom of Ranger officials with the Ranger authorities. He offered Fateha for the departed souls and appreciated the bravery, sense of duty and commitment of the Ranger officials who sacrificed their lives in the line of duty. PAT Secretary General Khurram Nawaz Gandapur, Qazi Faiz-ul-Islam, Hafiz Ghulam Farid, Muhammad Ishaq, Rashid Chaudhry, Sajid Bhatti, Rana Nadeem, Raja Zahid Mahmood, and Shoiab Tahir were also present on the occasion.

Dr Hussain Mohi-ud-Din Qadri demanded of the government to establish a hospital in memory of the martyrs of Wagha tragedy so that the local population could benefit from the modern medical facilities. He said that the Punjab government was given prior information regarding possibility of a terrorist attack but it failed to take steps for security of the people and tragedy happened that took a heavy toll on dozens of innocent people. He said that the financial assistance announced by the Punjab government has not yet been delivered to the heirs of martyrs. He demanded an immediate release of aid money to the bereaved families.

Dr Hussain Mohi-ud-Din Qadri said that he was hopeful that the report of JIT constituted for the purpose of investigating the Wagha border tragedy will be made public and those involved in this cowardly attack will be apprehended and brought to the book. He said that the people rejected the agenda of terrorists by passionately attending the flag lowering ceremony on the next day after the act of terrorism, adding that the nation made it clear that a handful of terrorists could not be allowed impose their agenda on the basis of gun.

The President of PAT Federal Council said that sacrifices rendered collectively by the armed forces, Rangers, ISI, Police and law enforcement agencies in fight against terrorism remain unparalleled the world over and no other military has given these many sacrifices during state of peace. He said that neither did we submit to terrorists yesterday nor will we do it today or tomorrow, adding that victory is surely destiny of people, peace and truth. He said that Zarb-e-Azb has broken the back of terrorists and now they will not get any place to hide themselves. He said that we paid glowing tributes to the officers and jawans of Pakistan army taking part in Operation Zarb-e-Azb who have given enormous sacrifices for our peaceful sleep. He prayed to Allah Almighty to protect the officers and jawans of the armed forces who are fighting for peaceful future of the country.

Dr Hussain Mohi-ud-Din Qadri said that Dr Tahir-ul-Qadri is the only political leader of the country who did not merely make statements against terrorism, adding that he issued a comprehensive 500-page Fatwa against terrorism and suicide bombing in the light of Quran and Sunna. He said that no such scholarly, reference-based and argumentative work was ever produced in the history before.

He said that it has become necessary in the wake of recent incidents of terrorism that provincial governments particularly the government of Punjab review their security plan. He said that the Chief of Army Staff had made it clear at the time of launch of Operation Zarb-e-Azb that all state institutions and governments would have to cooperate for success of military operation. He demanded of the Punjab government to arrest the terrorists involved in the suicide attack near Wagha border and bring them to justice. He said that entire chain of terrorism will have to be traced and dismantled including their patrons and financial supporters. He also underlined the need of making prosecution effective and fool-proof to ensure conviction of terrorists in the courts of law.