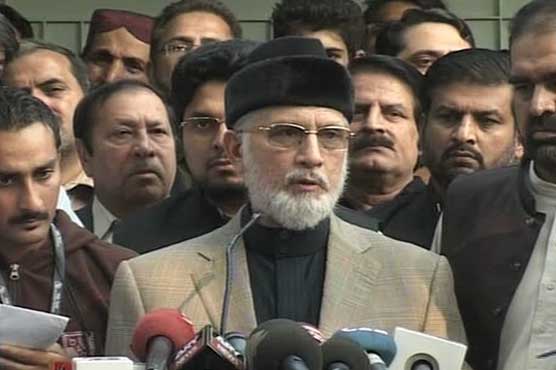 The JIT is formed by the same people who were involved in the Model Town incident: says Qadri

LAHORE: Pakistan Awami Tehreek (PAT) chief Dr Tahir ul Qadri on Thursday has said that the Joint Investigation Team (JIT) formed to probe the Model Town incident is of no use as it is giving ‘clean slate’ to the criminals involved in the incident.

He expressed these views while talking to the media at the Allama Iqbal International Airport Lahore.

Dr Qadri said that ‘some people’ are being sent abroad, fearing that they might become approvers in the investigation.

PAT chief also said that the Prime Minister (PM) and the Chief Minister (CM) have pressurised Principal Secretary to the CM, Dr Tauqir Shah to become ambassador to Geneva.

He said that the formation of the JIT headed by the Capital City Police Officer (CCPO) Quetta is murder of justice.

He also said that the assurances given by the government to him during the talks were all fake.

PAT chief also dismissed rumours about rift between Pakistan Tehreek-e-Insaf (PTI) chairman Imran Khan and PAT. He said that he has no differences with Khan.

He also said that PAT president Raheeq Abbasi received a call from senior vice chairman of PTI Shah Mehmood Qureshi who welcomed him to Pakistan.

Dr Qadri said that he has decided to demonstrate protests against the government by holding sit-ins in other parts of the country.

He further said the JIT is formed by the same people who were involved in the Model Town incident.