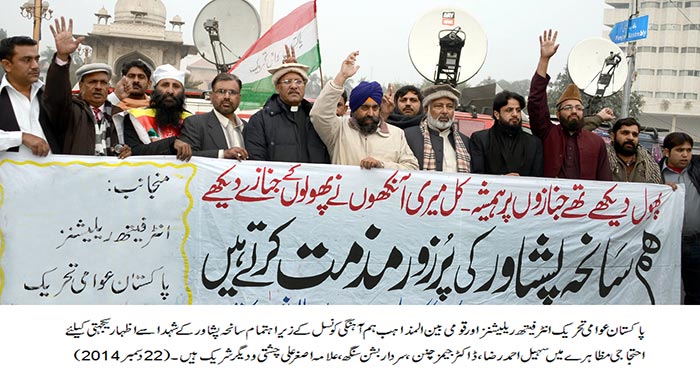 A protest demonstration was held against Peshawar tragedy and terrorism under the banner of Interfaith Relations PAT and National Interfaith Harmony Council at the Mall Road Lahore. In addition to people belonging to Muslim community, a large number of the non-Muslim citizens participated in the demonstration. PAT leader Sohail Ahmad Raza, Christian leader Dr James Chanan and Youel Bhatti, Sikh leader Sardar Bishin Singh, Pir SA Jafari, Allama Asghar Ali Chishti, Prof Liaqat Zia and others were the key participants of the demonstration.

Speaking on the occasion, Sohail Ahmad Raza said that the Peshawar tragedy has saddened the whole nation. He said that the terrorists have perpetrated the most heinous crime by targeting innocent schoolchildren. He said that this heart-rending incident has united the whole nation against anti-Pakistan, anti-Islam and anti-humanity enemies. He said that the terrorists have attacked the heart of the nation by attacking innocent children. He said that countrywide rallies against Peshawar tragedy will continue to be held under the banner of PAT, adding that the 14-point anti-terror strategy presented by Dr Tahir-ul-Qadri has the potential to rid the country of menace of terrorism, militancy and extremism provided it is implemented in letter and spirit.

Christian leader Dr James Chanan said that terrorists have no religion. He said that the whole Christian community condemns terrorism in the strongest possible words and joins the nation to mourn the killing of 148 children and staff members of Army Public School in Peshawar. He said that in order to eliminate terrorism from the country, historic Fatwa against terrorism and suicide bombing given by Dr Tahir-ul-Qadri should be made part of educational syllabus. He said that the path-breaking Fatwa of Dr Qadri was the dire need of the hour to crush terrorists. He said that Dr Qadri is such a leader of the Muslim world who has categorically and comprehensively exposed the terrorists and furnished intellectual guidance to the nation. He underlined the need of translation of Dr Qadri’s Fatwa in different languages of the world so that followers of other faiths could also know about real and peaceful face of Islam. He said that the Christian community living in Pakistan has decided to hold simple ceremonies of Christmas and New Year in view of national tragedy of Peshawar.

Sikh leader Sardar Bishin Singh said that the whole Sikh community stands by Pakistan army and the Pakistani nation. He said that armed forces are the guarantor of national security. He said that the Peshawar tragedy has sunk the nation into intense grief and sorrow. He demanded all those involved in heinous crimes and terrorism should be brought to justice.