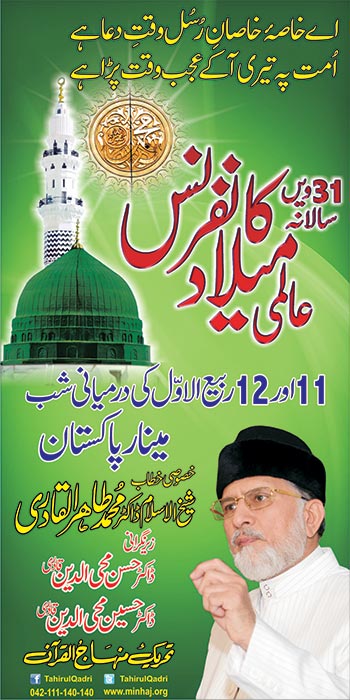 Minhaj-ul-Quran International will celebrate Mawlid-un-Nabi (SAW) with a resolve to promote international peace, love, harmony and brotherhood. Celebrating the birth anniversary of the Holy Prophet (SAW) is duty of every faithful. There is no happiness greater than the birth of the beloved Prophet (SAW). MQI is playing its role in fulfillment of its duty. The occasion of Mawlid-un-Nabi (SAW) will be celebrated with full festivity this year. A prestigious Mawlid-un-Nabi Conference (SAW) will be held at the historic Minar-e-Pakistan during the intervening night of 11th and 12th of Rabi-ul-Awal. Renowned religious scholars, Qaris and Naat Khawan from across the Muslim world will attend the conference. Dr Muhammad Tahir-ul-Qadri, patron-in-chief of MQI, will deliver his keynote address at the occasion.

Dr Raheeq Abbasi said that the Holy Prophet (SAW) is the prophet of mercy and peace for the whole mankind. He said that Islam, being a religion of peace, does not allow taking of anyone’s life. It is a religion that equates the killing of one person with the killing of entire humanity.

A squad of 5000 members consisting of PAT Youth Wing and MSM will be deployed for security duties on the occasion of conference. The proceedings of the mega event will be covered live around the world through Minhaj.tv and various national TV networks. The hundreds of thousands of people will attend the Conference from the Lahore city only. Milad Marches will be held in all the major cities of the country with a view to creating awareness about the blessed month of Rabi-ul-Awal. The purpose of these marches is to invite people to participate in the Milad festivities. People are also being persuaded to light candles on the roofs of their homes as a mark of celebration.

The central MQI leaders have started mass contact campaign in all the four provinces particularly the province of Punjab. The visits of Lahore, Sheikhupura, Faisalabad, Jhang, Toba Tek Singh, Sargodha, Khushab, Mianwali and Bhakkar are being carried out in the first phase. The cities to be visited in the second phase include Muridkay, Kamonki, Gujranwala, Wazirabad, Gujrat, Jhelum, Lalamusa, Srai Alamgir, Gujar Khan, Rawalpindi and Islamabad. Sahiwal, Multan, Bahawalpur and DG Khan Divisions will be covered in the third phase of mass contact campaign. Separate seating arrangements will be made for men and women. Besides this, reception camps will be set up across the Lahore city to welcome and guide the caravans coming from various parts of the country.

Dr Raheeq Abbasi said that Milad feast will be arranged on the night of Mawlid-un-Nabi Conference (SAW) like the practice of the past years where food for all and sundry will be available aplenty. He said that the proceedings of the programme will be shown around the world via internet. He said that lamp-bearing Milad processions are being taken out starting from the 1st of the holy month to the 12th of Rabi-ul-Awal in various big and small cities of the country and special lectures of the Holy Quran are being arranged. He said that special prayers are being made for peace, and security in the country, for martyrs of Peshawar tragedy and elimination of terrorism. He said that the gift of Durood Sharif in number of billions recited at Gosh-a-Durood of MQI and from around the world will be presented to the court of the Holy Prophet (SAW) on the occasion.

The head of Milad Committee said that people associated with MQI will exchange gifts, Milad cards and bouquets during this holy month. In addition to cleaning up their neighbourhood, they will wear clean clothes and wear badges of ‘Nalain-e-Pak’ on their chests. He said that Durood sharif will be presented in the house of every worker staring from dawn of 12th of Rabi-ul-Awal. Residences, buildings and shops will be decorated befittingly and the world will be given a message that the Pakistanis are moderate and peace-loving people and the handful of terrorists will not be allowed to hurt peace of the country and bring a bad name to religion and Pakistan.