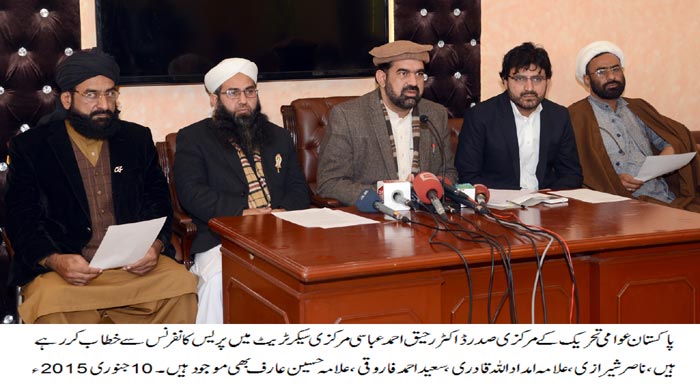 LAHORE: [10-Jan-2015] The president of Pakistan Awami Tehreek Dr. Raheeq Ahmed Abbasi has said that terrorism cannot be controlled in the manner dengue has been controlled and the Punjab government instead of bringing an ordinance should have bought a bill in the Punjab Assembly for this purpose.

Talking to media alongwith other allies here on Saturday Dr. Raheeq said that those madrassa which are not involved in terrorism should not be afraid of inspection and neither will we allow them to flourish and implement their brand of Islam and neither will we allow the Punjab Government to play the role of a double agent. He said the need of the hour is that Zarb-e-Azb should be started against political parties in the same manner as it is underway in the tribal areas against terrorists. He said the government will have to eliminate those terrorists who are hiding among their ranks and not act in the way as it has in the past by promoting Tauqeer Shah to grade 22 and appointing him as an ambassador in WTO, instead of holding him responsible for the killing of 14 innocent persons in the Model Town incident.

He said we will inform the WTO in writing about the achievements of Tauqeer Shah and his role in the massacre in Model Town. He said in the next few days PAT will announce its new strategy in regard to the Model Town incident.

Speaking to the press they said that those madrassas aiding terrorism should be dealt with an iron hand and exemplary punishment should be awarded to them. They were of the view that by getting photographs taken with those who support suicide attacks the Punjab Government has given the impression that it is the political wing of these terrorist outfits.

Dr. Raheeq said that had the government fulfilled its duties under Article 25 of the constitution and provided free education to our children than our children would never have gone for education to unregistered madrassas and studied unapproved syllabus. He demanded that the government immediately register all the madrassas and those who do not get themselves registered should not be allowed to operate and function. He said if the government cannot give protection to the people of the country than it should leave the power corridors and let someone else rule. He said that strict action should be taken against those who provide false information. He said action is necessary against those who are funding these madrassas and it the government fails to do this than all these actions against terrorists will go down the drain.

He said that on the 12th all the schools will be reopening and it is the duty of the government to protect each and every child and it is a sorry state of affair as the government is not doing this as it is short of funds but on the other hand a 31 billion tax programme has been started and billions have been approved in advance for the Rawalpindi Metro Bus project. The government has all its priorities mixed up and is wasting its resources at the wrong places. He said in 1970, 1979 and 2001 joint boards were formed and they approved a syllabus but even today the government has failed to get that syllabus implemented. The government must change its attitude otherwise all measures being taken to eliminate terrorism will be wasted.