We send curse on deal. This propaganda has died its own death. No meeting with Imran Khan or any of PTI leaders was held in Madina. There is a need of carrying out massive operation in Karachi. All major political parties provide patronage to target killers who are used to crush their political opponents. There is no place of extremism in Islam. Al-Qaeda has been succeeded by Taliban and now Islamic State which directly beheads their captives. This is an international mischief. Such a courageous leadership is needed as has global vision, knowledge, capability and honesty. These things are not available with the present rulers who are patrons of terrorists. Only an honest leadership can look the world leaders in the eye and call a spade a spade.

These views were expressed by PAT chief Dr Muhammad Tahir-ul-Qadri during his special talk with ARY News on February 03. He said that the only quality of the present rulers is to make money and wallow in wealth. He said that Pakistan needs a leadership that has the courage to say ‘No’ to the big powers in his country’s supreme national interest. He said that the rulers who rained bullets in Model Town for 12 hours on end are patrons and supporters of terrorists and they even do not have the courage to get a fair and impartial inquiry conducted into the Model Town incident. He said that if the rulers are not planners and killers of innocent people in Model Town, why are they not releasing the report of Justice Baqar Najfi? He stated categorically that as long as the present rulers stay imposed, terrorism would not end and they are hatching a conspiracy to thwart the military courts.

Dr Tahir-ul-Qadri said that critical questions remain to be answered, adding that the rulers know the answers well enough as to who gives arms and ammunition to terrorists and resources. He said that weapons do not grow from the soil like wheat and there should surely be a network for their supply. He said that the rulers are not interested in meting out exemplary punishments to terrorists. He said that to say that the western world is opposed to capital punishments is a weak argument asking whether executions do not take place in China, Russia, and Saudi Arabia but why does anyone not raise their objections there? He said that a ban remained in place on hangings for a long time and thousands of people lost their lives during that time asking as to who is responsible for these martyrdoms?

Dr Qadri said that the situation represents a test case for the military whether it faces these conspiracies with steadfastness or gets into silence. He said that if terrorism does not end even now, then there is no ray of hope for the country anymore. He said that PAT workers alone cannot bring about revolution, adding that they rendered sacrifices, staged sit-in and revolution march but the people sat idle at their homes waiting for some miracle to happen. He said that the status quo would not change and people will continue to suffer oppression and injustice unless they take to streets for their rights. He said that God does not change the fate of those who do not do anything to change their own fate. 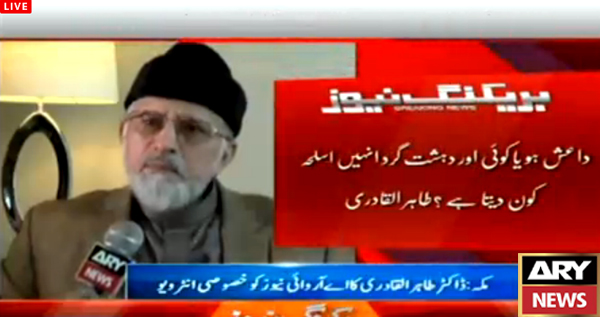