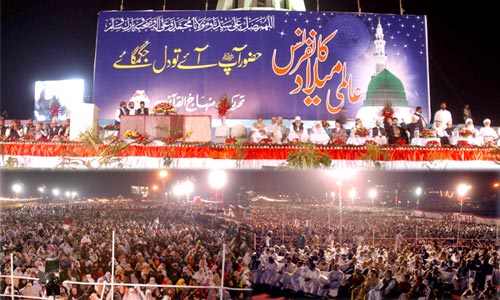 Minhaj-ul-Quran International Held the 23rd Mawlid Conference on the 11th of Rabi-ul-Awwal at Iqbal Stadium Minar-e-Pakistan. The programme started at 8'o clock but the people from all the corners of the country and abroad had already arrived before evening prayer. They say, a major part of the space arranged for the people has already been filled till 7'o clock. Besides that thousands of caravan from four provinces of the country have been arriving to celebrate the birth of their beloved and dearest Prophet (SAW) in a magnificent and novel way. Their enthusiasm display how much love they enjoy for Him. 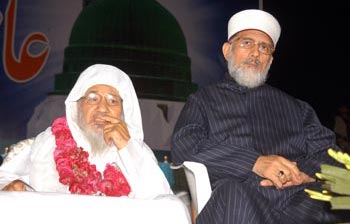 Minhaj-ul-Quran International arranged a big feast for the devotees. 12 hundred goats had been cooked for them. The people were served with delicious biryani till 9:00 PM everyone was being treated and showered unfathomable respect as they were the guest of the Holy Prophet (SAW). They have made special separate arrangements for women. Their happiness knows no bounds and they were in the state of ecstasy. Matchless and sound arrangements of security were made to avoid any accidents.

The World Mawlid Conference started at 9:00 PM with the recitation of verses from the Holy Quran. After the recitation of the Holy Quran, veteran and world famous Nashid Artists continued reading Naats and driving the people into the state of Madina. The people felt as if they were sitting before the holy Grave of the Holy Prophet (SAW). Nashid artists were trying to resurrect the time when the Holy Prophet (SAW) used to sit on the cot and asked Hazrat Hassan Bin Sabit (RA) to read naat. 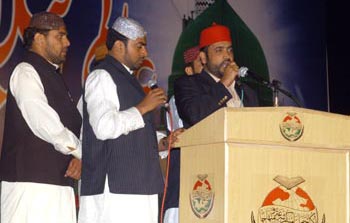 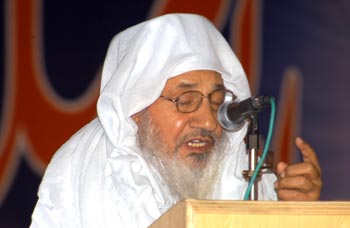 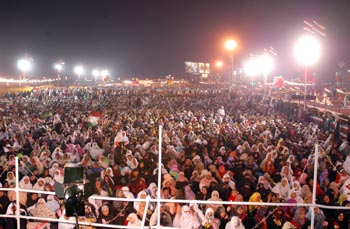 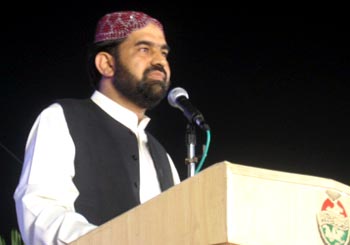 Dr Raheeq Ahmad Abbasi, Nazim-e-Aala Minhaj-ul-Quran International, shed light on the services rendered by Shaykh-ul-Islam for the Muslims world specially his achievements and undertakings in religion. He also told the audience that the members of Minhaj-ul-Quran recited Durood Sharif 1 Arab, 13 Karore, 59 Lak, 29 thousand six hundred and 75 times in a short span of time of mere 15 months. The people who came to Gosha-e-Durood also kept fast through out the year during their stay at Gosha-a-Durood. 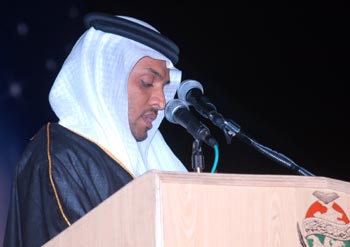 Al-Shaykh Rashid bin Muhammad Almazrai who came from UAE to see the enthusiasm and fondness of Pakistani people, said in his speech, we celebrate his birth because he brought complete message in the form of Holy Quran. He helped us to come out of darkness and ignorance. He said Islam is the religion of peace. Today is the birth of beloved of Allah Almighty who was the champion of peace and practiced peace and glorified it to the bloom. He said it is matter of great pleasure for me to participate in the world largest Mawlid Conference. He said it was worth seeing scene to see the people expressing their love.

Agha Murtza poya, central leader of Pakistan Awami Tehreek, said in his speech that three things had been rather obligatory for every Muslim. Firstly obedience to Allah, Obedience to the Holy Prophet (SAW) and enjoying cemented love, respect and reverence for the family of the holy Prophet (SAW). He said that Minhaj-ul-Quran International is promoting to the end these three obligations. He also said that its destination is to revive the system of Madina which the Holy Prophet (SAW) gave and implemented in the state of Madina. 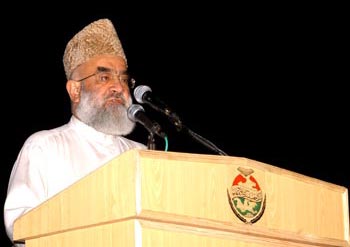 Senator, Allama Abas Kamaili said that when the whole Ummah was going through hard times and facing hundred of stumbling blocks like terrorism, fundamentalism and extremism, the only way to tackle the situation is to reestablish and strengthen the broken relation with the Holy Prophet (SAW). He said that Minhaj-ul-Quran International is promoting the love of the Holy Prophet (SAW) through out the world. He says that Minhaj-ul-Quran International is exclusively doing wonderful job holding such Mawlid conferences throughout the Holy month of Rabi-ul-Awwal. 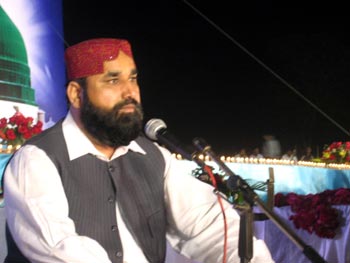 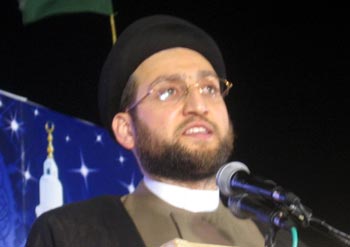 Then Al-Shaykh Ammar-ul-Hakim Al-Iraqi expressed his views. In his address he says that Minhaj-ul-Quran International and its Founder, Skaykh-ul-Islam Dr Muhammad Tahir-ul-Qadri has made and promoted the event of international interest. He said it was the need of time to promote that holy event through out the world. MQI has set a role model for the whole world to celebrate the birth of the Holy Prophet (SAW). 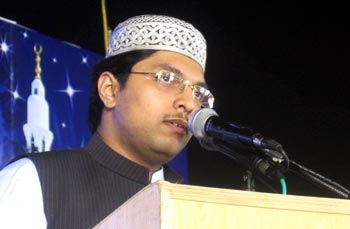 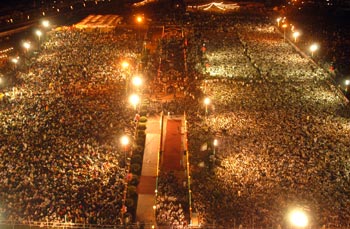 Sahabzada Hussain Mohy-ud-Din Qadri delivered a speech in English. He said that Minhaj-ul-Quran International is the only movement that is promoting peace, harmony and tolerance round the globe. He said that the claims of the other movements and international powers were mere claims and hollow in nature. He invited the men round the globe to study the history of Minhaj-ul-Quran International and know the wonders of the movement. He said that he was happy to tell that during the almost twenty three years of life, the movement has never created chaos and disorder in any part of the world. he says not a single mishap is registered in glorious canons of Minhaj-ul-Quran. 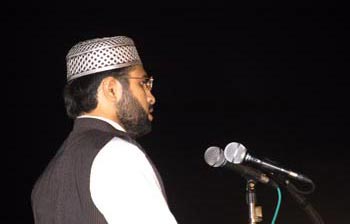 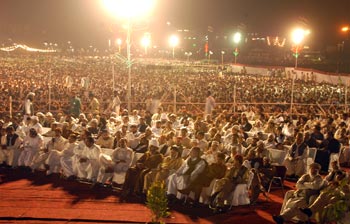 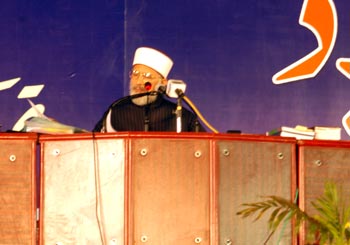 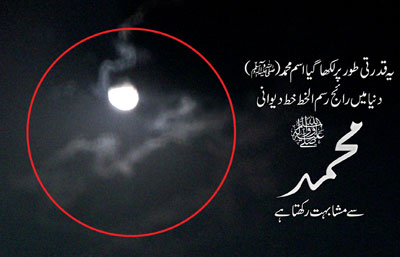 He drew the attention of the people towards that beautiful phenomenon, when he indicated every eye was fixed to the sky and enjoying the beautiful and worth looking scene. They satiated the thirst of their eyes with that miracle. This miracle doubled the faith and love of the people attending the conference.

The scene was captured with the help of camera and the people round the globe viewed it at TV. He ended his speech at 5 early in the morning.

Shaykh-ul-Islam's talk came to an end at the blessed time, the time of the birth of the pride of all creation. At that moment the sky was decorated with fireworks and balloons, and the hearts of millions of people were decorated with the love of the Holy Prophet (SAW) as Minhaj Naat Council recited Durood and salaam. Shaykh-ul-Islam urged the people not to miss the Morning Prayer. Shaykh-ul-Islam and other guests prayed for perfect faith and prayed to Almighty Allah to bless the participants of the celebration of Mawlid-un-Nabi. As Shaykh-ul-Islam left the stage, hundreds of people rushed towards the Badshahi Mosque to perform their morning prayer and fulfil the promise they had made to Shaykh-ul-Islam.

After his speech, Minhaj Naat Council, Muhammad Afzal Noshahi and many other Nashid Artists recited Durood-o-Salam in their melodious and rich voice. All the people attending the Conference joined them and reciting altogether. The whole Lahore was echoing with the lyrics. 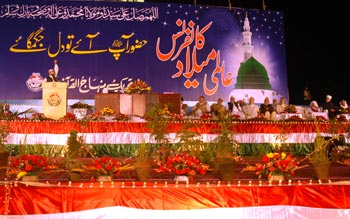 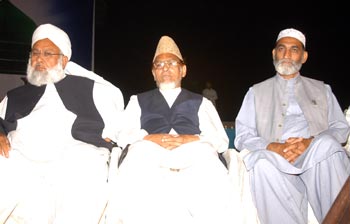 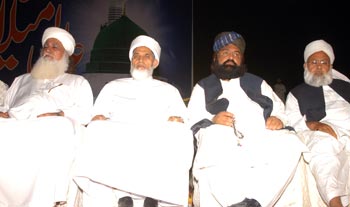 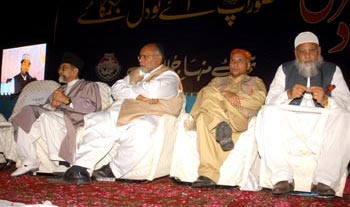 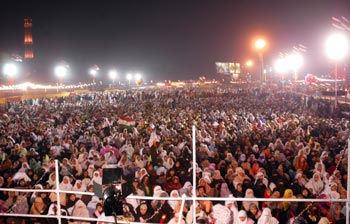 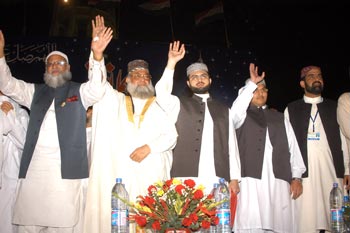 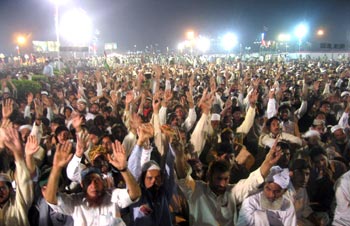