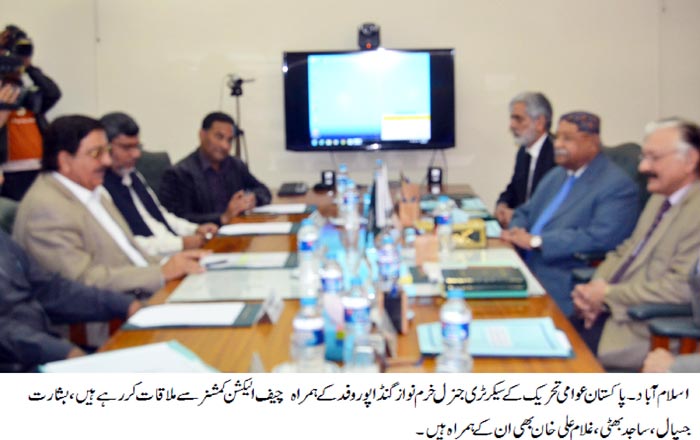 Islamabad: [26-03-15] The secretary of Pakistan Awami Tehreek Khurram Nawaz Gandapur led a delegation and met the Chief Election Commissioner Sardar Raza Khan and gave him a briefing on the suggestions of the PAT Chairman Dr. Tahir-ul-Qadri for an independent election commission.

The delegation also briefed the CEC on the election rally held by the Railways Minister in the Walton area of Lahore Cantonment and demanded action against the minister for violating the constitution. Punjab PAT president Basharat Jaspal , Umar Riaz Abbasi and Sajid Bhatti were also part of the PAT delegation.

The PAT delegation gave the following suggestion to the CEC for consideration:

The delegation told the CEC that PAT will participate in all the elections and also in Gilgit-Baltistan. They requested that either a Tractor, Motorcycle or Flag be given as an election symbol.

The CEC assured the PAT delegation that all their suggestions will be given due consideration and the complaint against the Railways minister will be dealt according to the law. He asked the PAT delegation to continue to assist the EC and keep sending in suggestions for the improvement in the working of the EC. He said the EC will consider any suggestion that is received from any political party of the country.