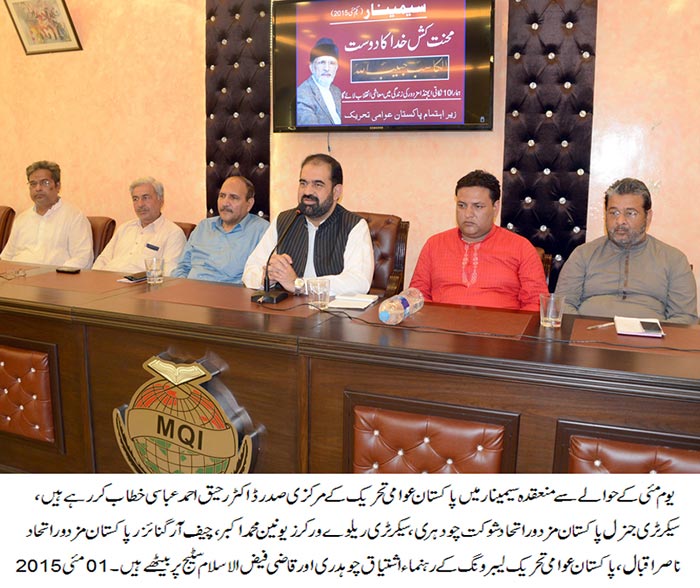 Addressing a seminar held at the PAT central secretariat in connection International Labour Day, PAT President Dr Raheeq Ahmad Abbasi has said that those who came into power on the vote bank of the labourers are busy in filling the banks with national wealth. He said that those entrusted with the task of formulating policies for the workers are their biggest enemy. The ten-point agenda of Dr Tahir-ul-Qadri will bring about economic revolution in the lives of the labourers and the poorest of the poor, he added.

Fateh khawani was done for twenty labourers in Turbat on April 11 who were killed in cold blood by the terrorists. The participants also condemned the killing of two labourers of brick kiln for demanding their wages. They asked the government to apprehend the killers involved in these heinous crimes and mete out exemplary punishment to them.

Addressing the ceremony, Qazi Faiz-ul-Islam said that unequal and exploitative system of capitalism has shackled the whole economic system. He said that the Holy Prophet (SAW) termed the worker as his friend 1400 years ago, adding that those who commit enmity with him are the worst people.

Chief Organizer Pakistan Mazdoor Mahaz Nasir Iqbal said on the occasion that 65% of our population is associated with the profession of labour but Parliament protects the interests of 35% of people through legislation. He said that even if all the businessmen and kings of the world are no more, the global system will continue to work. He said that Dr Tahir-ul-Qadri is the voice and hope of the working and labour class and all those who were killed in Model town on June 17 all belonged to the working class.

PAT leader Ch. Ishtiaq Advocate said that a few dozens of billionaire families have kept 65% of working population hostage. He said that labourers and workers have the passion to render the sacrifice of their lives for their rights today like the labourers of Chicago.

The seminar adopted a resolution which asked the government to do away with anti-labour laws and restore the inspection system in factories by labour inspectors and all regulations that have inhibited the functioning of labour unions directly or indirectly should be withdrawn. The wages of a labourer should be made equivalent to monetary value of one gram gold. If the rulers cannot do so, they should at least reduce price hike by half. The rulers and all wealthy people having their assets abroad were asked to bring their money back and invest it here so that people get employment here.