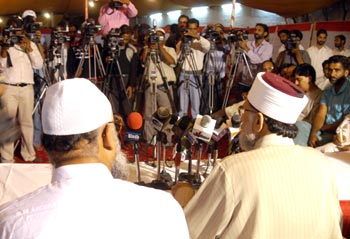 It is wonderful to be here, it is very pleasant or more than that, it is fabulous, says Habib-ul-Allah, A Mutakif from Karachi. We have been coming here for the last 17 years; it was the time when the first phase of Minhaj-ul-Quran Mosque was under its construction. It was the first collective I'tikaf when we had water in our camps due to heavy rains in the season. He says, it had been good to dry the camps with our own hands. We were almost one thousand Mutakifeen in the company of Shaykh-ul-Islam. We came when there were no amazing facilities as we have got today by the great blessings of Allah Almighty. Words are not sufficed to say about the I'tikaf experience at Minhaj, He says. I am 67 years old now and I was of 50 when I came here first time in my life for I'tikaf. I have not been blessed with off-spring after many years of my married life. I joined in hands with Minhaj-ul-Quran, came here for I'tikaf, prayed to Allah Almighty for off-spring and he answered my supplications in the form of cute son in the very next year. Since then I am coming to thank Allah for his marvelous blessings he showered upon me. 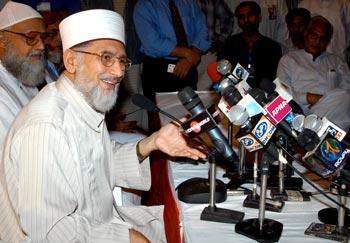 When he was talking about his experience, a vast majority of people have gathered to listen around him and at the door and outside of the blocks he sits for I'tikaf.

After Zuhr prayer, regular classes in circles, Hafiz Saeed Raza Baghdadi taught Mutakifeen the proper accent and phonetics of the Holy Quran. The number of students in his class is increasing day by day. After Asr prayer, Mufti Abdul Qayyum Hazaravi entertained the questions regarding Islamic Jurisprudence and modern Approaches towards them.

Shaykh-ul-Islam arrived for Ifta at 5:30. Before his arrival a large number of well known national and International journalists have occupied their seats. After a formal greetings, Shaykh-ul-Islam welcomed all of them .Tariq Ismail sagar, a senior journalist and Khadim Hussain Chaudary, famous columnist had been sitting at his right and left. After evening prayer, Shaykh-ul-Islam spoke to the press, told them that the number of Mutakifeen is increasing with every passing year, and it is expected that in 2009 the number will touch the figure of 65 thousands as it is going to be double every year. He says, in future it would be very difficult to manage the things for so many people. But Insha Allah, they would manage. 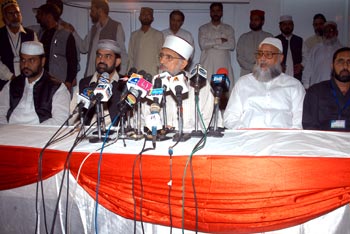 He told the press, that the Mutakifeen occupy half of the Minhaj University ground adjacent to Minhaj University, Lahore and Minhaj-ul-Quran Mosque. As the big gathering at the exalted night of the 27th of Ramadhan is always held in that ground, so now we face shortage of space this year. He also told the press that there had been only 45 or 50 people in his first speech he delivered at 204 Shadman in 1980. Now the number of people in his lectures is going beyond one hundred thousands. He told when in 1989, the Government stopped telecasting his lectures on the understanding of the Holy Quran and he was kept away from Television for almost fifteen to sixteen years. As a result, a whole generation had been kept away from his thoughts. Now they are listening to me at Q TV and the youngsters who had come to their ages during this period are here with me for I'tikaf. He told the press that 75 % of Mutakifeen are youngsters and that is a very healthy thing to note that our young generation has got love, strong feeling and passion for Islam. They only need the right guide. 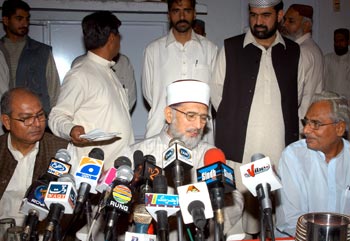 He says, the number of Mutakifieen from overseas is also astonishingly increasing. The Mutakifin have come from India, Bangla Desh, Iran, Bulkh, Bokhara and Harrat. He says; now he does not visit these countries for speeches, but his students and scholars of Minhaj University go on visits to these counties and the number of people in their lectures also goes beyond hundreds of thousands. He says it is all the great blessings of Allah Almighty and the Faiz of Aqa (SAW).

In his briefing and question-answer session he told the press, that Islam and its values are at stake and its enemies are striking it from every side. On one hand, they are trying to pollute its ideology and on the other hands they are labeling the true Muslims as terrorists, extremists and fundamentalists. He says, the GOVT is playing with lives of innocent people on the decree of their foreign lords. He says, now the war against terrorism has become a big joke. He says, the Muslims Ummah should stand united and shun off all the miner differences existing among them. He says, Minhaj-ul-Quran International is against all sort of terrorism, fundamentalism and rigidity and eagers to maintain peace and harmony in the world. But our methods are different, we do not use force against force, we address the root causes of these evils like injustice, poverty and illiteracy. We can not win the war against terror until we do not come to the real issues. Terrorism would definitely increase, if we just use force and not address the root causes.

At the end of press briefing, Shaykh-ul-Islam also told them that they intended to celebrate the birth of the Holy Prophet (SAW) in four big cities of Pakistan because last year a vast majority of people had to return home without attending the impressive gathering because there was no space even to stand at Minar-e-Paksitan and its surroundings. At the end, He shook his hand with them and asked Nazim-e-Aala and Shahid Mehmood to see them off.