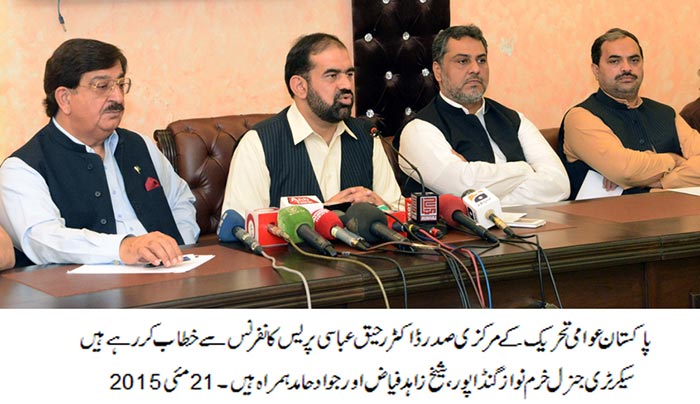 Announcing the countrywide protests against the report of the Joint Investigation Team (JIT) established by the government, PAT President Dr Raheeq Abbasi has said that our apprehensions and fears have turned out to be correct that justice will not be delivered as long as the present rulers are in power. He said that the JIT gave a safe passage to the killers instead of helping the cause of justice for the oppressed. He said that we would contact and present our case before every forum of justice including diplomats, international human rights organizations, and the European Union.

The PAT President made these remarks while addressing a heavily crowded press conference at the central secretariat of the party on May 21. PAT Secretary General Khurram Nawaz Gandapur, Sheikh Zahid Fayyaz, Jawad Hamid, Sohail Raza and others were present on the occasion.

Presenting his demands, Dr Raheeq Abbasi said that (1) the government should constitute a neutral JIT in accordance with the commitment it gave during the sit-in. This JIT should not have any representation of the Punjab police. (2) The Model Town case should be transferred to the military court and its trial should be held there. (3) The report of Justice Baqar Najfi-led judicial tribunal should be made public. (4) The fake cases registered against thousands of our workers should be placed before a neutral JIT for their review and evaluation.

Dr Abbasi said that the Prime Minister, Chief Minister, federal ministers nominated in the FIR, and Rana Sanaullah are planners of the Model Town tragedy, adding that threats of grave consequences hurled by Khawaja Saad Rafique and Rana Sanaullah are on record. It is pertinent to mention here that the clippings of threats given by both PML-n leaders were shown during the press conference. He said that lies have been spoken with abandon in the report and the facts have been distorted. He said that the JIT submitted a report which was prepared in accordance with the script. He said that we have shown enough patience, adding that we are left with no option but to take to the streets against the government. He said that our protests will get underway from tomorrow.

Dr Abbasi said that all TV channels covered and aired the moment to moment developments in the Model Town on that unfortunate day and despite this, a baseless allegation was raised that three thousand PAT workers were present and firing was started by us. He said that the lie of two-way firing was also spoken brazenly. He said that all TV channels have footage of the incident and they can show in any single footage whether any of our workers was holding a weapon in his hand or he might have fired. He said that Rana Sanaullah submitted an affidavit to the first JIT in which he admitted that he presided over a meeting on June 16, 2014 held in connection with removal of encroachment. He asked how the present JIT can say that the relationship of Rana Sanaullah with the incident was not proven. He said that the Chief Minister stated in his affidavit that he ordered the police to stand down at 9 am through his secretary Dr Toquir Shah. The fact remains that all people were martyred after 11 am. He asked how it was concluded in the report that the Chief Minister had no relation with the incident whatsoever.

Dr Raheeq Abbasi said that it was the responsibility of the JIT to tell as to who was controlling the Lahore police on June 17. He said that the JIT has mentioned that DIG (Operations) Rana Abdul Jabbar reached the spot at 9 am, asking how an SP by the name of Salman Ali could order police to fire in the presence of DIG (Operations). He said that Salman Ali has not gone anywhere, further stating that he is in the protection of the Chief Minister. He said that he would also be sent abroad like Dr Toquir or might have already been sent outside the country. He said that neither will Salman Ali appear nor will the case taken to its logical conclusion. He said that the way Model Town tragedy was carefully conceived, planned and executed in an organized and calibrated way, likewise, the JIT report was also prepared in advance. He said that lies have been woven into every line and every word of the report, adding that the JIT was set up to give a clean chit to the killers.

The PAT President thanked the Opposition leader Mian Mahmood-ur-Rashid and other opposition members for raising their voice against the concocted and fraudulent report in the Punjab Assembly. He further stated that it was on the intervention of the Army Chief during the sit-in that the FIR was registered. He said that our demand that the Model Town case should be heard by the military court is not unconstitutional by any means. He said that this country’s Parliament expressed its lack of confidence in the anti-terrorism courts and described the need of establishing military courts as inevitable. He said that the military is leading the war against terrorism and the Model Town tragedy is also the worst example of terrorism. He said that the government should have no problem if the case is transferred to the military court.

Dr Raheeq Abbasi said that following Model Town massacre, the Chief Minister had stated in his press conference that if the judicial commission even raised a finger towards him, he would tender his resignation, adding that it has been eight months since he had been sitting on the report. He said that we would protest peacefully for justice but the protest demonstrations will be countrywide for which comprehensive schedule will be issued soon. He said that the PAT has written a letter to the Inspector General of Police regarding injustice, vindictive actions and oppression being committed on the PAT workers and has demanded the constitution of a neutral JIT to review fake cases registered against workers.

Dr Abbasi informed the media men that the Central Working Council of PAT has decided to hold countrywide protests against the fake report of the JIT, adding that a committee in this regard has been constituted. He said that we would take to streets in every city against this oppression, massacre and brutality. He said that we are now convinced that the present rulers only understand the language of protests.

Khurram Nawaz Gandapur said on the occasion that if the government trusts the military and considers it a neutral and impartial institution of the country, then the trail of Model Town case should be held in the military court.