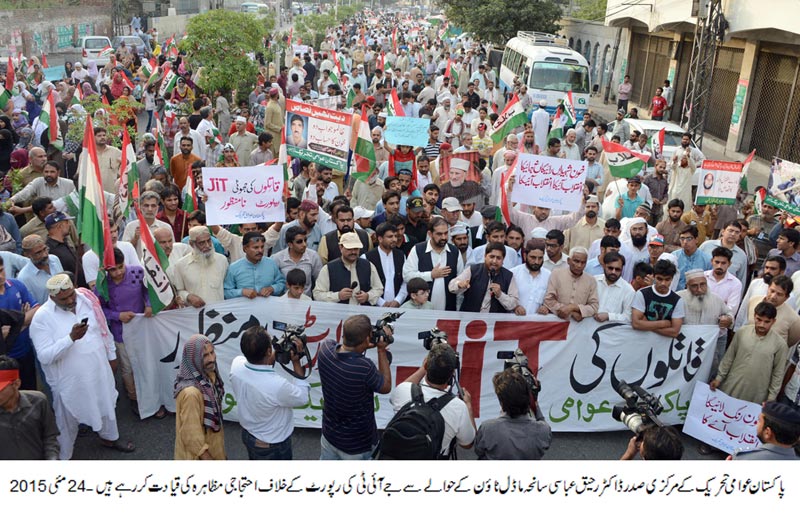 Addressing the participants of the protest demonstration outside Lahore Press Club here today, PAT President Dr Raheeq Ahmad Abbasi said that we would go to any length for justice and if the institutions do not dispense justice, we will hold the killers accountable ourselves. He said that the members of the Joint Investigation Team prepared the report against their conscience just to please their political masters, adding that we give a damn to them and will bring them to book as well as the time arrives. 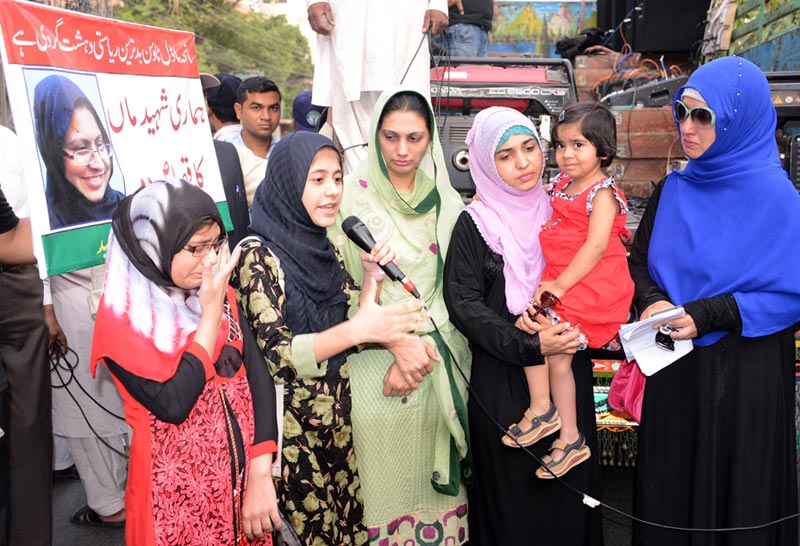 Thousands of workers attended the demonstration held under the banner of Pakistan Awami Tehreek outside the Press Club against the fake and highly questionable investigation report of the JIT. Other PAT leaders such as Jawad Hamid, Mazhar Alvi, Ayesha Shabbir, Hafiz Ghulam Farid, Ishtiaq Chaudhry and Asif Mir also addressed the demonstration. The participants chanted passionate slogans during the demonstration. They said that if they cannot get justice, they should be handed down death.

Addressing the demonstration, Bisma, the daughter of Shaheed Tanzeela Amjad, asked the rulers as to what her mother and aunt had done that they became deserving of their bullets. She stated emphatically that it is justice she is seeking for her Shaheed mother and Shaheed aunt. She said that if the people did not come out against oppression and brutality, they would also continue to be deprived of their mothers. Her address to the demonstration brought tears in the eyes of the participants.

Dr Raheeq Abbasi said that we would not rest till we send the Chief Minister Punjab, Rana Sanaullah, Inspector General Police, Rana Abdul Jabbar and other accomplices to gallows in accordance with the law of the land. He said that PAT rejects the report of the Joint Investigation Team and demands the transfer of the Model Town case to the military court. He stated that the JIT issued the investigation report, which was prepared in Patyala House under the very supervision of Rana Sanaullah. He said that the members of the JIT performed an unholy act of pushing the issue of spilling of the innocents’ blood under the carpet and thus they crossed every limit in terms of lack of consciousness and morality.

The participants of the demonstration marched from the Lahore Press Club to the Muslim League House at Davis Road and staged a symbolic sit-in there. A large number of women belonging to PAT Women Wing attended the demonstration. Ayesha Mubasher, Atia Baynain, Ayesha Qadri, Gulshan Irshad, Sadia Chaudhry, Anam Riaz were among the distinguished women leaders attending the demonstration.

Addressing the participants of the demonstration, Khurram Nawaz Gandapur said that Model Town tragedy was the result of a pre-planned strategy. He said that PAT chief Dr Tahir-ul-Qadri was punished for raising his voice against the government’s oppression, usurpation of rights, violation of the Constitution, and fake electoral system in the name of removal of barriers. He said that the proceedings of the JIT are of no consequence and worthy of condemnation. He said that the report has exonerated the killers of their crimes but the court of masses has put their seal of approval on them. He said that the ruling PML-N stands isolated on the issue of the Model Town tragedy.

PAT Sialkot chapter took out a massive protest demonstration against the JIT report which was led by senior leader Sheikh Zahid Fayyaz, Rashid Bajwa and district leaders. Addressing the demonstration on the occasion, Sheikh Zahid Fayyaz said that the court of the masses has given its verdict against the killers and declared them guilty of Model Town massacre. He said that it is due to rejection of its stance at the popular level that the PML-N leaders cannot face the people. He said that the head of the JIT showed lack of spine and acted against his conscience when he tried to push the issue of Model Town killings under the carpet. He said that those who have tried their level best to give a clean chit to the killers of innocent people and murdered justice will not be able to escape the wrath of Allah.

Yet another protest demonstration was held in Gujrat today, which was led by Allama Farhat Hussain Shah, and Haji Akram. In addition to the district office holders of the party, a large number of workers and people of the area attended the protest. Addressing the participants, Allama Fahrat Hussain Shah said that the blood of martyrs and the oppressed would not go waste. He said that the rulers tried to get a clean chit from the JIT composed of personal servants but they have got exposed in the process. He said that our struggle will continue till we get 100% justice.

The hundreds of workers congregated in front of the Sahiwal Press Club today to protest the fake JIT report. Dr Tanvir Azam Sandhu and Qari Mazhar Farid led the demonstration. Speaking to the participants, Dr Tanvir Azam Sandhu said that the blood of the innocent people was shed like water in Model Town. He said that going by the events of the day on June 17 last year, it appeared as if the Indian security forces were carrying out an assault on the held Kashmir. He said that we have one point agenda now, adding whether you give us justice or death. 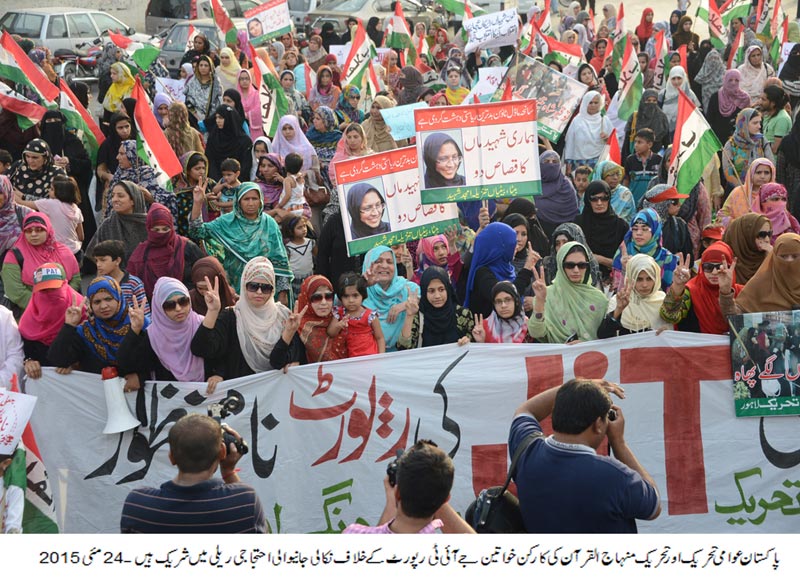 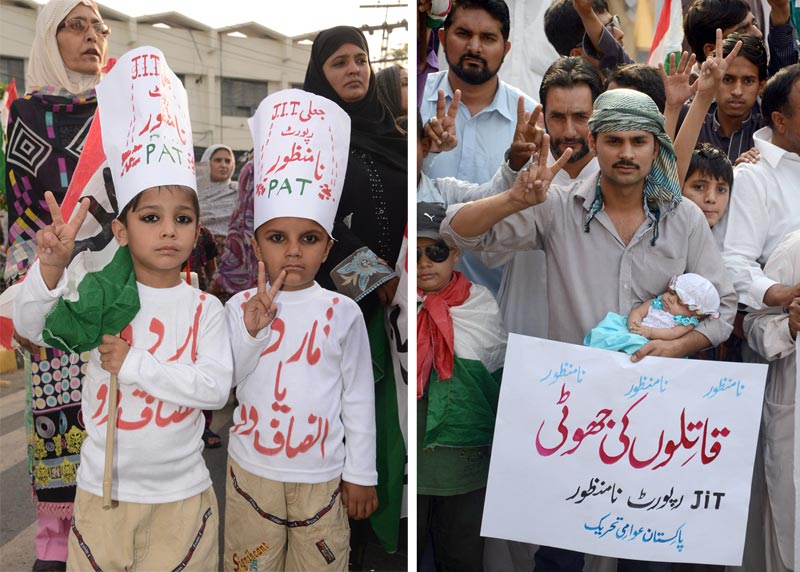