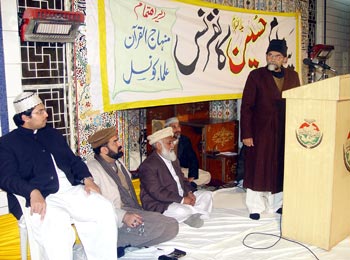 The proceedings of the conference started with the recitation from the Holy Quran by Qari Allah Bakhsh Naqshbandi at 8 p.m. at night followed by Naat and Manqabat recited by Muhammad Afzal Noshahi and Minhaj Naat Council. Sayed Ali Ghazanfer Krarvi, Aitullah Agha Zaidi, Allama Hafiz Muhammad Ashraf Chaudhry and Mufti Abdul Qayyum Khan Hazzarvi spoke at the occasion on the subject of martyrdom of Hazrat Imam e Hussain (AS). Afterwards Shaykh-ul-Islam Dr Muhammad Tahir-ul-Qadri started his telephonic speech from Canada at 12 a.m.

He chose the following verse as his theme in connection with discussion on the martyrdom of Hazrat Imam e Hussain (R.A.). Its translation is: 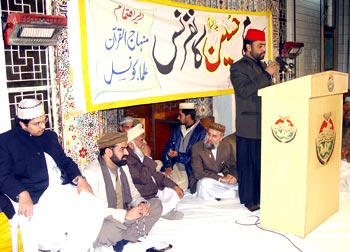 "Allah and His angels send blessings on the Prophet: O ye that believe! Send ye blessings on him, and salute him with all respect." (56:33 al-Ahzab)

Quoting Hadith at the occasion, he said that for six months onwards since the revelation of this verse, the holy Prophet (SAW) would pass by the house of Hazrat Fatima (AS) and call out loudly, "O people of my Household: it was time for prayer". Having said that he would recite the following verse:

Citing a tradition narrated by Imam Ahmad Bin Humbul, Shaykh-ul-Islam said that Hazrat Fatima (AS) was present in the company of the Holy Prophet (SAW). Hazrat Ali (AS) also happened to come along with both princes, Hassan and Hussain (AS). The Holy Prophet (SAW) asked all of them to get closer to him. He made Hazrat Ali and Hazrat Fatima sit in front of him and both Hassan and Hussain on his right and left in his lap and covered them all with his mantle. He recited the following verse: 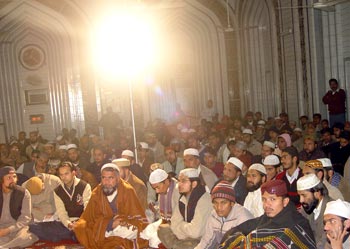 Afterwards, the Holy Prophet (SAW) offered the prayer "O Allah; they are people of my Family". That means that they are five pious souls. Shaykh-ul-Islam said the people of the Family meant the entire family of the Holy Prophet (SAW). But Hafiz Ibne Kathir, the student of Allama Ibne Taimeya quoted more than 20 authentic traditions from 'Tafseer Ibne Kathir" under that verse and established that the Household covered particularly Hazrat Ali (AS), Hazrat Fatima (As), Imam e Hassan (AS) and Imam e Hussain (AS).

Shaykh-ul-Islam said that Yazid was damned and destined for hell. Hazrat Imam e Hussain (AS) also said the same about him. He said that the history of Islam was littered with those who sacrificed their lives for the cause of Islam but the martyrdom of the Imam (AS) is considered as standing at the head of all of them because majority of those who embraced martyrdom for the survival of Islam and protection of faith were related to the Holy Prophet (SAW) through bloodline. 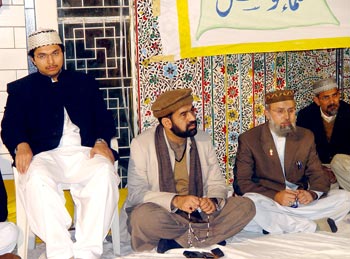 The Muslim Umma would remember the sacrifice by the family of the Prophet (SAW) till the Day of Judgment. Those who regard the clash between Hazrat Imam e Hussain (AS) and Yazid as political one aimed for acquiring power are illiterate and do not understand the real teachings of Islam. On the other hand, Imam e Hussain (AS) has the honour of being the Master of all youth in paradise.

He said that love for the family of the Prophet (SAW) is the love for the Holy Prophet (SAW). Those who cannot love the prophetic family cannot claim to have any feeling for the Holy Prophet (SAW). Bias against the people of Prophet's Household deprives one of the rewards and blessings of this world and the world hereafter. Oppression, dishonesty and rebellion against Islam were the Yazidi pattern of life. Hazrat Imam e Hussain (AS) raised the banner of rebellion against all these evils. That is why the values espoused by Hussain (AS) are being cherished by humanity across the world today, while Yazid is damned as the incarnation of oppression, evil and rebellion against Islam.

The program ended at 2:15 a.m. with the prayer. Arrangements for Sahri were made for the participants. 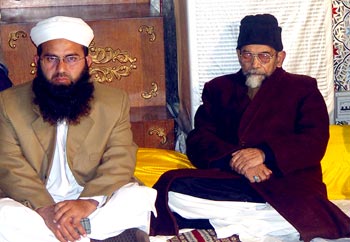 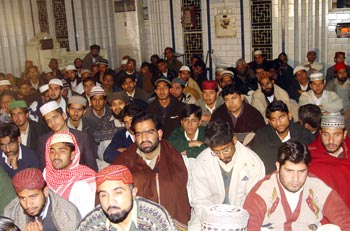