None can dare talk to me about a deal: Dr Tahir-ul-Qadri 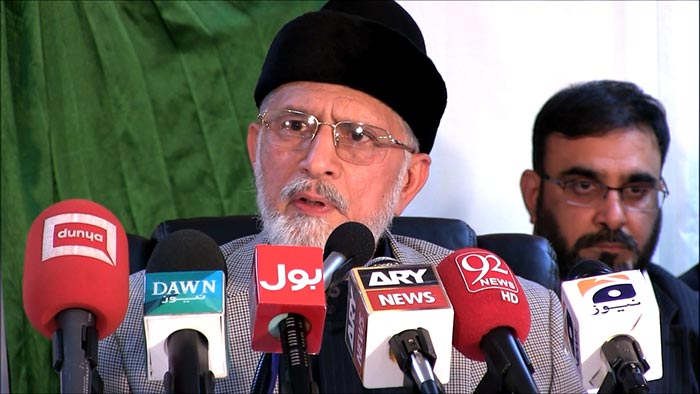 Addressing the ceremony of Quran khawani held at the central secretariat for martyrs of Model Town tragedy through audio link, PAT chief Dr Muhammad Tahir-ul-Qadri has expressed his grief on the fact that the justice system supported the killers instead of the oppressed. He said that 14 martyrs and 85 injured have not been given justice despite passage of one year. He said if there is democracy, constitution and democratic institutions, then why are hundreds of workers and the families of the martyrs and the injured have been denied justice? He said that he is thankful to the Opposition leader in the Punjab Assembly who raised the issue of Model Town carnage in the assembly and supported the oppressed.

Dr Tahir-ul-Qadri said that we believe in peaceful struggle and will continue to fight for justice till last breath of our lives. He said that the rulers killed justice by not releasing the Judicial Commission’s report on Model Town and getting the so-called fake JIT to issue one-sided report, which exonerated them in the Model town incident. He said that June 17 is a dark day in the country’s history and the people of Pakistan will never forget this day. He said that he was very grieved because on this very day, the rulers sprayed bullets on his sons and daughters and then snatched from their families the right of justice. He, however, added in the same breath that he was proud of his workers and their families who rejected the lucrative offers of super-rich rulers meant to buy their conscience and told them that they are endowed with the Prophetic love and worldly wealth cannot stop them from saying the right thing when it needs to be said.

Dr Qadri said that the nation saw the real faces of the Sharif brothers on June 17. He said that the day would certainly come when these faces will be behind bars and justice will reign supreme. He said that what to speak of clinching a deal, none of the government’s representatives dare make such an offer to him. He said that the way our poor workers demonstrated their sense of honour by rejecting the offers of wealthy rulers, who are product of the rigging themselves, should be a matter of pride for the political workers of other parties. He said that those who could not buy the conscience of my workers would not even dare talk to me about a deal.

Meanwhile, addressing the sit-in organized in front of the Punjab Assembly by MSM, PAT President Dr Raheeq Ahmad Abbasi has said that it is justice we are struggling for and will continue to do so till we succeed in getting it. He said that if the rulers cannot give us justice, then they should also kill us. He said that the wealth and power cannot silence the voice of the weak and marginalized. He said that justice will prevail in the end.