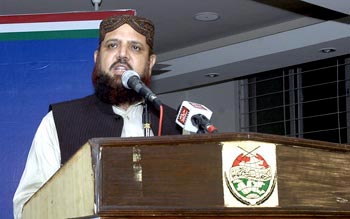 Syed Farhat Hussain Shah, President of Minhaj-ul-Quran Ulama Council, has said that the whole nation is grieved on loss of precious lives in Karachi due to intense heat wave, load-shedding and water shortage. He said that the people are suffering from extreme hardships in the holy month of Ramazan due to incompetent and insensitive rulers. He said that the masses are burning in the fire of terrorism, price hike, load-shedding and target killing. The innocent people are being muzzled in incidents of target killing, adding that unfair and unequal distribution of wealth has already played havoc with the society. He said that to add insult to the injury, incompetence of the rulers has added to the people’s woes.

Allama Farhat Hussain Shah said that the people appear to be helpless while confronted with multiple crises whereas the rulers and so-called opinion makers are observing criminal silence on their plight. He said that there is a need to seek Allah’s forgiveness at the collective level to make a fresh beginning. He prayed to Allah Almighty to rest the departed soul in peace and grant patience to their families over the passing away of their near and dear ones.

The President of Minhaj-ul-Quran Ulama Council said that if the Muslims strengthen their bond with Allah Almighty and His Prophet (PBUH), they can get rid of all crises. He said that he who does not remember Allah is forgotten by Him as well. He said that no act is superior to weeping in remembrance of Allah. He further said that no eye sheds tears unless it has the blessings of Lord with it. He said that we would have to win over the pleasure of our Creator and subject our actions to accountability in a bid to reform ourselves.

Allama Farhat Hussain Shah said that we would have to work very hard to spread Islamic message of peace and security in the world. He said that no month is better than the holy month of Ramazan to win the pleasure of our Lord. He said that dominance of materialism has snatched from us our values and traditions, adding that if we want peace to return in our lives, we would have shift from materialism to spiritualism. He said that we need to work hard to promote the culture of human brotherhood in society.