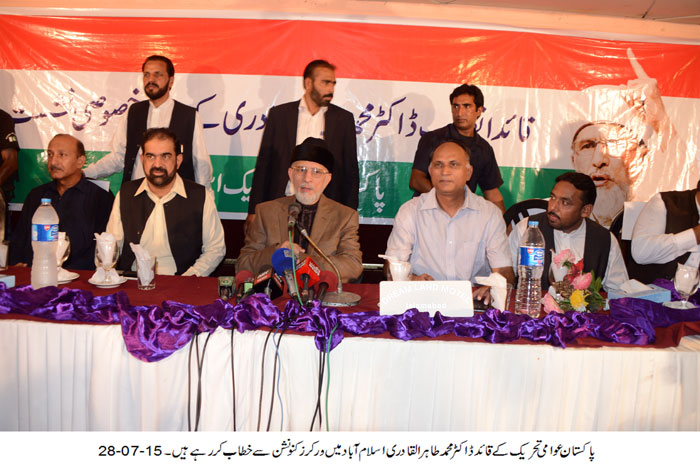 Addressing the workers convention of Rawalpindi and Islamabad on July 28, PAT Chairman Dr Muhammad Tahir-ul-Qadri has asked the government as to where is the Model Town Commission report, which has not been made public despite passage of one year, whereas the report of the Judicial Commission probing rigging charges was released without any loss of time simply because it was to the liking of the rulers. He said that the PAT staged a long march against unconstitutionally formed Election Commission and also moved a petition in the Supreme Court of Pakistan but the then Chief Justice did not show seriousness. He said that we still consider the ECP as unconstitutional and illegal. He said that the Sharif brothers established the Commissions to probe the allegations of rigging and the Commission on Model Town tragedy. He said that the report of one Commission was released after a few hours while that of the Model Town Commission has been held for last one year. He asked as to what is there in both reports whereby one was made public while the publication of the other has purposefully been delayed.

Dr Tahir-ul-Qadri said that the Minhaj Welfare Foundation is giving financial assistance to the families of martyrs, the injured and prisoners of the revolution march. He said that he had stated well before time that the Judicial Commission on rigging will give the clean-chit to the government. He said that we did stage a long march against the unconstitutionally formed Election Commission. He said that the then government signed an agreement with us in which it promised to introduce electoral reforms before the elections but it did not implement the provisions of the agreement. He said that as long as these rulers stay in power, there is no way fair, free and transparent elections can be conducted in their presence.

Dr Qadri said that he has directed the workers to start preparation for upcoming LG polls with renewed vigor and determination. He said that the present rulers are looting the country with both hands, adding that we are as determined now as we were in the past to get rid of them through political struggle. He said that he is ready to undertake the second round of struggle for revolution. He said that the PAT workers are struggling for the sake of Islam and Pakistan and defeat is a word unknown to them.

#DrQadri meeting with PAT Rawalpindi Tanzeemat. Because of huge turnout meeting have to shifted outside in lawn pic.twitter.com/KOCScyuLSz