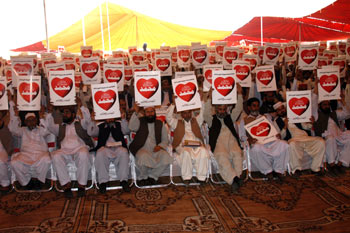 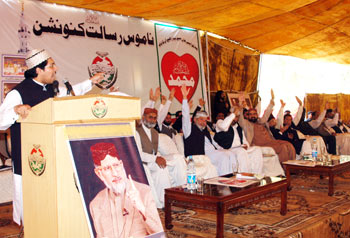 Thousands of people including associates, workers and office-bearers of Minhaj-ul-Quran from across the country attended the Convention. A large number of innocent children and women were also present at the occasion. This Convention was held in connection with annual Workers Convention of MQI.

The proceedings of the programme were formally launched with the recitation from the Holy Quran and Naat by Qari Khalid Hameed at 10 a.m.

Presenting the welcome address, Amir-e-Punjab Ahmad Nawaz Anjum greeted the thousands of workers, leaders and office-bearers of MQI from across the country. Explaining the purpose of the Convention, he said all of us had gathered today in order to show our protest against the reprehensible act of blasphemy. MQI always responded to every conspiracy against Islam in a unique manner. Shaykh-ul-Islam Dr Muhammad Tahir-ul-Qadri had written a letter to the world leaders, heads of states, International Human Rights Organizations, UN Security Council and International Court of Justice against the publication of caricatures last year. He presented the viewpoint of Minhaj-ul-Quran International that the publication of caricatures was not freedom of expression, rather it was a hidden war aimed at causing 'Clash of Civilizations'. He had expressed the need of legislation at the international level so that no one would be able to commit blasphemy against any religion. 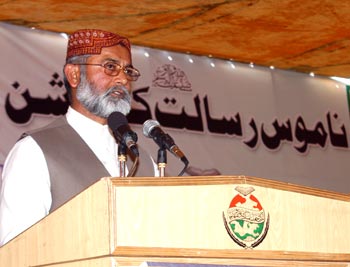 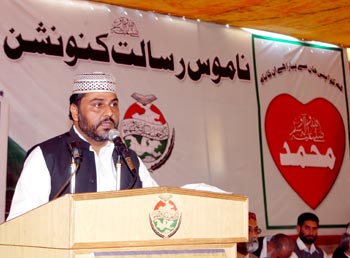 In his speech, Allama Irshad Hussain Saeedi said, the Muslims are being deprived of love of the Prophet under a carefully planned conspiracy. He cautioned the conspirators that the fire of love burning in the hearts of Muslims for their Prophet (saw) would not be extinguished by such tactics. He said all of us would have to address this conspiracy with wisdom so that our enemy dared not repeat this act again. 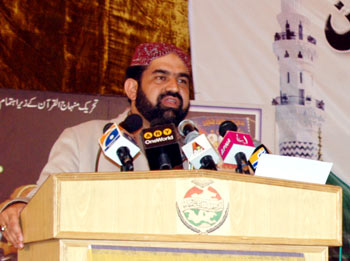 Nazim-e-Ala Dr Raheeq Ahmad Abbasi said in his talk that this was not the first incident of blasphemy. This tradition of blasphemy started when the Holy Prophet (saw) came to this world. The enemies of the Prophet (saw) hatched conspiracies right from the beginning. The servants of the Prophet (saw) paid back by further elevating the status of the beloved Prophet. We are gathered in this "Namoos-e-Risalat Convention" in this backdrop. Minhaj-ul-Quran International is a Movement tasked with achieving the revival and renaissance of Islam and its leader Shaykh-ul-Islam Dr Muhammad Tahir-ul-Qadri is the revivalist of the century. That is why our manner of protest against blasphemy is unique. He said we have decided to hold the upcoming International Milad Conference as a response to the blasphemous attempts with a view to popularizing the love for the Prophet (saw). We have vowed to spare no efforts for spreading this great movement of Milad-un-Nabi (saw) across every nook and corner of the world. 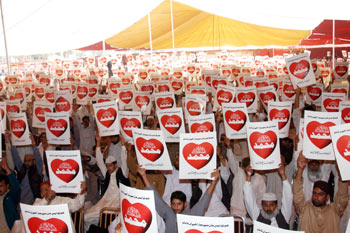 Nazim-e-Ala said Islam was undergoing a Makki period in this war of clash of civilizations. The Muslim Umma is being disgraced everywhere. The conspiracies to dominate Islam are the order of the day with the result that the pride in the religious association has gone. The western values are being imposed on the Muslim Umma. No ruler of the Islamic countries has the courage to confront the conspirators and devise an action plan to counter them. He also declared that marches will be held on March 7, 8 and 9 to celebrate the onset of the month of Rabi-ul-Awal accompanied by a Milad Caravan. Widespread media campaign will be also arranged in this regard. At the occasion of Milad Conference this year, twelve thousand new people would declare their joining of Minhaj-ul-Quran international. One thousand of them will be life members.

At the conclusion of his speech, Nazim-e-Ala presented condemnatory resolution against the republication of blasphemous caricatures. Thousands of participants stood up from their seats and raised their hands in favour of the resolution by holding posters bearing the name 'Muhammad' on the image of heart. The representatives of national and international media captured this moment. In addition to thousands of participants, the guests at the stage also supported the resolution by displaying the posers bearing the name of the Holy Prophet (saw). Nazim-e-Ala demanded of the International Court of Justice to take action against those responsible for this crime. 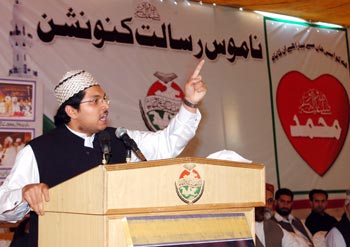 After the adoption of the resolution, MQI announced to launch this poster campaign bearing the name of the Prophet on the image of heart throughout the world.

Addressing the participants, Sahibzada Hussain Mohi-ud-Din Qadri said that those behind this reprehensible move of publication of caricatures want to provoke Muslims with an intention to prove them extremists and fundamentalists. Therefore, the Muslims should see through their game plan and respond back with wisdom. The expression of extreme love for the holy Prophet (saw) during the month of Rabi-ul-Awal can be one such way of a healthy response. He said the followers of the Prophet (saw) would never tolerate such nefarious actions, which reflect even an iota of blasphemy and disrespect towards their revered Prophet (saw). He said Minhaj-ul-Quran International would hold International Milad Conference in which hundreds of thousands of people would participate and show their love for their Prophet (saw). He said the time is not far when this message of love of the Prophet would reach in length and breadth of the world. 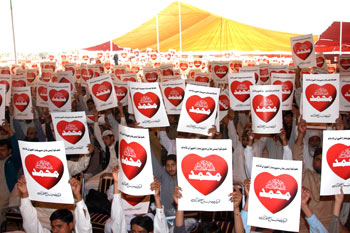 Addressing the audience telephonically from Canada, Shaykh-ul-Islam Dr Muhammad Tahir-ul-Qadri said the personality of each Prophet is the pivot of love, devotion and commitment for followers of every religion. The relationship of love with the Prophet of Islam (saw) is the basis of faith of every Muslim and every law of the world guarantees the sanctity and respect of these holy personages. The act of republication of these caricatures has hurt the feelings and emotions of more than one billion Muslims across the globe, which is highly condemnable. Such steps in the name of freedom can endanger the peace of the world paving the way for much-dreaded 'Clash of Civilizations'. Such steps may also endanger the inter-faith harmony. He said the publication of these caricatures is the violation of human rights and demanded of OIC, International Court of Justice and UN to immediately take notice of such actions and take appropriate measures so that no further damage is caused to the international peace and inter-faith harmony. 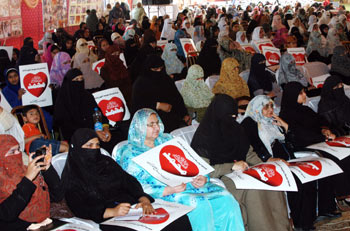 2-    Thousands of people from across the far flung areas of Pakistan participated in the Convention and warm welcome was extended to them upon their arrival.

3-    Women were also present in the Convention in a large number and one/fourth of the Venue was reserved for them.

4-    The Venue was decorated with beautiful canopy and chairs.

5-    On the drop-banner hung at the back of the stage was displayed an image of human heart in red colour with name'Muhammad' written in the centre.

6-    Entrance of the honourable guests was from the back of the stage where fool-proof security arrangements were in place.

7-    Lady police officials were standing alert on that side of venue where women were to enter. The internal security was 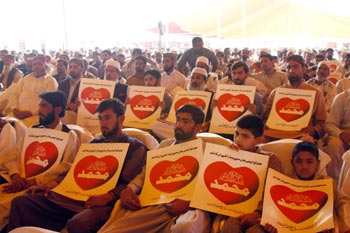 provided by a team of Minhaj-ul-Quran Women League.

8-    Flex pictorial banners on the life of Shaykh-ul-Islam were hanging from all the four sides of the Venue.

9-    One entrance door was fixed in view of strict security arrangements where police guard stood watchful.

10-     In the rear of the Venue various stalls were established.

12-    Arrangements for provision of cold water were also made.

14-    Separate arrangement at the central sale centre was made for women.

15-    Sahibzada Hussain Mohi-ud-Din Qadri came to the stage at 12:45. Thousands of participants stood up from their seats and welcomed him in the thunder of their clapping.

17-    At the time of passage of resolution, the participants held up the poster bearing the name 'Muhammad' on the image of the heart for five minutes and expressed their feelings.

19-    During the address of Nazim-e-Ala, a private TV channel recorded the interview of Sahibzada Hussain Mohi-ud-Din Qadri.

20-    In the second phase of the programme, Shaykh-ul-Islam addressed the gathering.

21-    Before the concluding prayers, participants were served lunch. 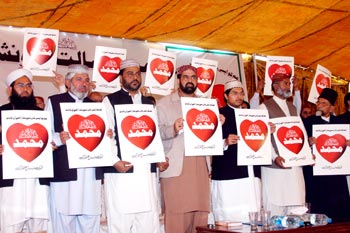 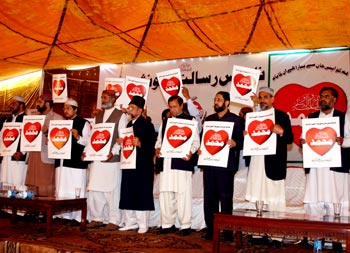 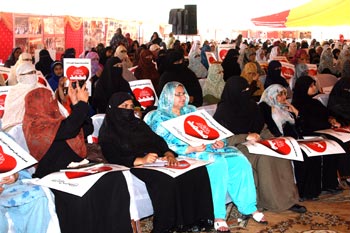