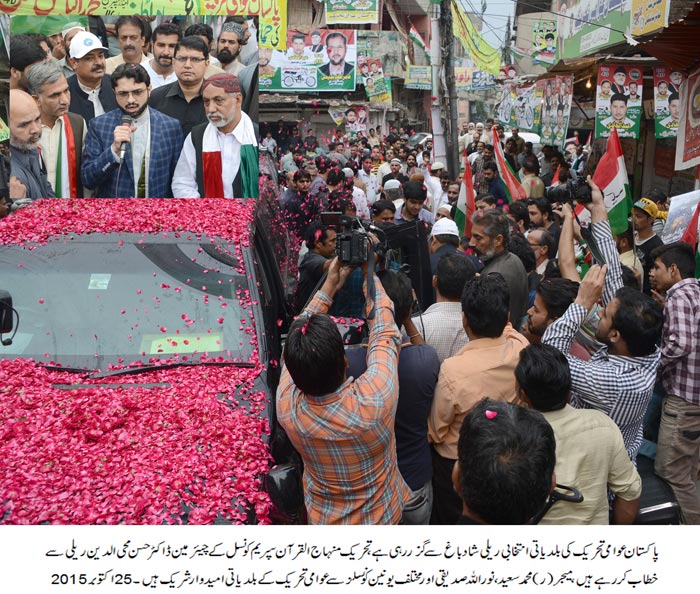 The hundreds of motorcyclists took part in the rally from Kot Khawaja Saeed to Jallo More. They were chanting slogans in favour of revolution and Dr Tahir-ul-Qadri. A very warm welcome was extended to Dr Hassan Mohi-ud-Din Qadri along the route. The people showered rose petals on him as he stopped by to speak to them. Muhammad Umar, Abdul Khaliq, Shafqat Mughal, Haji Ashraf, Abdul Hameed Khan, Qari Shabbir, Malik Javed Awan and Emmanuel Masih and others attended the rally from various union councils.

Haji Salah-ud-Din Sultani and Bashrat Ali, PAT candidates for chairman and vice chairman’s slots, gave a warm welcome to Dr Hassan and hundreds of participants of the rally and hosted luncheon in their honour.

Speaking on the occasion, Major (r) Muhammad Saeed said that the PAT is waging a struggle to eliminate corruption, unemployment, poverty and terrorism from the country. He asked the people to use the power of ballot to stop the corrupt lot from coming to power. He appealed to the people of Lahore to put their stamp on the electoral sign of ‘motorcycle’ to cleanse the local government institutions of Lahore from corruption and mismanagement.