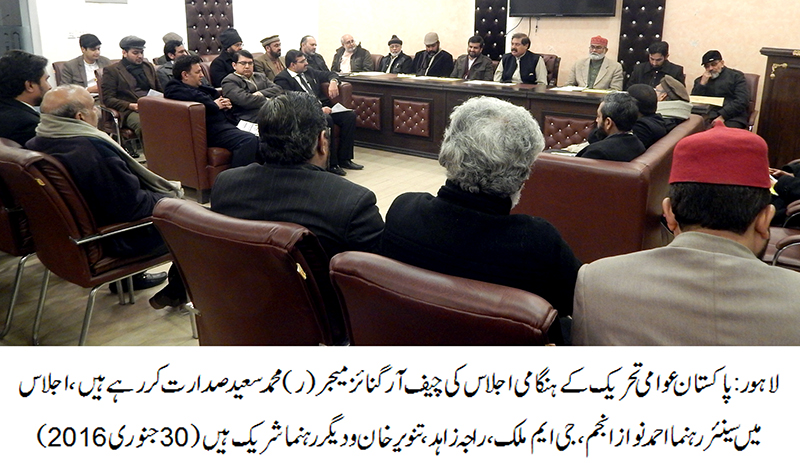 An emergency meeting of PAT was held in the central secretariat the other day with Chief Organizer Major (r) Muhammad Saeed in the chair. The meeting described the reduction in prices of POL products as a grave joke with the people who were expecting substantial relief. It demanded the reduction of Rs. 30 per litter giving the downward trend of prices.

In response to the Prime Minister’s ignorance about price of potato per kg, the participants of the meeting said that the PM belonged to another world where he did not know what situation were the poor pitted against in their day-to-day lives. The meeting was attended by senior leaders namely GM Malik, Noorullah Saddiqi, Sajid Bhatti, Raja Zahid, Tanvir Khan, Ahmad Nawaz Anjum, Shahzad Naqvi, Mazhar Alvi, Hafiz Ghulam Farid, Haji Ishaq, Engr. Sanaullah, Irfan Yousaf, Afnan Babar and others.

A resolution adopted in the meeting demanded of the change of route of the Lahore Orange Line, saying that the project poses a threat to cultural heritage and is brining a bad name to the country.

Expressing his views, Major (r) Muhammad Saeed said that ten million people of the province are on the side and the stubbornness of one person is on another vis-à-vis the Lahore Train Project. He said that the worst kind of violation of fundamental rights is being committed by not paying compensation to the affectees whose houses and shops have been demolished.

GM Malik said that those who shed the blood of innocent people in Model Town do not give a hoot to the heritage and historic buildings. He said that the people are getting displaced and losing their jobs due to craze of the present rulers with the so-called development works.