Thousands of the faithful join the ‘Iitkaf City’ 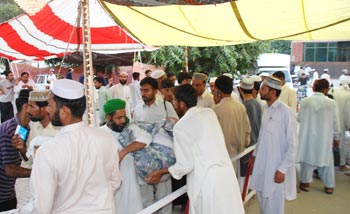 On September 21, 2008, thousands of the faithful from across Pakistan and the world joined the ‘Iitkaf City’ in the blessed company of Shaykh-ul-Islam Dr Muhammad Tahir-ul-Qadri under the aegis of Minhaj-ul-Quran International. This is the eighteenth Iitkaf gathering presently under way for understanding of faith, ones spiritual excellence, repentance and reform where the participants would remain engaged in a number of religious activities for ten days.

People had started to pour in one day prior to the actual start of Iitkaf, whereas the process of the arrival of participants continued all day long till evening prayer on September 21. The Iitkaf City has been extended to the playground adjacent to the Jamia al-Minhaj where separate residential apartments have been set up. Quite a good number of youth is also participating in this year’s Iitkaf. A separate residential facility has been provided for the elderly participants.

In view of arrival of thousands of participants, ten entry points were fixed where stringent security arrangements were in place. Separate Iitkaf arrangements have been made in Minhaj-ul-Quran College for Women and Minhaj University which would be attended by hundreds of women from across the world. 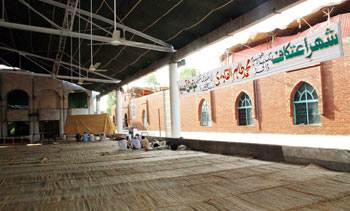 A very warm welcome was extended to the participants by the central leaders of Minhaj-ul-Quran International and reception committee upon their arrival in the Iitkaf City. The guests were garlanded. After reviewing the arrangements, the head of Iitkaf Committee, Sheikh Zahid Fayyaz, expressed his satisfaction and handed over the charge to the in- charge of sub-committees.

Nazim-e-Ala MQI Dr Raheeq Ahmad Abbasi briefed the media men who came to cover the Iitkaf city along with other leaders of MQI. He said that hundreds of participants would listen to the speeches of Shaykh-ul-Islam Dr Muhammad Tahir-ul-Qadri in addition to performing other religious activities. He said better arrangements were put in place as compared to the last years.

It should be kept in mind that the series of Dr Muhammad Tahir-ul-Qadri’s lectures on the Holy Quran would start on the night of September 21, 2008. His address would take place at 11 pm and continue till 2 am. Juma-tul-Wida’ and the spiritual gathering on 27th of Ramdhan would be covered live on different TV channels.