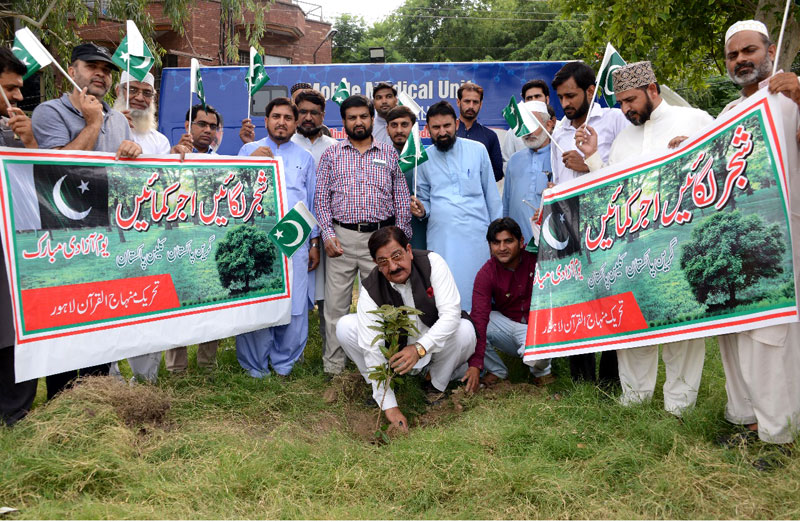 Minhaj-ul-Quran International (MQI) Lahore launched the tree plantation drive today as part of the 71st independence anniversary celebrations by planting saplings under the slogan of ‘Green Pakistan, Clean Pakistan’. PAT Secretary General Khurram Nawaz Gandapur, MQI Lahore leader Hafiz Ghulam Farid, Sanaullah Khan, Rana Tajammul, Younis Noshahi and others planted the saplings on the occasion. The campaign will continue during the month of August in which one million plants will be planted. Walks, seminars and conferences are also being held as part of awareness drive in which the students and teachers of the colleges and the universities are taking part in the campaign.

Speaking on the occasion, Khurram Nawaz Gandapur said that Every Pakistani should plant at least one sapling during the month of independence and play his/her role in making the country green. He said that campaign to plant a sapling will continue across the country for one month.

Khurram Nawaz Gandapur said that tree planation campaigns are an annual feature wherein rulers, ministers and district administrations engage in the plantation and thousands of trees are planted every year. He however added in the same breath that due to lack of proper care, these saplings cannot grow and the requisite results are not attained. He said that if 20% of the saplings of those planted in a year had stayed on, we would not have been faced with such dire circumstances.

The PAT Secretary General said that it is unfortunate that despite pumping in millions of rupees, the forest cover of the country has been decreasing. He said that against the world average of 25%, our forest cover is only 4%, which is a scary situation. He said that for a country like Pakistan which is confronted with the scourge of climate change and extreme weather patterns, trees can provide us with necessary space to offset the ill effects of the climate change. He demanded strict action against the practice of tree cutting and said that those engaged in such activities should be meted out exemplary punishment.

MQI Lahore leader, Hafiz Ghulam Farid, said that tree planation is the need of the hour and the MQI would play its national duty in not only making this campaign a success but also raising awareness about it. He said that we would celebrate the Independence Day with the slogans of planting to protect our tomorrow and that of our succeeding generations.