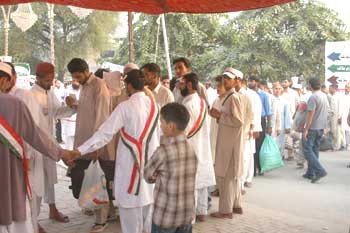 Alhumdulilah with the Praise and Blessings of Almighty Allah the annual I’tikaf gathering has again begun at the Minhaj-ul-Qur’an headquarters in Lahore, starting on the evening of the 19th of Ramadan, 2nd October 2007. Every year thousands of mutakifeen flock to the Minhaj-ul-Qur’an mosque in Lahore to sit in the ten days of seclusion. They travel from the length and breadth of the country as well as from the rest of the world. The I’tikaf gathering, under the spiritual guidance of Shaykh-ul-Islam, Dr. Tahir-ul-Qadri is the third largest gathering in the entire world, after Harm Shareef in Makkah and Masjid e Nabi in Madina. 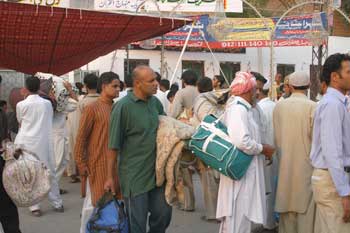 However what is more unusual is that it is not only men who sit in I’tikaf at the MQ mosque, but thousands of women also come from around Pakistan to take part in this ten day spiritual training camp. The sisters sit at the Minhaj-ul-Qura’an Girls Shariah College, which is completely cordoned off and solely dedicated for the I’tikaf gathering during the last ten days of Ramadan (for a more detailed report of the sisters I’tikaf click on www.minhajsisters.com. The brothers sit in specially arranged accommodation at the Minhaj-ul-Qur’an Mosque and also in its ground through the establishment of huge tents and wudu facilities. Insh’Allah this year it is again expected to be a great success, with unprecedented numbers registering this year running in to the tens of thousands. 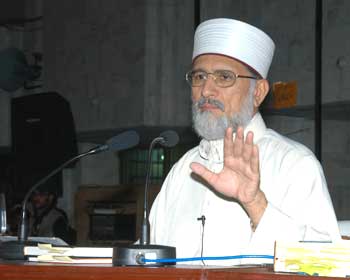 Those who come to sit in I’tikaf come from all walks of life and backgrounds. Some are local bothers and sisters of Lahore who find it fairly easy to leave their homes and come without any hesitation. However hundreds of other brothers and sisters come from different parts of Pakistan, including Sind, Balochistan and the Northen Frontier Areas, often having to convince their families to allow them to come. Indeed it is a great achievement for sisters in particular to leave their families, homes and heavy responsibilities and devote their entire time to the obedience and worship of Allah Almighty. 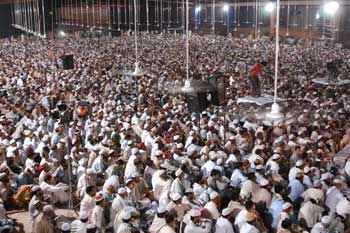 During I’tikaf the young sit side by side with the old, the male professional lawyers and engineers sit with the brothers who sell fruit on the streets, shoulder to shoulder. The female doctors and teachers sit with housemaids. The wealthy brothers and sisters sit, eat, sleep and prayer with those who have very little material comforts, sometimes in quite cold or humid conditions and happily engage in their ibadah together, putting aside their prejudices. 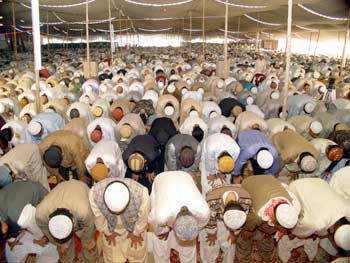 The day normally begins at thahajjud time, through the reading of nawafil and recitation of the Holy Qur’an. Then after Fajr prayers the mutakifeen will engage in collective Dhikr of Allah and then recite nasheeds to strengthen their love and relationship with Allah Almighty and the Holy Prophet (peace be upon him). After the mehfil and Dhikr the mutakifeen are left to read their own wazaif, consisting of Slat-ul-salam, Darood and selected verses from the Holy Qur’an. 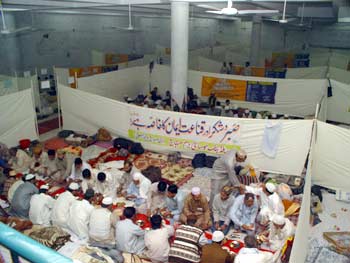 Once these are completed the mutakifeen gather again and perform salat-ul-tasbih collectively, after which the daily schedule of lectures begin. The mutakifeen are placed in small groups/halaqha’s and are briefed on a variety of Islamic subjects depending on the requirements of the group. After Zuhur prayers Shaykh-ul-Islam, Dr. Tahir-ul-Qadri’s lecture begins on different subjects, last years specialty concentrating on Imam Qadi Iyad’s (r.a) ash-Shifa bi-tareef haquq al-mustafa’. This is viewed by the sisters through a live television link with many televisions as well as an enormous projector screen used to ensure the sisters are fully accommodated. A break for Asr prayers is taken after which the mutakifeen are left to perform their own individual ibada’at until iftar and salat-ul-maghrib. The mutakifeen then perform collective Isha prayers and tarawih prayers, followed by Shaykh-ul-Islams second lecture on tasawuf. After the lecture the day will end with collective Dhikr of Allah Almighty. 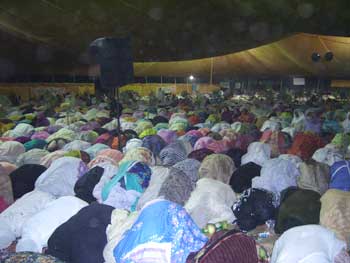 Many mutakifeen have been coming regularly for the last 10-15 years, but every year there had been an enormous rise in numbers, and the new participants all say that the experience is a life changing one. From the beginning the mutakifeen are told that sitting in I’tikaf is not just to eat less but also to sleep and talk less. Many mutakifeen for instance have never sat together and participated in collective Dhikr so the sounds of thousands of mutakifeen reciting the name of Allah or Allah Huh is a profound emotional experience. Others have never functioned with such little sleep and are amazed at their own stamina and lack of fatigue despite the rigorous schedule. Moreover most feel that this is in reality like a training camp for the rest of the year, a process of self-purification, tazkiyyah and then training, tharbiyyah for the heart, soul and egotistic desires of the nafs in order to combat the materialistic temptations of the world one faces in daily life. 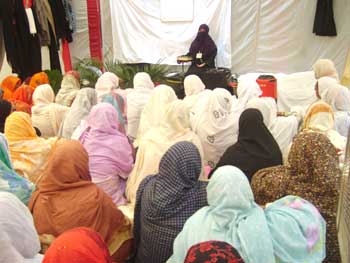 During this time much credit also has to be given to the organisers of the event who work night and day solely for the benefit of the mutakifeen. The event for the brothers is organized by the Central Team of Minhaj-ul-Qu’ran, Shariah College students and the Men’s League throughout Pakistan. The sisters’s event is organized by the Minhaj-ul-Qur’an Women league and the students of the college, all who volunteer their services to look after the entire process. 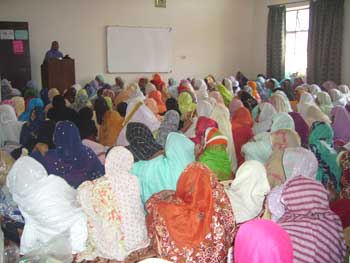 Catering for sehr and iftar for thousands of mutakifeen is indeed a huge task, given the limited times for eating before the fast begins and then ends and preparations for salat. Moreover keeping the place clean for the mutakifeen is also a massive job, but Alhumdulilah the great dedication of all of the Minhaj-ul-Qur’an workers, students, staff and as well as the Brothers and Sisters make things run smoothly, even if it means some of the organizers often have no time to either eat anything at sehr and then just grab a few morsels of food at iftar.

May Allah Ta’ala accept the humble efforts of all those involved. Ameen.